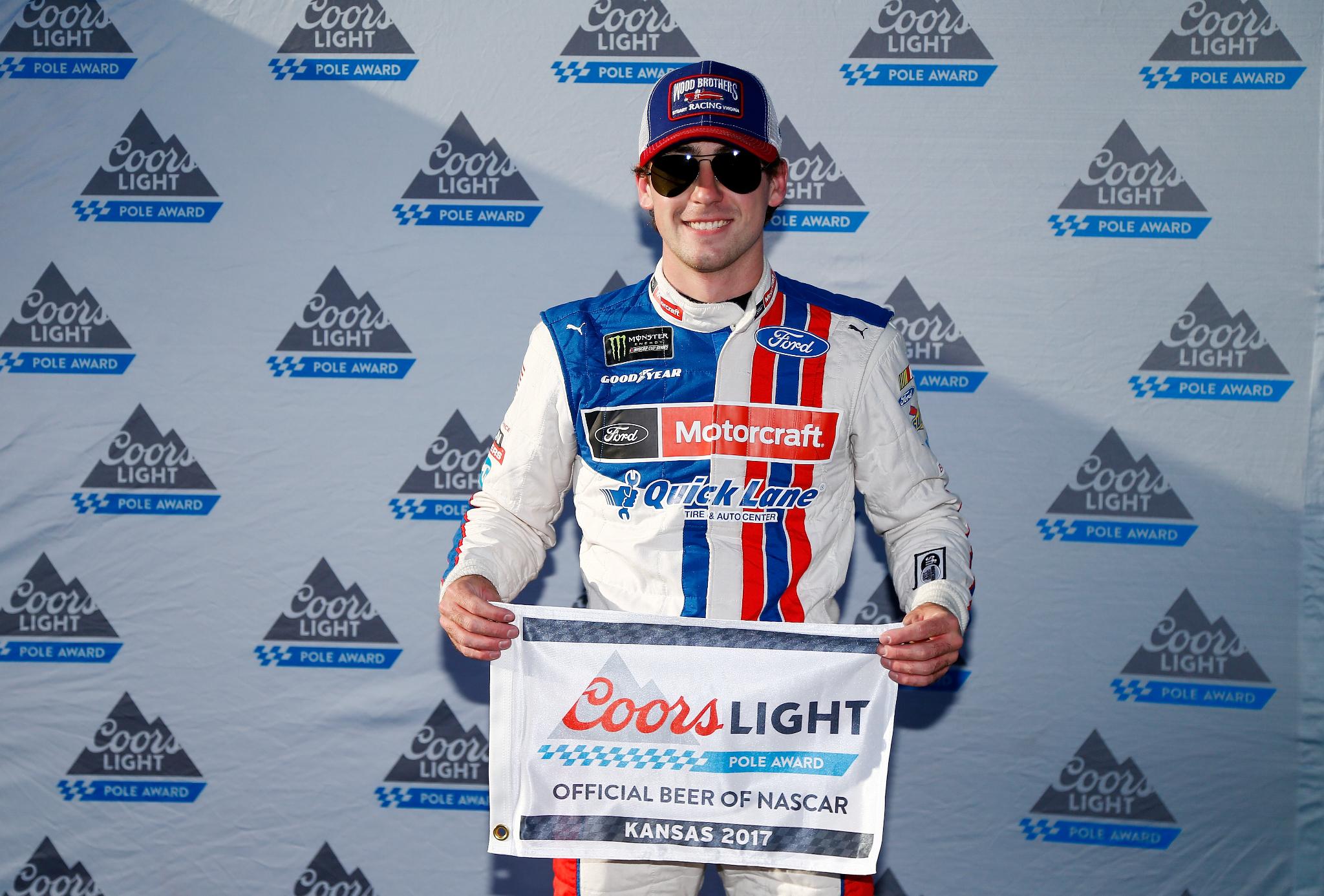 Improving in each round of knockout qualifying in relation to other cars, Ryan Blaney won the pole for Saturday night's Go Bowling 400 at Kansas Speedway (7:30 p.m. ET on FS1), claiming his first career pole by a mere 0.009 seconds over Joey Logano.

During a Friday qualifying session in which 11 cars failed to make it to the grid because of inspection issues, Blaney toured the 1.5-mile speedway in 28.481 seconds (189.600 mph) in the final round to earn the first Coors Light Pole Award for the No. 21 Woods Brothers Ford since Ricky Rudd earned the top starting spot at Talladega in April 2004.

Before that, the last Wood Brothers pole came in 1984 at Atlanta, with Buddy Baker behind the wheel.

Kyle Busch and Kevin Harvick finished 1-2 in the first two rounds of time trials-with Busch posting the fastest lap of the day at 190.624 mph in the second round-but Blaney was fastest when it counted, on his third run on tires.

"I didn't know during the first two rounds if we would have enough," said Blaney, who will lead the field to green in the 11th Monster Energy NASCAR Cup Series race of the season. "The 18 (Busch) and 4 (Harvick) were really fast. We got our car better and better each round, and that's what you want. That's what we did. We have improved a lot on that this year. Last year I always thought we kind of got worse, if anything.

"This year has been a big step up in qualifying. Your car and the track change, and you have to be on top of that. We've been really close a couple times this year, but it feels good to get it done. I know it's only qualifying, but it feels really cool to get this first pole. It says a lot about this entire team."

A native of nearby Emporia, Kan., Bowyer was bitterly disappointed in not being able to qualify in front of his home crowd.

"This is just-wow!-super disappointing," Bowyer said. "You're off ten-thousandths of an inch. It's ridiculous. Most people can't even understand how little that is. I get it. If you are off, you are off, but I watched my guys move the car and adjust the car accordingly for it and then actually overcompensate on it, because we were worried about not making it.

"Then they wheel it back in and fail the exact same amount? Twice? That makes no sense. None."

But as NASCAR senior vice president of competition Scott Miller pointed out, 28 cars made it through inspection in time to qualify.

"It's fairly disappointing that they can't present their cars to pass inspection," Miller said of the cars that failed. "There were 28 cars that did pass inspection, so it's certainly possible to get it right.

"It's the LIS, where we measure the rear steer of the car, which is a big performance metric. It's something that everybody pushes to try to get right to the limit. They want to be right on the limit, and obviously, 11 of them were over the limit."

A 12th car, the No. 95 Chevrolet of Michael McDowell, blew an engine during practice and opted out of qualifying. McDowell will start the race 35th on owner points.

The 11 cars that failed inspection, plus McDowell's, will line up at the rear of the field according to owner points, led by Johnson in 29th.