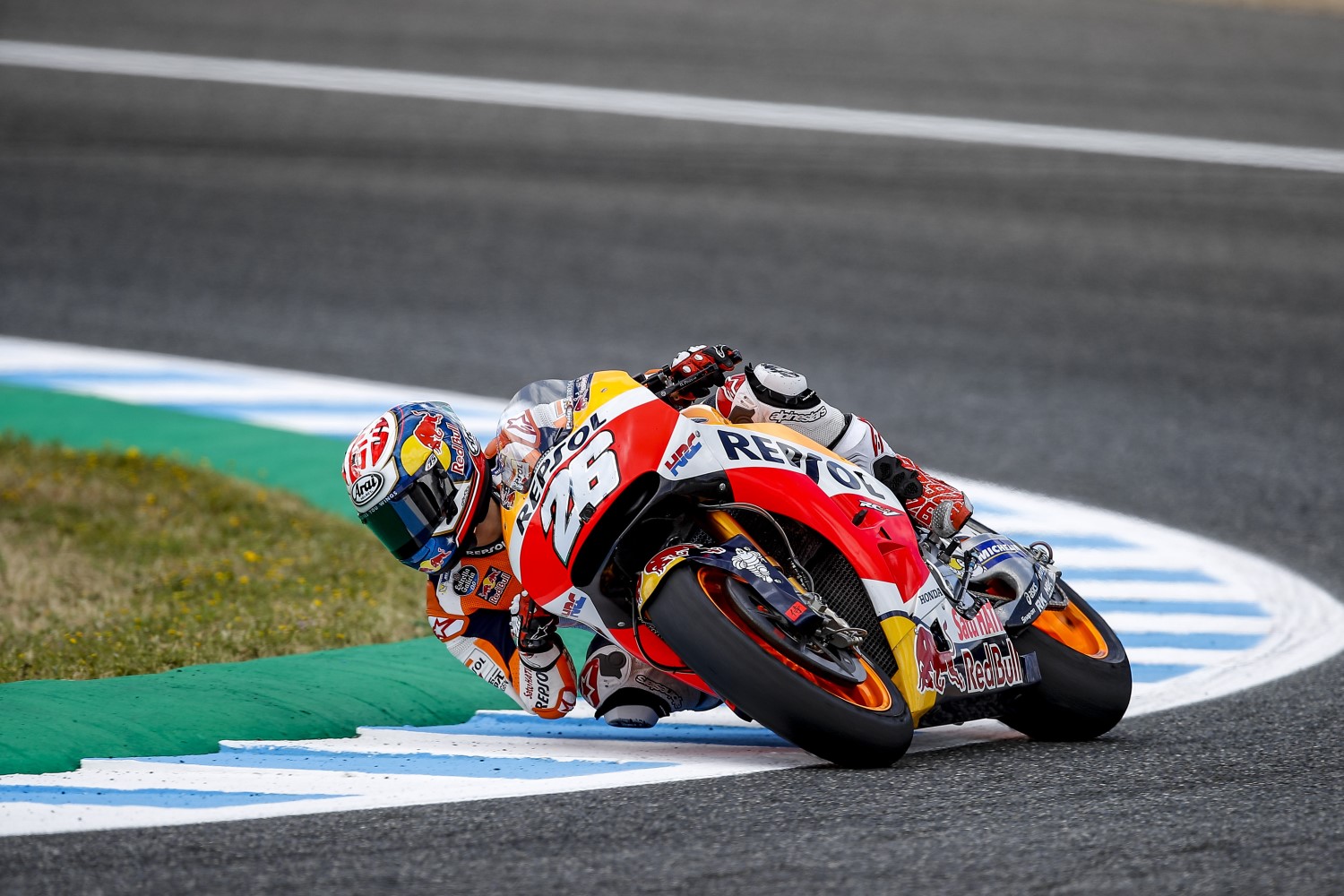 The Spaniard led from start to finish to win for the first time since last September's race at Misano, while Jorge Lorenzo recorded his podium with Ducati.

Pedrosa led away from pole position and quickly opened a near two-second lead over Marquez, who was running a Hard/Hard tire strategy, as opposed to Pedrosa's Hard/Medium approach.

Marquez, having swatted away a threat from Tech 3's Johann Zarco, began to close on Pedrosa, briefly getting the gap down to a second, but was unable to draw any closer.

The pair lapped within a second of each other for much of the race before Pedrosa stormed clear across the final couple of laps, winning by 6.1s, as Marquez accepted second best.

Both Repsol Honda riders finished significantly clear of Lorenzo, who bounced back from early-season struggles to complete the podium, his first top-three finish since joining Ducati.

Lorenzo made early progress from eighth on the grid, running the Medium/Medium tires, before overhauling Zarco, ensuring a Spanish 1-2-3 upon the category's first visit to the country this season.

[adinserter name="GOOGLE AD"]Zarco emerged as the lead Yamaha rider in fourth, via an aggressive initial spell in which he passed Maverick Vinales, Cal Crutchlow and Andrea Iannone in the space of a single lap.

Zarco finished just three-seconds shy of Lorenzo as he secured the best result of his nascent MotoGP career.

Andrea Dovizioso completed a fine day for Ducati, rising from 14th to fifth, but the factory Yamaha squad endured a dismal race.

Vinales struggled to sixth spot, while team-mate Valentino Rossi was unable to provide any fight during the closing stages amid worsening lap times, tumbling to 10th spot, narrowly holding on to the title advantage.

Scott Redding finished 11th for Pramac, while Hector Barbera edged Loris Baz by just 0.012s as the Avintia riders dueled to the line.

Bradley Smith bagged a couple of points for KTM in 14th spot, with Karel Abraham 15th, as both Sam Lowes and Suzuki debutant Takuya Tsuda reached the checkered flag, albeit adrift of the pack.

LCR Honda's Crutchlow challenged for the podium places during the opening laps but slid off at the high-speed Turn 11, and was joined in the gravel trap by KTM's Pol Espargaro, who suffered a similar fall.

Iannone rose to third at the start but slipped back to the lower fringes of the top 10 before crashing out, compounding a difficult weekend for Suzuki.

Tito Rabat was another faller while top 10 contender Jack Miller angrily remonstrated with Alvaro Bautista after the pair came together at Turn 1, causing both to retire.

Dani Pedrosa
I’m super-happy with this win in Jerez, a track that I love very much, and in front of my family, my friends, and all these amazing fans. I’m enjoying this emotion so much, more than I would’ve done a few years ago, in a more ‘conscious’ way. I’ve had a great feeling all weekend, and the team have worked so well; we’re getting better race by race and I’m very happy for them as well. We knew we were in a position to have the race we actually did. I felt the tension a little bit before the start, but I remained concentrated and got away well at the start and just went for it. Today the track conditions were a bit worse than yesterday and the front was sliding quite a lot. I chose the hard front because of today’s high temperature, even if the medium was my favorite. The pace probably would’ve been faster with the medium, but anyway I was happy with my choice. When Marc started to push, we started a little battle like yesterday in qualifying. I knew he was very fast but I was determined to keep a gap on him. It was easy to make a mistake, to lose the front, so it was a matter of staying on the limit without going over it. It went well, it was a marvelous weekend, and we now must continue at this level. It’s also a special honor to be the winner of the 3,000th Grand Prix race and be alongside riders like Mick (Doohan, who won race number 2,000) and Angel (Nieto, who won race number 1,000).

Marc Marquez
I’m happy with today’s second place here at Jerez, a track that isn’t among my favorites, and having been able to be competitive and fight at a high level is very positive. Today Dani was really fast, as he has been over the whole weekend, in the wet and the dry. We got closer and closer session after session, but it was difficult to keep his pace. Today I tried to push, to put pressure on him, but even before the race I knew that Dani is very strong here. He’s also very good when conditions are really warm like today, because for me the front tyre is too soft; I mean, I chose the harder option today but even that was too soft for me. I tried to manage during the entire race, and I pushed. In the end I had a few risky moments, so I checked where Valentino and Vinales were and said to myself, Okay, second place is fine. I’m very happy with the result, to be just four points off the top and to be back in the battle for the Championship. The classification is very close and things are going to be very interesting. We must keep working as we’ve done so far. I dedicate this good result to my mom as today is Mother’s Day.