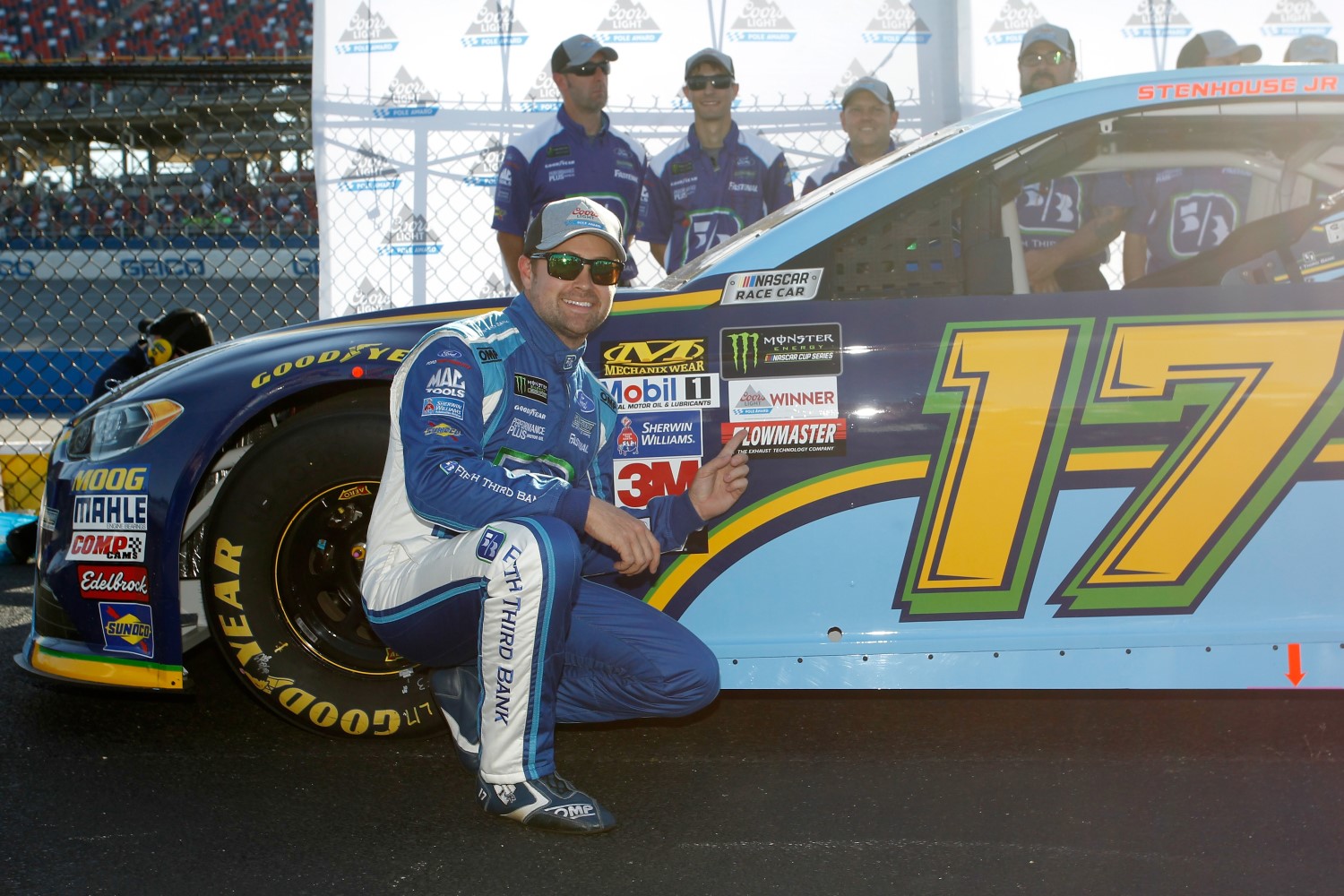 In Monster Energy NASCAR Cup Series time trials, Stenhouse Jr. placed his team, Roush Fenway Racing, on the front row for the first time this season with a speed of 191.547 mph. It was also Stenhouse Jr’s first career pole at Talladega and his first since 2013 at Atlanta. Earnhardt Jr., a six-time Talladega winner, was clocked in at 190.780 mph, earning him the runner-up spot. Previously, his best starting spot was third on three different occasions.

Stenhouse Jr. has struggled in the No. 17 Fifth-Third Bank Ford over the past couple of seasons, but is coming off a fourth-place finish at Richmond International Raceway last weekend. The 29-year old hopes that leading the field to the green in Sunday’s GEICO 500 will help continue the momentum.

[adinserter name="GOOGLE AD"]“It’ll be nice to lead the field to green here," Stenhouse Jr. said. “There’s a lot of difference. The culture at our shop is just different. The guys want to work there. They want to show up to work and work harder. They’re seeing that working harder is making different results for us, so it’s been a blast for Trevor and myself to drive these race cars each week."

“We would have loved to have gotten the pole," Earnhardt Jr. said. “(Ricky) Stenhouse and those guys had a really fast car, so congratulations to them and Roush/Yates Engines and all those guys had great power. The Hendrick guys have been doing a great job. We always kind of come down here and find ourselves with an opportunity for the pole. Hopefully, we will get one before the year is out at one of these plate tracks. I know the guys have been so close at Daytona and Talladega for so many years, so it would be great to do it this last season together. Just came up a little short today, but the car is fast, and it will be good for Sunday."

Stenhouse was also fastest in the first of two rounds of qualifying. Denny Hamlin was the last driver to make the 12-car cut for the final round, edging Martin Truex Jr. for that spot by .011 seconds.

D.J. Kennington, attempting to make his second Monster Energy Cup start of the season for Gaunt Brothers Racing, was the only driver who failed to qualify for the 40-car field.

DID YOU THINK YOU HAD THE LAP ON THAT FINAL RUN TO GET THE POLE?
“Uh, it was a little more than a fraction he was about a quarter of a second faster, quite a bit. You know it was really close, obviously, in the first round and guys are going to pick up a little bit. They start us a little further down pit road, so everybody is going to run a little quicker and that is a pretty neat little trick to make sure everybody goes a little faster in the second round. But, you just don’t know really what everybody’s got. Guys are going to do little things with air pressure and so forth. We just didn’t pick up as much as he did. Really impressive run by Stenhouse and his guys and we come close. We seem to come close at Daytona and Talladega quite a bit. We are either second or whatever, but can’t seem to get the pole. Hopefully, we can get one before the season is out. It would be nice to get one in my last year knowing that I don’t really qualify all that well. Not much of a qualifier myself, but especially since we went to these two, three rounds, I don’t think I’ve gotten a pole since. It would be nice to get one before the end of the season."

FIRST FRONT ROW START HERE AT TALLADEGA:
“Well, that’s good I didn’t know that. Yeah, the car is really fast and that gives us good confidence in the speed of the car. There were a couple of things, obviously, we didn’t get to practice a lot, so there are a couple of things I felt out there during my lap I didn’t like about the way the car drove, so that was good to be able to see that and feel that and maybe we can address it before the race."

HOW MUCH DOES IT MEAN TO BE ON THE FRONT ROW HERE? DOES IT MATTER THAT THERE WERE ONLY 14 MINUTES OF PRACTICE FOR THIS RACE?
“It wouldn’t have mattered as far as with the way the rules are for the plate tracks, pretty much what you unload is what you’ve got. Guys don’t really find a lot of speed in practice. You just go out there and find out whether your car is quick in the pack or not and if it ain’t you are just disappointed. Not much you can do about it, but if it is you are happy. We didn’t really get to find out much in practice. It does give the guys an idea of… travels are really critical and how much the car travels and getting it just right, getting the splitter just right on the ground, not too low, not too high, all that good stuff. So, being able to get on the track at least for a lap or two was really good for all the teams that had that chance."

ON WHAT IT MEANS TO BE STARTING ON THE FRONT ROW:
“Oh sorry, yeah, it doesn’t mean anything (laughs). It doesn’t mean nothing. I wanted the pole, didn’t get it."

IT SOUNDED LIKE IF YOU DO GET A POLE YOU MIGHT LOBBY FOR A SPOT IN THE CLASH NEXT YEAR?
“Yeah, I’ve got a ‘get in the Clash free card’ from this year. I got a credit and if I get a pole I will talk to Rick (Hendrick) and see if we can’t line something up."

YOU ARE ALREADY THINKING ABOUT THAT?
“(Laughs) Well, the Clash isn’t really an official race. It would be fun to talk about it."