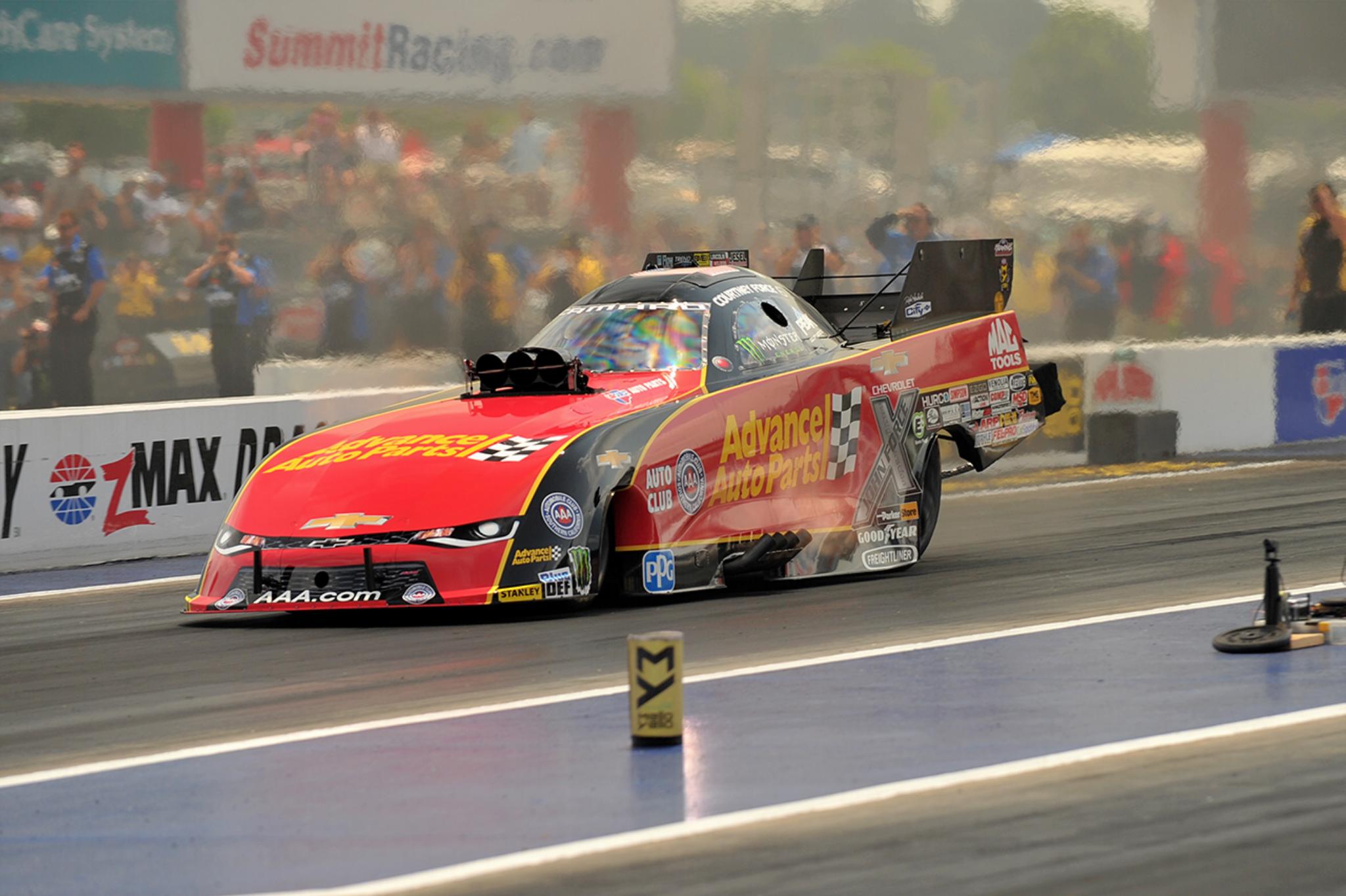 [adinserter name="GOOGLE AD"] Force's low ET of 3.851 seconds was enough to break the track record of 3.876 set by Tommy Johnson, Jr. last September. The pole-winner effort was the 13th of her career and knocked her father and team owner, 16-time Funny Car World Champion John Force, from the top spot.

The last time the John Force Racing team swept the top three qualifying spots – at Topeka in 2014 – it was Courtney Force who hoisted the Wally.

"I'm really excited we've been able to keep that No. 1 spot and really proud of my team," said Force, who take on Jonnie Lindberg in the opening round on Sunday. "I think it's awesome that our Chevy Camaro is flying down the race track. I'm really proud of my guys and for this entire Advance Auto Parts team. It's a really cool feeling to be in the top spot, but obviously our goal tomorrow is going rounds and picking up those points."

Clay Millican led Top Fuel qualifying with a quick time of 3.716 seconds at 325.77 mph set during Friday's second session that no one was able to come close to on Saturday. It was the second no. qualifier of the season for Millican and seventh of his career.

Millican, who is still searching for his first-career Top Fuel victory, is confident his young team led by veteran NHRA driver David Grubnic will make it through the three rounds on Sunday.

"I know every time we show up at the race track we can win," Millican said. "With this car and this team, every time we go I think we can win the race. I like my odds tomorrow. It's a three-round race and won a lot of three round races; I just haven't won a fourth. I'm looking forward to it."

Terry Haddock took the bump spot and will face Millican in the opening round of eliminations on Sunday. Smax Smith and Luigi Novelli failed to make the show.

Jeg Coughlin stood on his time from Friday's session to take the top spot in Pro Stock qualifying. Coughlin covered the 1000-foot distance in 6.578 seconds at 210.24 mph, good enough to notch his 22nd-career no. 1 qualifier and second of the season.

"A Four-Wide win is vacant in my resume," said Coughlin. "My mom has started a scrapbook in the early 70's that has clippings of my father racing four-wide at Dragway 42 (West Salem, Ohio) back in the mid-60's, so it would be very prestigious to add our name to that list of winners here."

John Gaydosh was the 16th-qualifier and will draw Coughlin in the first round.

In Pro Stock Motor Cycle, Friday's top qualifier Jerry Savoie held onto the top spot, falling back on his 6.824 at 196.24 mph to pick up his second-straight no. 1 qualifying spot of the season and 10th of his career, besting four-time Four-Wide Nationals runner-up Eddie Krawiec's pass of 6.835, 196.93.

The defending PSM World Champion failed to advance out of the quarter finals in the first event of the season at Gainesville, and hopes his luck improves with his first zMax final round appearance.

"It would be great to win here," said Savoie, who will face Steve Johnson in Sunday's first round. "For a couple of years, I was pretty bad-ass at (The Strip at) Las Vegas, and I said ‘Am I ever going to win one at Las Vegas?' and last year we did it. But Charlotte and Vegas? You win both of those – it's a good deal. Especially the Four-Wide. The only other milestone I wish I could do would be (win) Gainesville (Gatornationals), because I'm an alligator farmer."

Sunday's opening round of eliminations is set to begin at 12pm.