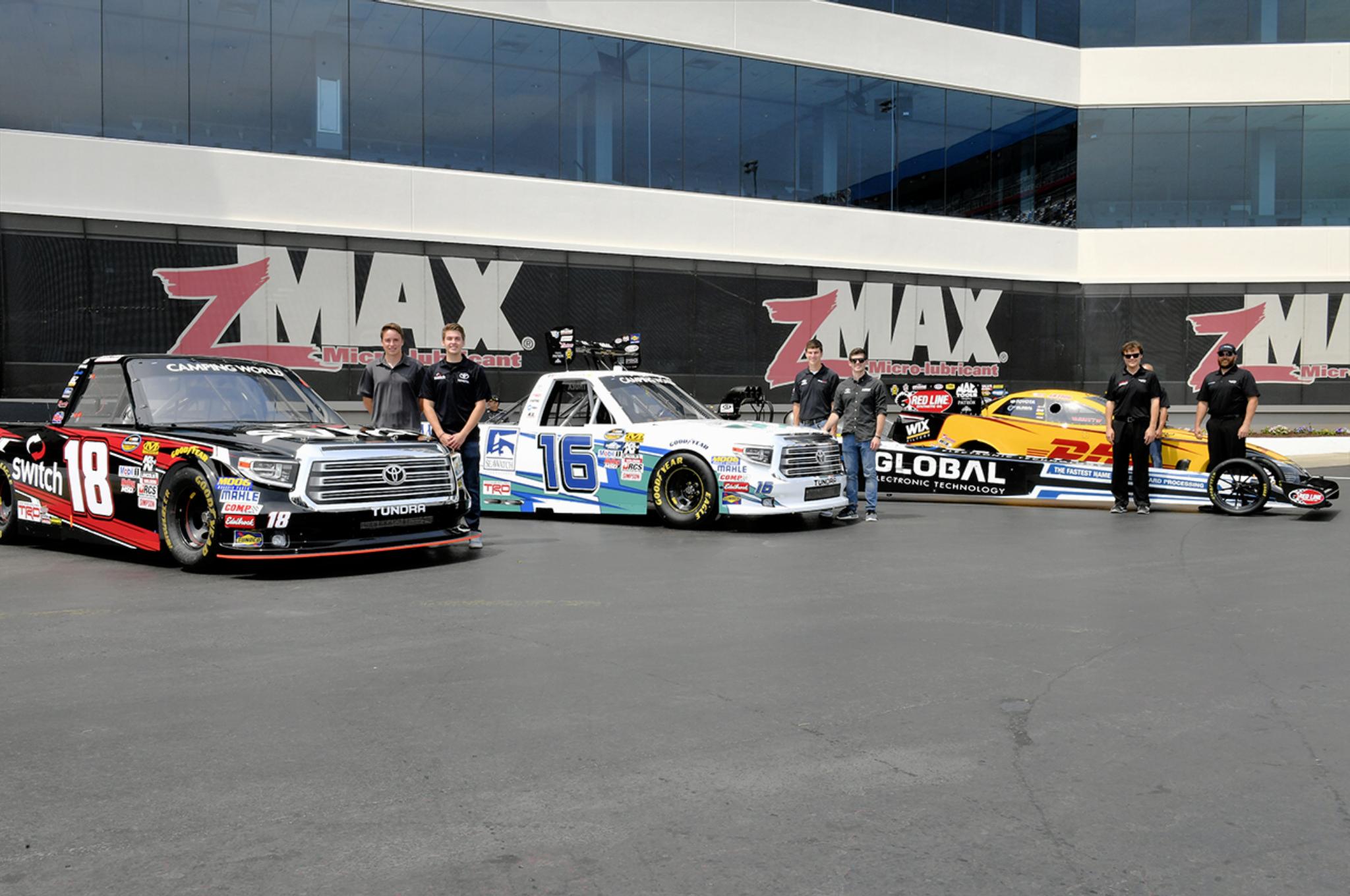 It was straight-line meets circle-track Thursday morning at Charlotte Motor Speedway and zMax Dragway in Concord, N.C., as the star drivers of the NASCAR Camping World Truck Series got the chance to swap seats with some of the ace pilots from the NHRA Mello Yello Drag Racing Series and get themselves a taste of nitromethane.

First up was some hot laps at Charlotte Motor Speedway in a pair of Toyota Camry Hybrid pace cars, with the NHRA drivers riding shotgun as the NASCAR boys took them around at the thrilling speed of 90 miles an hour.

After a few laps of "orientation", the NHRA drivers took over the driver's seat and tried their best "Ricky Bobby" impressions looking to frighten their NASCAR counterparts by moving right up against the outside wall.

Todd turned in some impressive lap times for a driver who doesn't normally make turns on the racetrack.

Langdon had tried to give the crowd a smoky burnout as he left the pits, but the Camry Hybrid wasn't up to the task.

"I'd like to drive what they got," Langdon said of the four NASCAR drivers. "Just holding (the throttle) down and see what it does. If it's something that races competitively on four wheels, I'm in – doesn't matter to me."

After turning a few laps, the action shifted to zMax Dragway as Langdon and Todd showed off their rides to the four NASCAR drivers – none of whom had ever been to an NHRA event before. They were in for quite an introduction.

After a brief orientation on the cockpit layout, Langdon helped Gragson strap into the cockpit of his Top Fuel machine to bring the 10,000 horses to life. Langdon's crew fired up the engine, and the look on Gragson's face said it all.

"That was AWESOME," said Gragson. "I can't imagine driving one of these things. These guys have some guts. That is all.

"My heart is pumping hard right now and we weren't even doing anything – we were just idling. These (NHRA) guys are crazy. This stuff did not make sense to me until I just sat in there about two minutes ago."

The entourage rolled on a few pit stalls down to J.R. Todd's Kalitta Motorsports Funny Car team, where the NASCAR drivers got a look at the slightly roomier cockpit of the DHL-sponsored machine.

Christopher Bell was the first to climb into the driver's seat as they cranked up the car, only this time Todd's crew cracked the throttle open just enough to cause everyone in attendance to jump back five feet.

"That's so much more power" than the truck series," said Bell. "It's some crazy horsepower".

Truex took his turn in Todd's ride and was equally surprised by the experience.

For the finale, the party moved over to the zMax starting line, where Langdon and Todd performed a burnout for the crowd, much to the delight of the four NASCAR drivers who had no idea what to expect.

Gragson, for one, was caught completely by surprise when the car launched off the starting line.

"I can't be the only that's jumping!" Gragson exclaimed. "I was not expecting that at all. They whacked the throttle, they got the RPM's up probably five or six times already, and it's caught me off guard every time. I was blown away.

"I was not ready for that," said Truex. "I didn't expect it to take off like that, so I wasn't prepared for that."

"They're ready for NHRA," said Todd of the four NASCAR drivers. "They got the experience of the warm up and hitting the throttle – we don't even get to do that. I was jealous. I'm never surprised to see people jump we crack the throttle. Anytime it's someone's first time, they're gonna jump to matter what. I enjoy seeing that – it's a good selling point for (NHRA)"