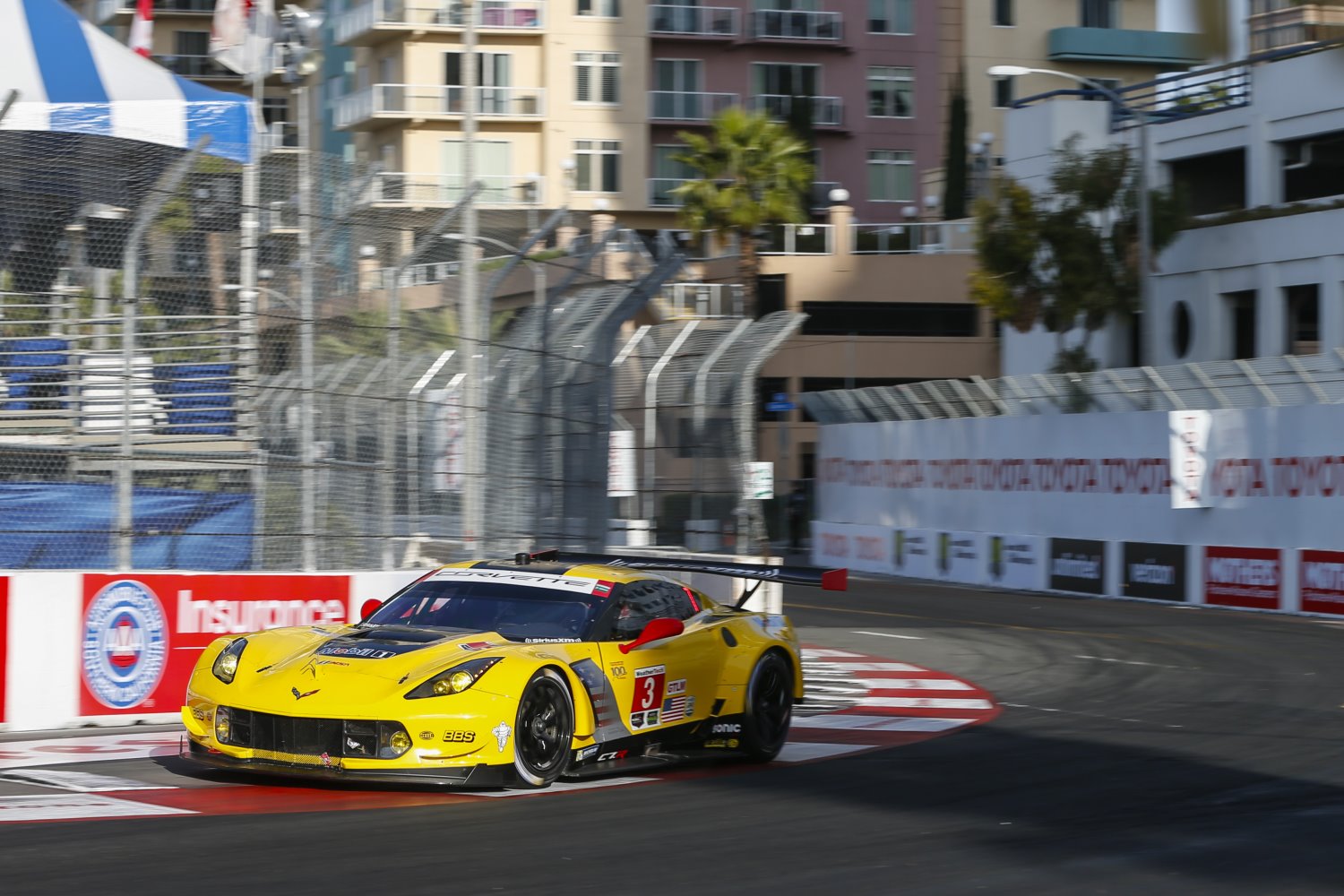 Instead, he and his No. 3 Corvette Racing Chevrolet Corvette C7.R co-driver, Jan Magnussen, wound up fifth and now trail No. 66 Ford GT co-drivers Dirk Mueller and Joey Hand – who had their own disastrous race in Long Beach – by two points, 91-89, with three of 11 races in the books. So, how’d it happen?

Coming to the checkered flag, Garcia encountered a completely blocked racetrack at the exit of the Turn 11 hairpin. Jens Klingmann in the No. 96 Turner Motorsport BMW, Jeff Segal’s No. 86 Michael Shank Racing Acura and the No. 15 3GT Racing Lexus driven by Robert Alon were stopped near the outside wall at the exit of the turn following an incident.

[adinserter name="GOOGLE AD"]Tom Kimber-Smith in the No. 52 PR1/Mathiasen Motorsports Ligier LM P2 car stopped on course when he encountered the incident, blocking the inside lane, with Joao Barbosa in the No. 5 Mustang Sampling Cadillac DPi and Jeroen Mul in the No. 16 Change Racing Lamborghini stacked up behind him.

Garcia paused momentarily when he arrived on the scene before choosing an outside lane that was blocked by the Nos. 96, 86 and 15 cars, while teammate Tommy Milner hung to the inside in the No. 4 Corvette with Richard Westbrook in the No. 67 Ford GT right behind him.

Moments later, Kimber-Smith pulled away from the scene, followed closely by Barbosa and Mul, and very shortly thereafter, Milner, Westbrook, the No. 912 Porsche of Kevin Estre and the No. 25 BMW of Alexander Sims, who went on to finish the GTLM race in positions 1-4, ahead of Garcia, who wound up fifth.

"I’ve never been part of a finish like that," Garcia said after the race. “It’s for sure very difficult to go through; I’m very confused with how the officials judged both incidents in the last corner. Our No. 3 Corvette team did everything we needed to do in order to have the best chance at another victory. I don’t understand the ending and unfortunately for us the results are what they are. All we can do is put ourselves in position to go for a win the next race in Austin."

IMSA race control determined that what Garcia encountered was an incident in progress, and he became part of the incident. Those cars that made it through the incident scene did not get involved so the results as the cars crossed the finish line stood.

Milner – whose only stint in the lead was from the exit of the hairpin to the finish line – was sympathetic to his teammate after the race. However, he noted a similar experience in the hairpin earlier on cost him a few positions as well.

"In the last corner at the end, my first reaction was that the race was over," Milner said. “Antonio had a gap over me and also over the (No.) 67. I figured it would end up like that but I heard on the radio that there was another crash at the hairpin.

“At first the track was clear and then it wasn’t. I was in that exact situation earlier in the race and went to the outside; it didn’t work and I lost a spot there. I went to the inside this time, and it opened up. When I got out of the hairpin, I saw green but thought the race was over until they told me on the radio that we had won. It was definitely an unusual way to take a victory."

The No. 66 team, meanwhile, wound up eighth in GTLM after an opening-lap incident with the No. 62 Ferrari and the No. 22 Nissan DPi. Hand and Mueller opened the year with a Rolex 24 At Daytona victory and a second-place run in the Mobil 1 Twelve Hours of Sebring Fueled by Fresh From Florida.

DPi BATTLE BEGINNING TO HIT ITS STRIDE: While Jordan and Ricky Taylor picked up their third consecutive WeatherTech Championship victory, giving Cadillac a three-race win streak to begin the Daytona Prototype international (DPi) era, the battle among all cars in the Prototype class was much closer at Long Beach, and particularly among the DPi cars.

Ryan Dalziel, who finished second in the No. 2 Tequila PatrÃ³n ESM Nissan DPi, claimed the lead through pit strategy and spent several captivating minutes late in the race trading fastest laps with Jordan Taylor. He attributed Taylor’s daring, late-race pass for the victory in Turn 1 to issues with slower traffic.

“To have led so many laps, see how strong we were, and just get ruined by lapped cars driving like morons is frustrating," Dalziel said. “We did everything we could do. The car was excellent and strategy was perfect. I feel bummed, but we will take second."

It was the best DPi result to date for the new Nissan program. And Mazda Motorsports picked up its first WeatherTech Championship podium result of the season with a third-place run by Tristan Nunez and Jonathan Bomarito in the No. 55 Mazda DPi. Nunez took second at the start of the race around Christian Fittipaldi in the No. 5 Cadillac DPi, and Tom Long made his way to third in the No. 70 Mazda DPi at the 33-minute mark when Fittipaldi pitted. Long and co-driver Joel Miller finished sixth in class after pit-stop issues.

“It was a decent Mazda day here in Long Beach," said Mazda Motorsports Director John Doonan after the race. “Both cars showed solid pace throughout the race…and if you are going to stand somewhere at the end of the race, you certainly want it to be on the podium. I want to thank every one of the team members and all of our partners for their efforts and support.

“It has been a thrash getting up to speed and getting the 2017 program off the ground. Now, getting a taste of what it feels like to have the leaders in our sights is nice, but we are far from satisfied."

It was the first time three different OEMs were represented on a WeatherTech Championship podium since Circuit of The Americas in 2014. The series heads to COTA for its next event, the Advance Auto Parts Sports Car Showdown, on Saturday, May 6.

QUICK START FOR MERCEDES-AMG: With a pole position, back-to-back victories and a 1-2 sweep, Mercedes-AMG looks like anything but a first-year program in the IMSA WeatherTech SportsCar Championship.

Short of a victory in the season-opening Rolex 24 At Daytona, it’s been a nearly perfect debut for the German manufacturer. In last month’s Mobil 1 Twelve Hours of Sebring Fueled by Fresh From Florida, Tristan Vautier delivered the first GT Daytona (GTD) pole for the manufacturer in the No. 75 SunEnergy1 Racing Mercedes-AMG GT3. The next day, Ben Keating, Jeroen Bleekemolen and Mario Farnbacher scored its first victory in the No. 33 Riley Motorsports-Team AMG entry.

In the BUBBA burger Sports Car Grand Prix at Long Beach last Saturday, the No. 50 WeatherTech Racing team of Cooper MacNeil and Gunnar Jeannette played their race strategy to perfection, bringing home their first victory in the series ahead of Bleekemolen and Keating. As a result, Keating, Bleekemolen and the No. 33 team have a healthy, 21-point lead in the GTD driver and team standings over defending champions Christina Nielsen and Alessandro Balzan in the No. 63 Scuderia Corsa Ferrari 488.

Mercedes-AMG, meanwhile, sits atop the GTD manufacturer point standings with 100 points, nine more than second-place Porsche. Pretty impressive for a first-year manufacturer, and especially in a class that includes nine different OEMs.

“The performance of all of our Mercedes-AMG Motorsport Customer Racing teams in the IMSA WeatherTech SportsCar Championship so far this season has been amazing," said Tobias Moers, chairman of the board of management for Mercedes-AMG. “To be leading the championship is a great endorsement of our engagement in this extremely popular GT racing series. The IMSA WeatherTech SportsCar Championship is the perfect stage to expose the performance of our Mercedes-AMG GT3 in close collaboration with our professional customer teams and drivers. We are looking forward to the rest of the IMSA season."

TOUGH RUN AT LONG BEACH FOR PAUL MILLER RACING LAMBORGHINI FOLLOWING STRONG START: Qualifying on the pole position on a tight street circuit like Long Beach oftentimes leads to good results, as evidenced by Ricky and Jordan Taylor’s Prototype class victory in the No. 10 Konica Minolta Cadillac DPi and a would-be victory for the No. 3 Corvette started on the GTLM pole by Jan Magnussen and finished by Antonio Garcia.

Unfortunately for Sellers and the team, the pit stop he made to turn the car over to co-driver Madison Snow came during a “short yellow" in which the pits are closed to all competitors. As a result of the infraction, Snow was forced to bring the No. 48 back onto pit lane for a stop-and-go penalty under green-flag conditions.

The penalty dropped the No. 48 well down the GTD order. Snow and Sellers wound up 16th in class.

“Unfortunately, it was not the day we were looking for," Sellers said. “Sometimes it goes your way, and sometimes it doesn't. Today was not our day. That's all we can do. We had a great effort, and it is true to say you win and lose as a team.

“We have to go back and look at what happened and make sure it doesn't happen again. I think we also have to look at the positives. We had a good car, sat on the pole, so it was a good weekend up until it wasn't. We'll look at what we have to do and get better for the next one."

CHESTER’S DAY AT THE RACES: Linkin Park singer Chester Bennington was an honored guest of Mercedes-AMG and IMSA during the BUBBA burger Sports Car Grand Prix at Long Beach. Bennington, who has a promotional relationship with Mercedes-AMG, was the grand marshal of the race, giving a rock-star worthy command to start engines and also served as the race’s honorary starter.

Bennington also got an up-close look at the Long Beach street circuit in a pre-race ride aboard the Mercedes-AMG GT IMSA Hot Lap car. And a few hours after the race, Bennington joined rock legends such as Billy Idol and ZZ Top’s Billy Gibbons as part of an all-star band named “Kings of Chaos," which rocked the Long Beach Convention & Entertainment Center Terrace Plaza at the racetrack in a Saturday evening concert.

FORD PICKS UP FIRST DEKRA GREEN AWARD OF 2017: Prior to last Saturday’s BUBBA burger Sports Car Grand Prix at Long Beach, the No. 62 Risi Competizione Ferrari 488 GTE had dominated the race for the DEKRA Green Award, winning at both the Rolex 24 At Daytona and the Mobil 1 Twelve Hours of Sebring Fueled by Fresh From Florida.

In Long Beach, however, the No. 62 Ferrari was involved in an opening-lap incident, ending its race very shortly after it began. That opened the door for a new winner, which became the No. 67 Ford Chip Ganassi Racing Ford GT, with its twin-turbo V6 EcoBoost engine, co-driven to a runner-up result in the GT Le Mans class by Richard Westbrook and Ryan Briscoe.

The award goes to the most environmentally clean, fast and efficient race car in the GTLM class at each event through protocols established in a partnership between IMSA, the U.S. Department of Energy (DOE), the Environmental Protection Agency (EPA) and the Society of Automotive Engineers (SAE) International.