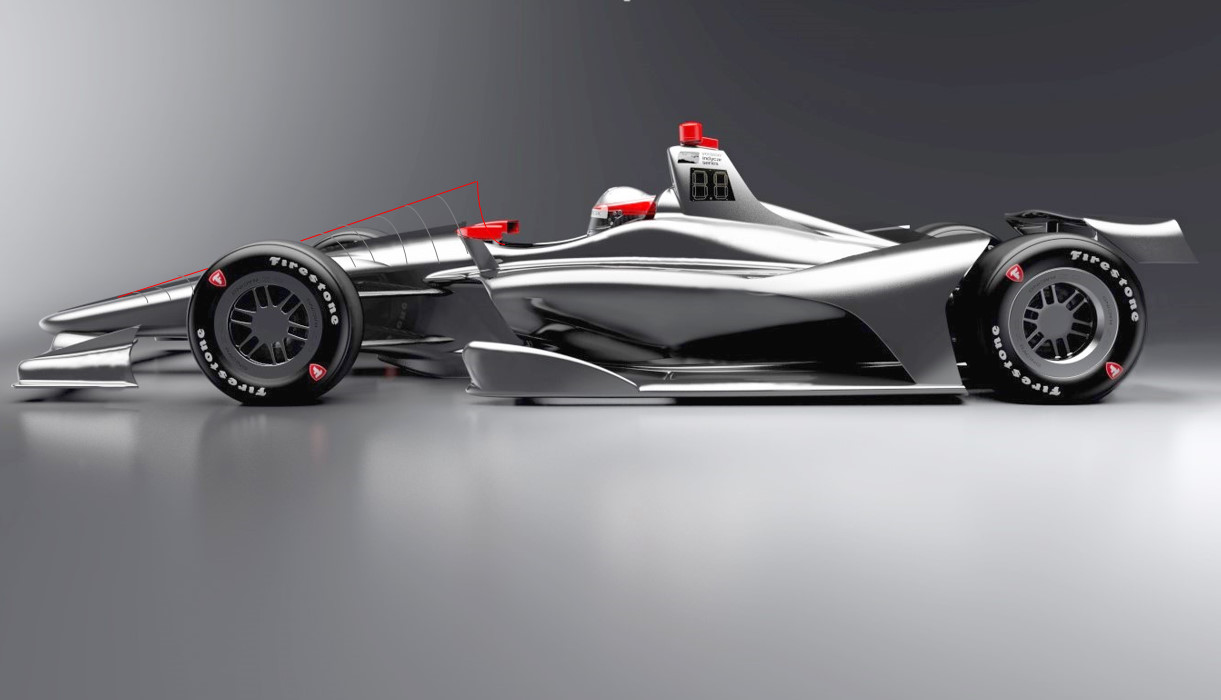 2nd UPDATE: Recall below that we questioned why the new aeroscreen was not included in the new renderings as that could make the car look hideous again.

IndyCar Director of Engineering Jeff Horton told AutoWeek's Bruce Martin, "the series has been working on this project in hopes of having additional driver head protection.

"(Chassis manufacturer) Dallara is helping us with the design and fitting it to the car and it's considered part of the 2018 universal aero kit," Horton told Autoweek.com. "It looks like a wind screen from the past. We are not going with canopies because there are too many problems with our cars because of that. It will have more of a windscreen look that should improve protection. It will go above the top of the driver's helmet but not enclose the driver (like a motorcycle windscreen). It's considered part of the 2018 aero kit."

The windscreen would improve aerodynamics by making the Dallara chassis sleeker, so additional drag may be added to the design to keep speeds from soaring higher than the series wants.

"PPG Aerospace is our partner on this and do all the canopies for the F-16 fighters," Horton said. "They have a pretty good handle on materials. Right now, it looks pretty promising. The material will be substantially strong."

"It's our understanding that IndyCar will have some type of windscreen on next year's aero kit from what we have been told by the series," Team Penske engineer David Faustino told Autoweek. "I don't know much beyond that other than they are evaluating and testing what the best type will be for our cars and will be tested with the universal aero kit this summer."

UPDATE: IndyCar released the following two renderings today that give a clearer image as to what the new car will look like. Both are the SuperSpeedway version with the small, low, rear wing. As we understand it these still are not the final way the car will look as they are one generation behind where the committee is.

Note there is no hint of a windscreen to protect the drivers head, as has been discussed. However, if you look at the bodywork in front of the cockpit opening, and compare it to the current car, it appears the slope changes slightly halfway up the nose and the bodywork is higher at the leading edge of the cockpit opening (i.e. in front of the dash), which if true, would afford the driver slightly more protection.

IndyCar told AR1.com "The images we've released are not to be taken literally. They are steps in the process and subject to change.

"They're still working on cockpit protection. If and when something is ready it will be included. Remember, these are renderings, not a final product."

Note also that in the top view there is still a hole in the floor/undertray of the car for the Superspeedway version. That hole will be closed off in the road, street circuit and short oval version of the bodykit.

INDIANAPOLIS – The design of the car to be used in Verizon IndyCar Series competition in 2018 is coming more into focus.

INDYCAR, sanctioning body for the premier North American open-wheel racing series, released new images today of the universal aerodynamic bodywork kit that will be used by all competitors in 2018. Following along with this year's INDYCAR theme of "NEXT," the computer-generated images are the next evolution of the car's development process and provide more detail than concept sketches released in January.

"While this remains a work in progress, we are encouraged with where the development of the 2018 car stands," said Jay Frye, INDYCAR president of competition and operations. "The look of the car is bold, the performance data from simulations is meeting targeted goals and safety enhancements built into the design will be substantial."

Frye said INDYCAR is on target to begin testing the car by mid-summer. Verizon IndyCar Series teams will still choose between Chevrolet and Honda engines for competition next season, but all cars will be outfitted with the universal kit that covers the Dallara IR-12 chassis that has been used since the 2012 season. As with the current aero kits provided by Chevrolet and Honda through the end of this season, the universal car will come in two configurations: one for superspeedway ovals and the other for street courses, road courses and short ovals.

The supplier of the universal kit has yet to be announced, but its look is sleek and reminiscent of past Indy car favorites. Tino Belli, INDYCAR director of aerodynamic development, said the kit has been successfully reverse-designed to start with its desired appearance and build in functionality from there.

"We've been working on the aerodynamics to suit the look, rather than the other way around," Belli said.

[adinserter name="GOOGLE AD"]A key component of the new car is for it to generate most of its downforce from underneath instead of on top. This will improve racing and passing opportunities by decreasing the turbulent air that the Indy car leaves in its wake.

"We're working on creating more of the downforce from the underwing," Belli said. "The hole in the floor (of the undertray on this year's car) will be sealed for the road courses and short ovals, but will still be open for the superspeedways."

Belli added that simulations show the new car meets INDYCAR's aerodynamic targets and additional safety enhancements include side impact structures in the sidepods and repositioned radiators to assist in reducing the severity of side impacts by crushing on impact.

Other noticeable features in the new car images include a lower engine cover that provides "a more traditional Indy car look," according to Belli. Turbocharger inlets are moving to the inside of the radiator inlet ducts.

The rear wing and front wing main plane are smaller in the new car look and the centerline wicker from the nose of the car to the cockpit is tapered. The rear wing in the road course/short oval configuration is lower and wider. The fins on the leading edge of the sidepods of the current car will be removed or minimized on the 2018 car.

Though there is still work to be done, Belli feels that INDYCAR has achieved "97 percent" of its goals when it set out to create the new car's look and efficiency.