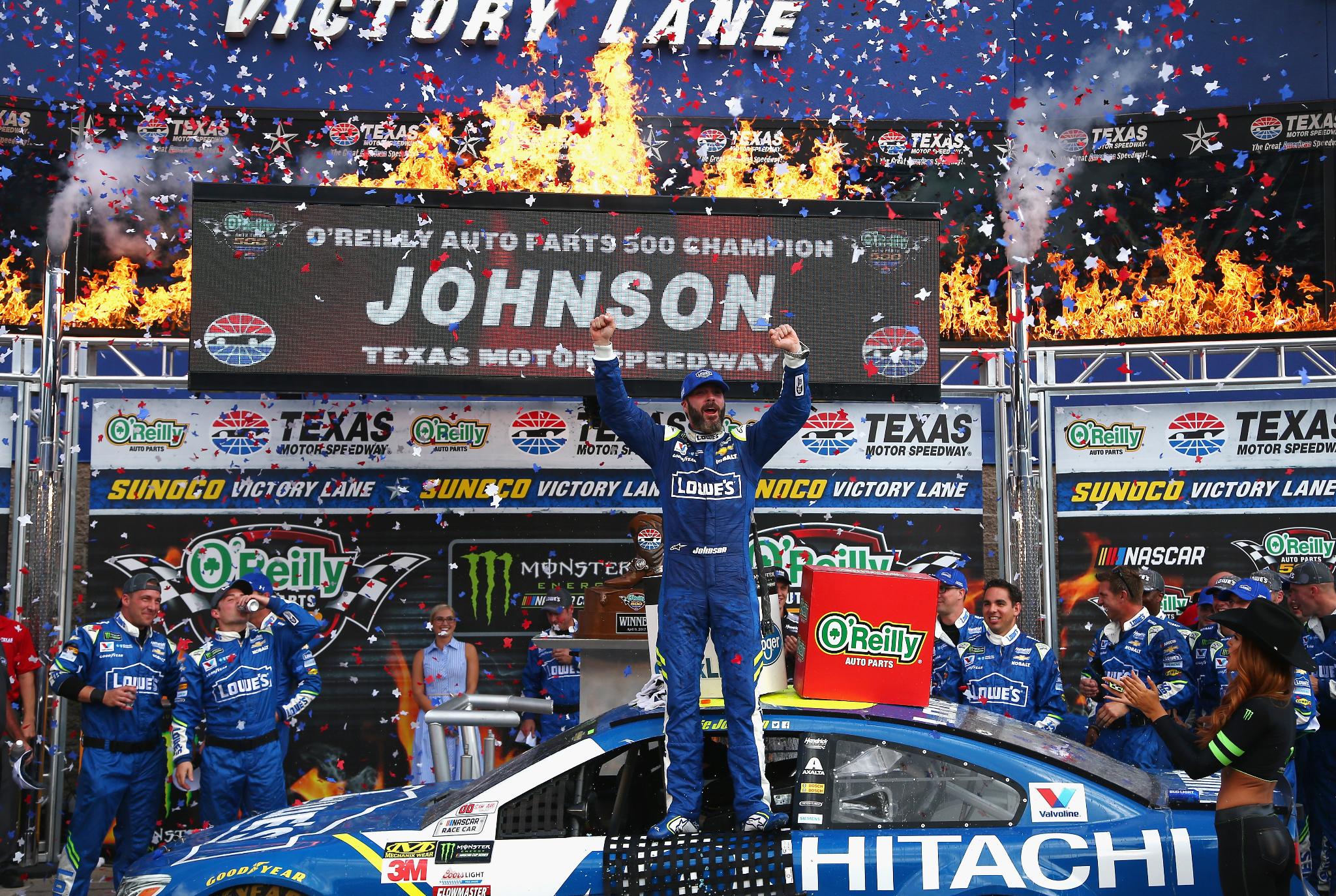 Jimmie Johnson proved on Sunday that you can't keep a good driver, a good car and a good team down for long-even if you change the playing field at one of his favorite race tracks.

The seven-time Monster Energy NASCAR Cup Series champion passed Joey Logano for the lead on Lap 318 of 334 and pulled away for his first victory of the season in the O'Reilly Auto Parts 500 at newly repaved and reconfigured Texas Motor Speedway.

The win was Johnson's seventh at the 1.5-mile track and the 81st of his career, and it came despite an inauspicious start to the weekend. Johnson spun in the first round of Friday's knockout qualifying and flat-spotted his tires. Because his team changed tires on the No. 48 Hendrick Motorsports Chevrolet before the race-contravening NASCAR's mandate that drivers start the race on their qualifying tires-Johnson dropped to the rear for the initial green.

By the time NASCAR called the fifth caution of the race on Lap 121 for debris on the frontstretch, Johnson had cracked the top-10, and he was fourth out of the pits for the subsequent restart on Lap 127.

At the end of Stage 2, which concluded on Lap 170, the No. 48 Chevy was second behind Ryan Blaney, who swept the first and second stages but finished 12th overall after sliding through his pit box on the final stop on Lap 300 and losing track position.

Blaney led 148 laps. Johnson led 18, but he led the one that counted most. The victory was Johnson's sixth in the last 10 races at Texas.

"I guess I remembered how to drive, and I guess this team remembered how to do it!" said Johnson, who has been the victim of some inevitable second-guessing after scratching out a lone top-10 (ninth at Phoenix) in the first six races of the season. "I'm just real proud of this team.

"What a tough track and tough conditions. We were really in our wheelhouse and we were just able to execute all day."

The only thing that bothered Johnson was a lack of hydration in the car, thanks to a malfunction in the fluid delivery system, but with a break in the schedule for Easter, he'll have nearly a fortnight to recover before the Monster Energy NASCAR Cup Series goes to Bristol Motor Speedway.

"Oh, it was hot in there," Johnson acknowledged. "I got cooked in the car today. I didn't have any fluids, so I'm not feeling the best, but we got into Victory Lane. I'm so proud of the fight in this race team. I can't wait to celebrate during this off-weekend with my family and friends and really enjoy this."

Johnson paid a visit to the infield care center after climbing from his car, before coming to the media center for his post-race press conference.

Kyle Larson finished second for the fourth time this season. A winner at Fontana, Calif., in late March, Larson also started 32nd because his car didn't pass pre-qualifying inspection in time to make an attempt during time trials. After working his way toward the front, Larson was sent to the rear again for driving through too many pit boxes under a competition caution on Lap 33. But he again found his way to the front. It simply took him too long to get past Logano during the final 30-lap green-flag run.

"Wish I would have got him by a little sooner, but all in all a great day for our Credit One Bank Chevy team," Larson said. "I made a mistake there on the first pit stop and clipped too many boxes. I turned in way early.

"I was disappointed in myself then, because I feel like our car was really, really good the beginning part of the race and probably could have drove up to the lead and maybe controlled the race from then on. So you never know.

"But I just got to focus a little bit harder and not make mistakes, and we can control some races, lead some laps. All in all, still a really good finish for us and we extend the point lead a little bit (to 17 points over ninth-place finisher Chase Elliott), so a solid day."

The racing groove on the repaved surface began to widen out as the race progressed, thanks in part to the track's effort to drag tires and lay down rubber throughout the weekend.

"Yeah, the track was a little bit better than I think I expected it to be," Larson said. "I thought it would be a little bit harder pass. Maybe it was, but our car was really good, so it could operate on the bottom of (Turns) 1 and 2 really good, and that was about the only place you could pass was the exit of 2, so our car was thankfully working good over there."

On a contrarian pit strategy that dictated he stay out in the lead for the final restart, Logano held third. Polesitter Kevin Harvick came home fourth after leading 77 laps. Dale Earnhardt Jr. ran fifth, far and away his best result of the season, after starting 37th because of the same pre-qualifying inspection issue that buffaloed Larson.