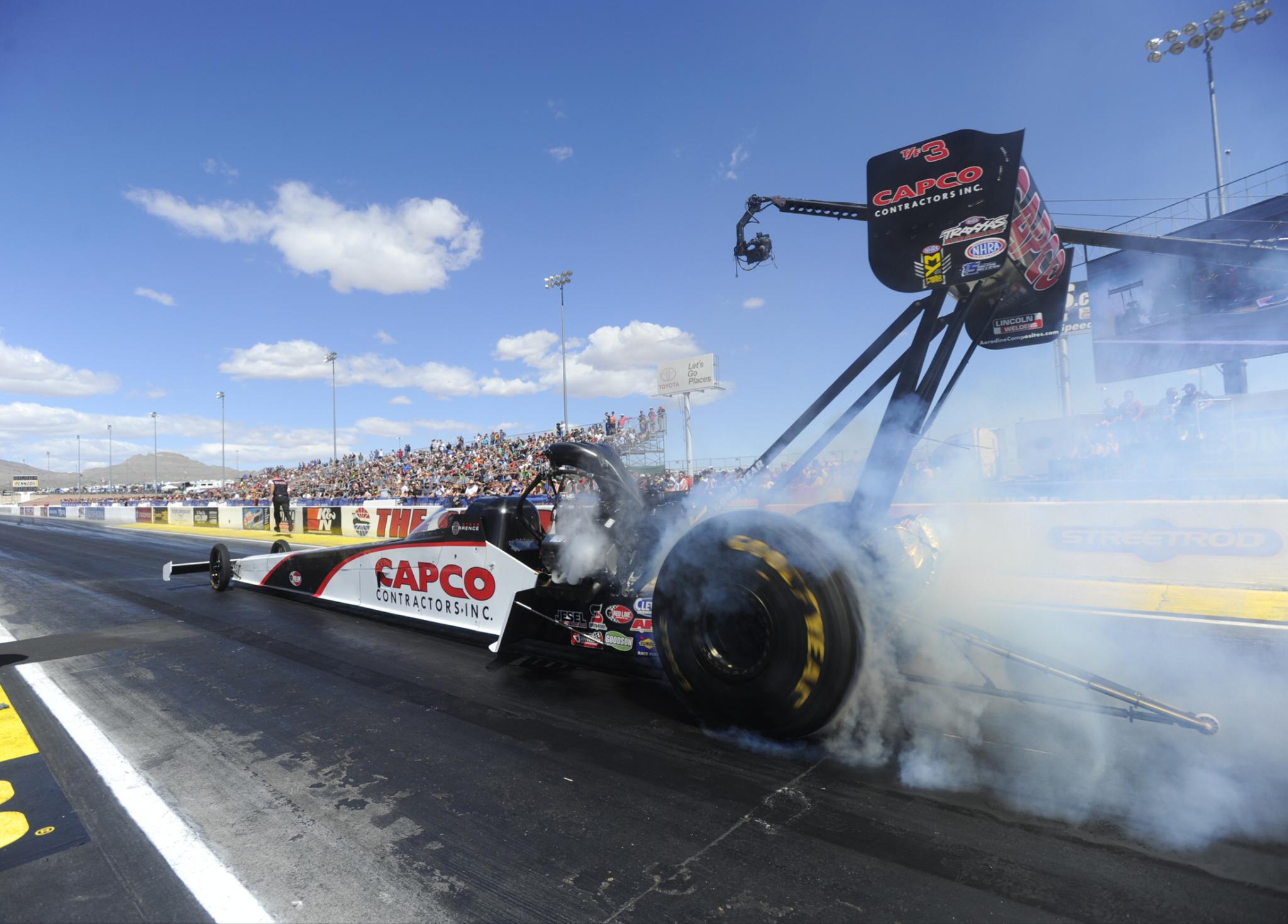 Torrence held on to the top spot with his 3.720 run at 327.03 in his Capco Contractors dragster from Friday. This is the 14th No. 1 qualifier of his career and first of the season.

"We seem to have a good handle on the conditions here in Las Vegas," Torrence said. "When we come here, we typically run well right out of the trailer. We usually run well on Q1 and then we build on that. And that's huge for going rounds on Sunday but even just even doing well in qualifying for having a good base and a good platform to tune off of."

Eight-time world champ Tony Schumacher and his U.S. Army dragster are in the No. 2 spot and will face Terry Haddock in the first round of eliminations. Brittany Force is third in her Monster Energy dragster.

Courtney Force holds The Strip at Las Vegas Motor Speedway's elapsed time track record in Funny Car with her No. 1 qualifying pass of 3.867 at 327.66 in the Advanced Auto Parts Chevy Camaro.

"This is an awesome run for our team," Force said. "To head down there and run a 3.86 to set the track record. That definitely felt good. It was a great run for us. We're excited about it. It all comes down to tomorrow, though. Our main goal is going rounds tomorrow and heading to the winner's circle in Vegas."

This was the 11th No. 1 qualifier of Force's career. She will face Gary Densham in the first round of eliminations. Matt Hagan is qualified in the second position and will line up against 2015 Funny Car champ Del Worsham. Tim Wilkerson is in the third spot.

Line maintained his No. 1 qualifier status with his 6.647 pass at 206.29 in his Summit Racing Equipment Chevy Camaro from the weekend's first qualifying session on Friday.

"The strategy is to go out there and go as fast as you can every time," Line said. "Obviously try to do the best job you can to get every bit of performance out of the race car. It's not just me. I'm just one small part of it. I'm the guy who can mess it up. [Crew chief] Rob [Downing] and the guys do a really good job of getting the race car down the racetrack. It's a very good hot rod right now."

This is Line's 53rd No. 1 qualifier of his career. Veteran Jeg Coughlin is qualified second in his JEGs.com / Elite Performance Chevy Camaro and will race Tom Huggins.

Eliminations for the DENSO Spark Plugs NHRA Nationals will begin at noon on Sunday. Watch the action live on FOX Sports 1 at 6 p.m. ET.