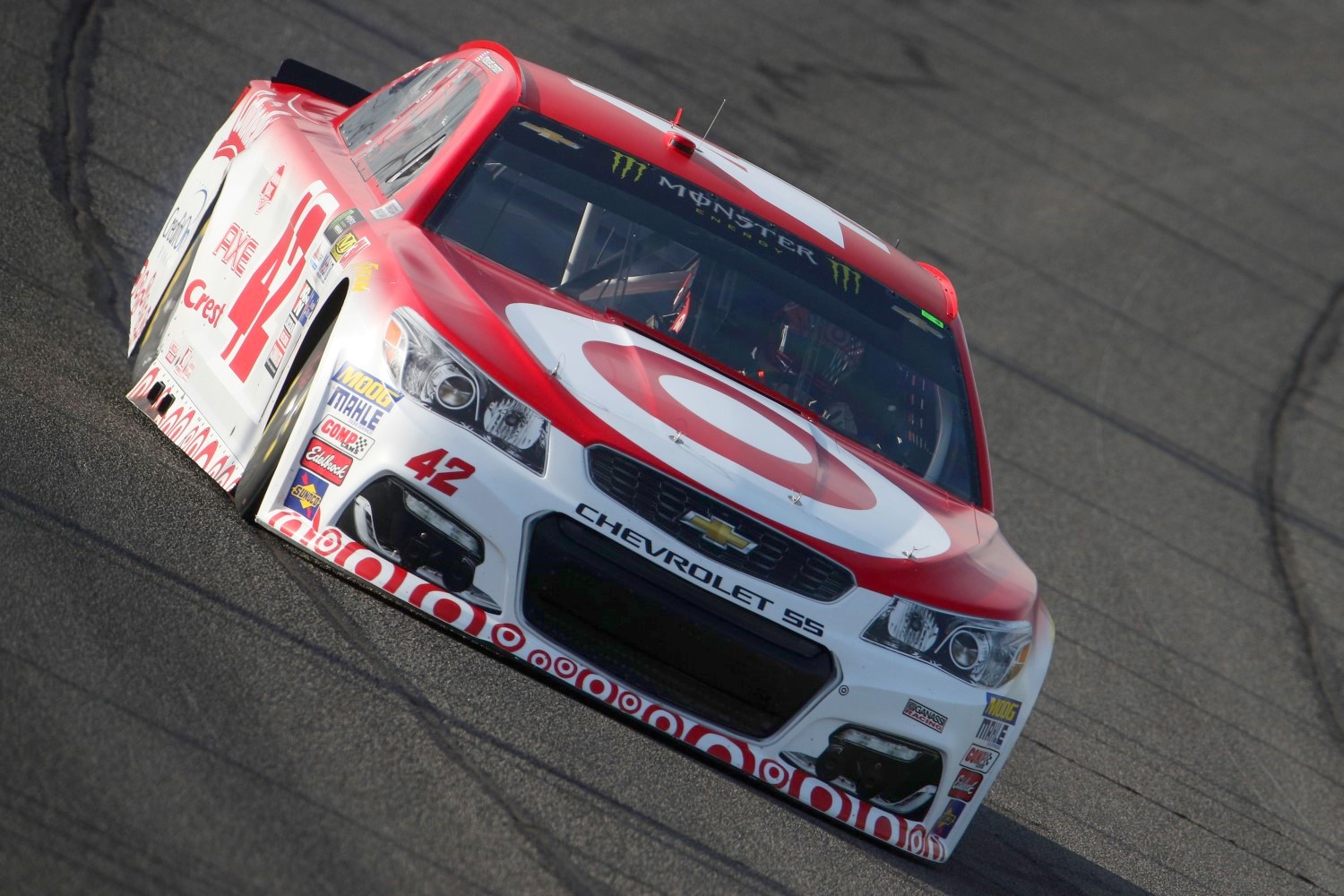 Target Chip Ganassi driver Kyle Larson had a weekend he won't soon forget. Racing in front of his home crowd, he won the NASCAR Xfinity race on Saturday and Sunday led a race high 110 laps to finally get his first Monster Cup win of 2017 going away.

Surviving several late cautions and restarts, Larson's Chevy simply could not be touched and after three runnerup finishes Larson is the latest open wheel star to come to NASCAR and do well.

Larson, who started on the pole and led a race-high 110 laps, took the lead on the final restart with two laps remaining in the overtime 202-lap race, vaulting past other contenders for his second career victory.

Brad Keselowski finished second in the No. 2 Team Penske Ford, overcoming damage to his car suffered just after the green flag dropped.

Rounding out the top five were Clint Bowyer in the No. 14 Stewart-Haas Racing Ford, Martin Truex Jr. in the No. 78 Furniture Row Racing Toyota and Joey Logano in the No. 22 Team Penske Ford, respectively.

Larson won Stage 1, leading 43 of the first 60 laps; Truex led all but five laps of Stage 2, finishing first when the stage ended.

[adinserter name="GOOGLE AD"]The race started with contact immediately after the green flag that affected a handful of cars from the start when Denny Hamlin's No. 11 Toyota was slow to get moving from the No. 2 position.

That caused a backup in his inside lane that resulted in Brad Keselowski's No. 2 Team Penske Ford being hit from behind by Ryan Newman's No. 31 Richard Childress Racing Chevrolet, and Kevin Harvick's No. 4 Stewart-Haas Racing Ford sustaining damage on the front bumper and grille.

"I was staying as calm as I could be, but also frustrated at the same time. It seems like every time I get to the lead at the end of one of these things, the caution comes out and I've got to fight people off on restarts. Our Target Chevy was amazing all day. We were able to lead a lot of laps today. (Martin) Truex was better than us that second stage by quite a bit. We were able to get the jump on him the following restart and led pretty much the rest of the distance. I had to fight them off there after the green flag stops and that was a lot of fun. I can't thank Target enough, Credit One Bank, all of our partners, Chip Ganassi, Rob Kauffman, Felix Sabates, I hope you are feeling better at home, wish you were here. This is just amazing. We have been so good all year long; three seconds in a row. I've been watching all the TV like ‘he doesn't know how to win', but we knew how to win today, so that was good."

DO YOU FEEL LIKE THE PRESSURE IS OFF? â€¨"Yeah, no doubt. I made a mistake early in the race and lost a lot of track position sliding through my (pit) box, but they had awesome pit stops all day long. Great pit stops there at the end especially and our restarts were good. I spun my tires a couple of them and had to drag race Denny (Hamlin) and Kyle (Busch) into Turn 1, but we had a good last restart, got some clean air and came on to the win. Like I said, I can't thank everybody up here enough and everybody at the shop too. They have been working their tails off all off-season and it's carried over into this year. It's spectacular all the hard work is paying off."

WHAT WAS IT THAT PROPELLED YOU ALL THE WAY AROUND DENNY (HAMLIN) AND EVERYBODY ELSE?
"We had a few lap fresher tires than them and I knew that was going to be very important to get to the lead quick. I was hoping we weren't going to have a caution like we had. We were just able to have a good restart there on the last one and get a really good push by Truex on that launch. I got a little nervous that he might peel underneath me or try and get above me, but we were able to carry enough momentum around to hold onto the lead and ultimately get the win. Can't say enough about everybody on this Target team, Credit One Bank. The crew is amazing, our pit crew has been spectacular this year and we have had a lot of speed in our race cars. It is a lot of fun to come to the race track right now."

TAKE US THROUGH THE LAST PIT STOP:
"I knew my pit crew was really good, so I actually ran a little bit slower down pit road by one light just to be safe. I didn't want to speed, I didn't want to do anything stupid and we were able to get the jump there off pit road and line up on the outside, which was awesome."

WHAT HAPPENED IN STAGE 2 AND WHAT MADE THE DIFFERENCE IN STAGE 3?
"Well, I had slide through my (pit) box at the end of that first stage and I had to overdrive some to get to second and then Truex was just really good that run and I had run the top of (Turns) 3 and 4 and probably wore my tires out too much. When I got to the lead in the third stage I knew to just commit to the bottom of (Turns) 3 and 4 and save my tires the best I could. Our long run was really good the rest of the race."