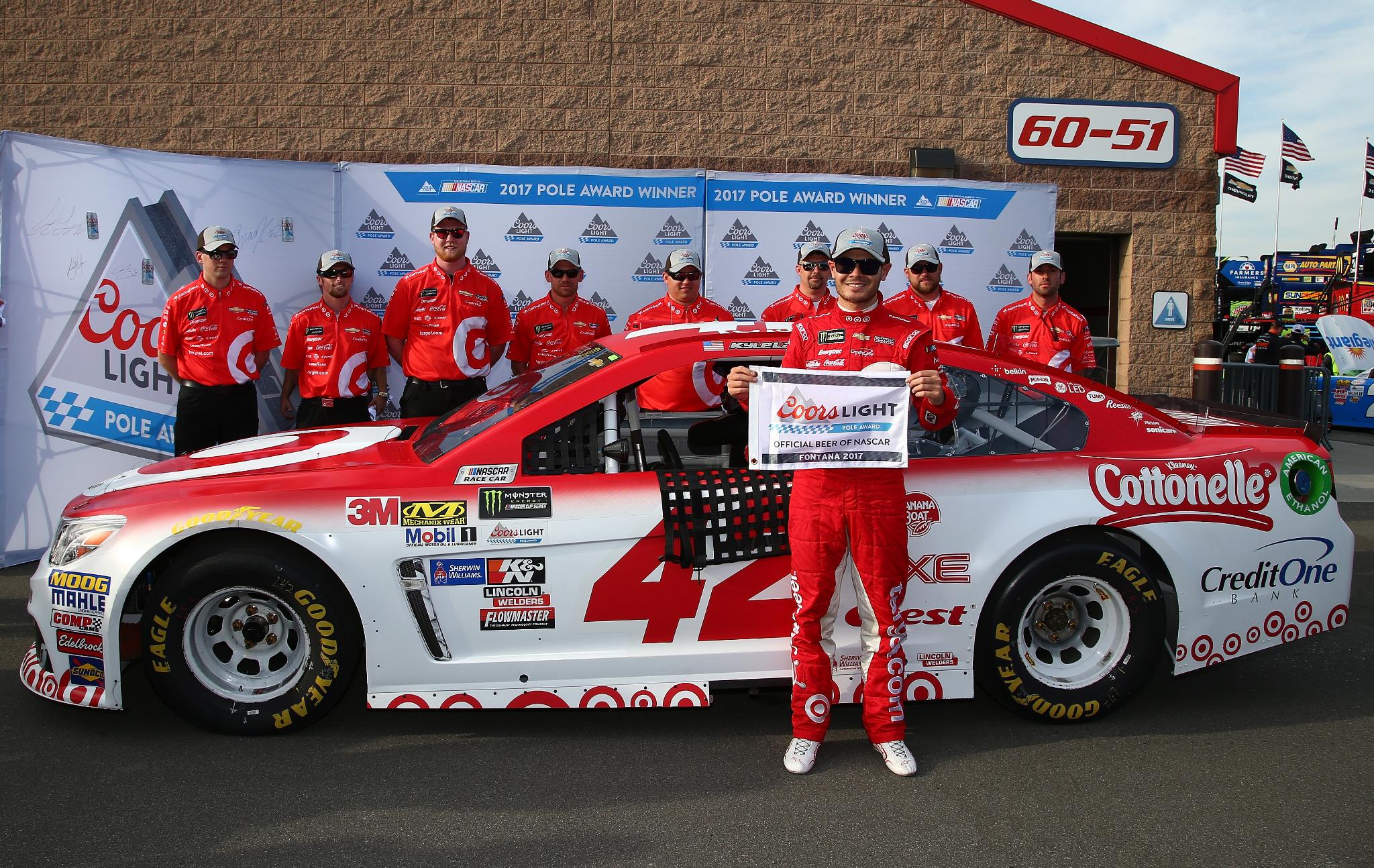 The driver who has finished second in the last three Monster Energy NASCAR Cup Series races will start first on Sunday.

Moving up the track for his final run, series points leader Kyle Larson navigated rough, bumpy Auto Club (Fontana, California) Speedway in 38.493 seconds (187.047 mph) on Friday to win the pole for Sunday's Auto Club 400, the fifth race of the season.

The 24-year-old Larson edged Denny Hamlin by 0.014 seconds, as Hamlin covered the two-mile distance at 186.979 mph. The Coors Light Pole Award was Larson's first at Auto Club, first of the season and second of his career.

"It was an interesting qualifying for us," Larson said. "I ran the bottom in (Turns) 3 and 4… well, all day, really (during opening practice), and then there in the first two rounds. I knew everybody was running the top in 3 and 4, and my plan was to go up there in the second round, but thought I maybe got through (Turns) 1 and 2 okay enough to run the bottom, but I still lost time there.

"I knew the third round I was going to have to move up, but our Target Chevy was really good, really balanced up there. I was surprised. I wasn't really sure what I would have, because on our up-to-speed laps up there I was a little bit tight taking off and then I would be kind of loose off, so I was expecting to have that.

"But it stuck really well, and, yeah, I saw the lap pop up on my dash and I was pretty pumped. Can't say enough about everybody on our Target team. They did an amazing job all day."

[adinserter name="GOOGLE AD"] Hamlin, who holds the track record at Fontana and has won three poles at the two-mile track, thought he lost the top starting spot on corner entry in the third round of the knockout qualifying session.

"I thought it was definitely a lap that would be in contention for it," Hamlin said. "We improved our car just slightly from the previous run, and it looked like our time was slightly faster as well. I thought being the fastest car in round two with the 51 (38.51 seconds) and then improving in the final, I knew it put us very close.

"I didn't get quite through (Turns) 3 and 4 on entry as good as I needed to beat the 42 (Larson), it looked like. All my exits were very good, but my entries were just a little bit slow. I knew that it would be close, but running a 50 (38.507 seconds), I thought we probably would have got beat."

For two entirely different reasons, two of the favorites for Sunday's race didn't make qualifying attempts at all. Jimmie Johnson spun his No. 48 Chevrolet through the infield grass in practice, had to go to a backup car and opted not to make a run in a car that would have been hastily prepared.

"I mean it's no easy feat. So, we are definitely behind the eight ball here. It's not a position we want to be in and we are going to make sure we get the back-up car right and take advantage of the precious minutes that we have in tomorrow's race practices."

Joey Logano, on the other hand, had no choice. His No. 22 Team Penske Ford didn't make it through technical inspection in time to participate in the opening 20-minute round.

"Obviously, everyone is trying to push it and trying to get every ounce of speed out of our cars as we can," Logano said. "I don't even know why we didn't make it through. We made it through, but by the time we got through and got strapped in and got the car ready to go on the track, we just ran out of time."

Logano will start 35th and Johnson 37th according to owner points rank.