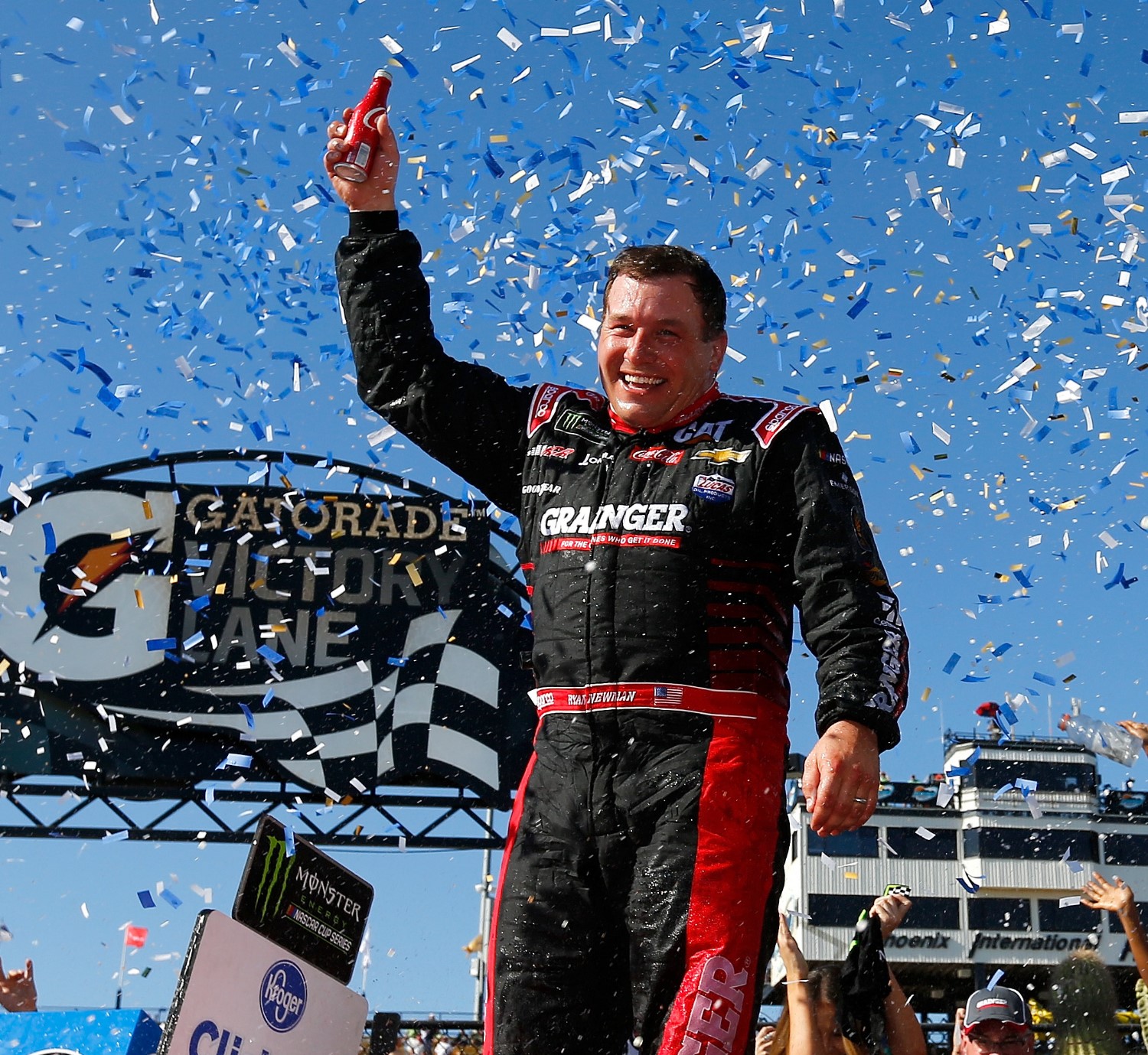 Opting to not come to pit road following a late-race caution, Ryan Newman was able to score a fortuitous win in today's Camping World 500 at Phoenix International Raceway. The victory snapped a 127-race winless streak for the driver of the No. 31 Grainger Chevrolet who lasted visit victory lane in the 2013 Brickyard 400. It was also the first victory for Richard Childress Racing since Kevin Harvick won the 2013 fall race at Phoenix.

Kyle Larson came home second in the No. 42 Credit Bank Chevrolet. Kyle Busch, who led 114 laps and seemed a sure bet for victory before a blown tire for Joey Logano brought out a caution with 8 laps remaining was third. Ricky Stenhouse Jr., who also didn't pit following the late caution came home fourth, with Brad Keselowski fifth.

The early part of the race was dominated by pole sitter Joey Logano, who took the early lead and captured the opening Stage. However, following the restart at the beginning of Stage 2, Chase Elliott charged past Logano with an outside pass into Turn 1. The driver of the No. 24 Napa Chevrolet would go on to win Stage 2.

Shortly thereafter, Kyle Busch was able to move past Elliott in the pits. From there the No. 18 Skittles Toyota seemed to be in control of the proceedings. However, on a day in which a number of drivers suffered tire failures, the Goodyear on the right front of the No. 22 Pennzoil Ford would send Logano into the Turn 1 tire barrier with 8 laps remaining.

[adinserter name="GOOGLE AD"]Busch and all but three drivers on the lead lap would come to pit road for fresh right-side tires for the restart, with Newman, Stenhouse and Martin Truex, Jr. opting to stay on the track.

"The list goes on and on. What a gutsy call by (crew chief) Luke (Lambert). I called for two tires and he called for none. I’ve won more races no tires than I have with four. I’m just proud of these guys. We had a good car all day. We kept it out of trouble and collected in the end."

“Everything’s great, we got a top five and that’s what we set out to do today and we got a third so we should be pumped about that and how good this Skittles Camry ran today," said Busch.

"Thanks to my pit crew – the car really liked clean air. We just got caught up in traffic a little bit early in the race, but we were mindful of that and just kind of bided our time and got up to the front when we did, but we had a little miscue there on pit road with Kurt (Busch) and from there it was just too many cars that stayed out. If it was just two that stayed out maybe, but we really needed the outside like (Kyle) Larson had. Overall we should be proud of our run today and we will move on."

“The guys gave me a great Skittles Camry today, that thing was fantastic there on the long runs and was really, really good and it had good speed to it, especially when we got out front. We kind of struggled a little bit in traffic, but the car liked the clean air and we were sitting pretty, but that’s racing."

“My guys gave me an awesome Skittles Camry and there’s nothing else I could ask for from them. We were in the right position and we were in a great spot to win the race today, but unfortunately just didn’t happen for us and that’s racing."

“We had a good car and that’s what it takes. When you have a good car you can run up front like that and we kind of missed it a little bit at Atlanta and we rebounded and tried to rebound a little bit at Vegas and had a shot for a top five there, but we weren’t able to capitalize on that, but we were today thankfully. It seems like every finish that’s destined for us it seems to end in a worse finish that day."

With the advantageous outside line on the ensuing restart, Newman was able to hold the lead for the final two laps to score his 18th career NASCAR Monster Energy Series Cup victory.

The final leg of the three-race NASCAR Goes West stretch will be next Sunday's Auto Club 400 at Auto Club Speedway in Fontana, CA. Johnson, the 2016 winner, will look to score his sixth win at ACS.