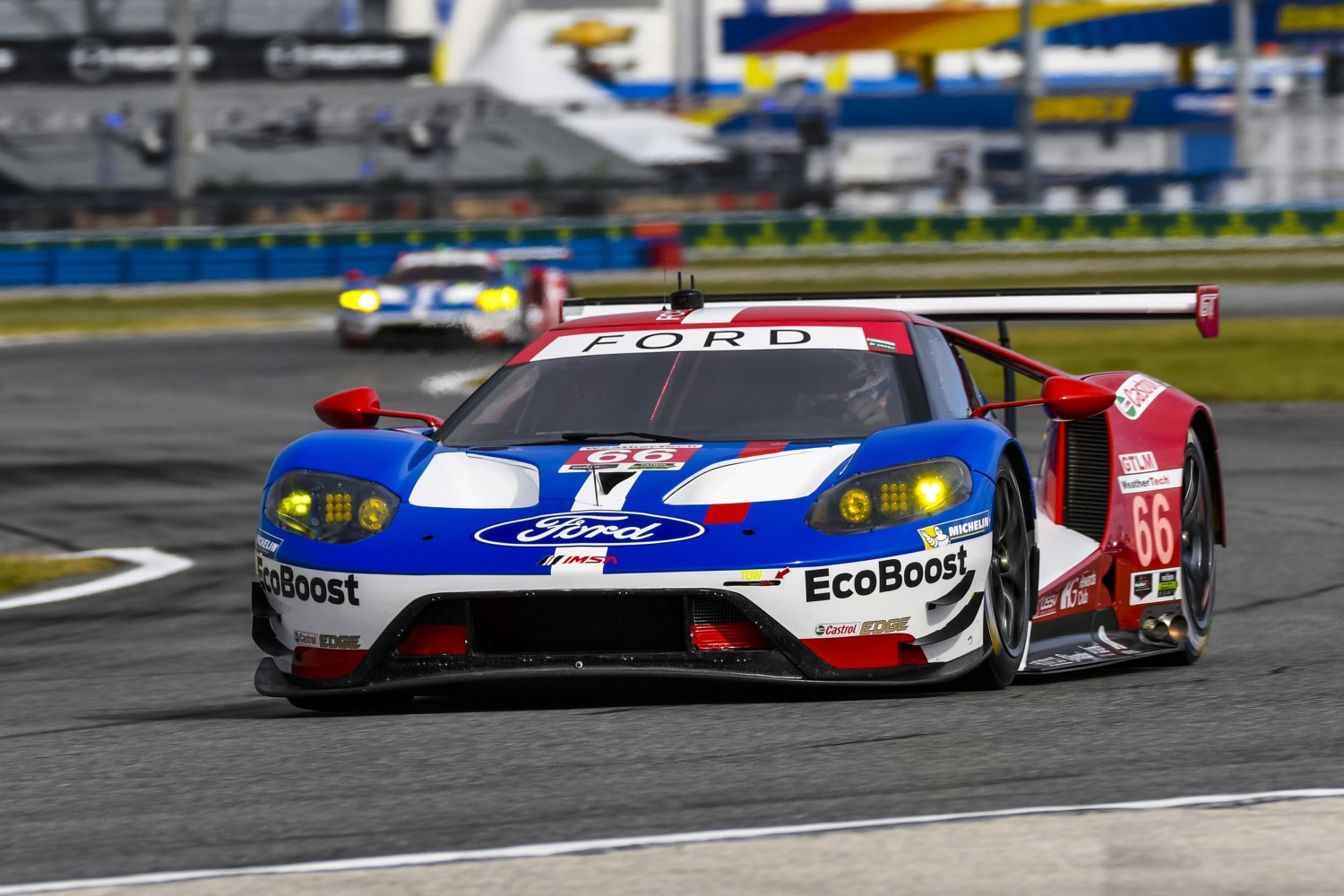 DAYTONA BEACH, Fla. – For many casual fans of sports car racing, it’s all about the Prototypes – sleek, built-from-the-ground-up racers that are, consequently, the fastest cars on the track. And there will be plenty of Prototypes in Saturday’s 65th Mobil 1 Twelve Hours of Sebring.

But veteran fans know that the closest racing often comes in the GT classes, which are cars that look very much like the cars some may drive to the races – assuming your daily driver is, perhaps, a Lamborghini Huracan, a Chevrolet Corvette or a Ferrari 488.

While the more sophisticated GT Le Mans (GTLM) cars are faster, this year it’s the GT Daytona (GTD) class, the largest in the four-class field, that is getting considerable attention. That’s because last year, IMSA, the sanctioning body for the IMSA WeatherTech SportsCar Championship, adopted the global GT3 specifications for the GTD field.

Worldwide, there are dozens of series that use the GT3 specifications, and numbers as large as those have encouraged many manufacturers to build GT3 versions of their street cars. It makes excellent financial sense – companies can design and manufacture race cars that can be sold in multiple markets, bolstered by a readily available supply of parts. For the 2016 season, it helped bring about a significant increase in the GTD field, and for 2017, it drew three additional manufacturers to the WeatherTech Championship.

[adinserter name="GOOGLE AD"]Those three are Mercedes-AMG, Lexus and Acura. While the sinister-looking Mercedes-AMG GT3 has raced elsewhere, it’s new this year to IMSA. There are three in the Sebring field sporting the familiar three-pointed star logo on the grille: The No. 75 SunEnergy Racing entry, the No. 50 Riley Motorsports/WeatherTech entry, and the No. 33 Riley Motorsports/Team AMG entry.

The No. 75 is brand new to the series. The No. 50 team competed last year in an Alex Job Racing Porsche, and the No. 33 Mercedes-AMG replaces the Dodge Viper that driver and team principal Ben Keating has raced since the inaugural WeatherTech Championship season.

Keating, owner of the world’s largest Viper dealership, had little choice but to make the change – his beloved Viper has ceased production. But after a promising debut at the season-opening 2017 Rolex 24 At Daytona, Keating is pleased with the choice he made.

“We learned a lot about the car at Daytona, and we’re still learning," said Keating, who will share the No. 33 with regular co-driver Jeroen Bleekemolen, and guest driver Mario Farnbacher. “But there’s a ton of potential in the Mercedes."

Michael Shank Racing has a solid reputation as a Prototype team, but for 2017, Ohio-based Shank, a former overall winner of the Rolex 24, jumped at the chance to help develop a GT3 racing version of the brand-new Acura NSX.

He has two cars entered in the Mobil 1 Twelve Hours – the No. 86, driven by Jeff Segal, Oswaldo Negri, Jr., and Tom Dyer, and the No. 93 driven by Andy Lally, Katherine Legge and Mark Wilkins. Negri is a longtime Shank driver in the Prototype class; Lally is a former IMSA champion and Monster Energy NASCAR Cup Series Rookie of the Year, and Legge has driven IndyCars, and spent the last couple of season driving the DeltaWing Prototype.

For a brand-new car, team owner Shank was more than pleased with the performance of his Acuras at the Rolex 24.

That also applies to the new Lexus RC F GT3. Last year Lexus delivered what it hoped would be a race-ready car to its U.S. team, 3GT Racing, headed by former Prototype Challenge team owner Paul Gentilozzi, who is also the winningest driver ever in the Trans Am series.

But the car simply wasn’t ready for prime time. It was redesigned, and debuted, like the Mercedes-AMG and Acura, at the 2017 Rolex 24. As at Daytona, there are two 3GT entries for Sebring: The No. 14, driven by Scott Pruett, Sage Karam and Ian James, and the No. 15, driven by Robert Alon, Jack Hawksworth and Austin Cindric. Pruett is a legend in sports car racing, with five overall wins at the Rolex 24, one overall win at Sebring, and a class win at the 24 Hours of Le Mans. Karam and Hawksworth move over from IndyCar.

Pruett crashed out of the Rolex 24 with just 52 laps in the books, leaving the developmental work to the team car, which completed 581 laps. Gentilozzi has seen a lot to like about the Lexus in the race and in testing, but as with the Acura, there’s work to be done.

“We have a really strong package in the RCF GT3," he says, “but we just need more track time to help benchmark it against the other entries in the class. GT Daytona is full of fast cars and talented teams, and I’m confident that we’ll be able to show our own strength very soon."

It doesn’t hurt that at various times during the Rolex 24, all three manufacturers took a turn at the head of the class. But it should be lost on no one that the winning GTD team was the unheralded Alegra Motorsports Porsche 911 GT3 R, which stayed out of trouble and executed its race plan with precision. That No. 28 team is back for the Mobil 1 Twelve Hours, with drivers Michael de Quesada, Daniel Morad, Michael Christensen and the addition of Spencer Pumpelly, who ran strategy for the team during the Rolex.

And don’t forget the six Lamborghini Huracan GT3s, or the three Audi R8 LMS GT3s, or another pair of Porsche 911 GT3 Rs besides the Alegra entry, or a BMW M6 GT3, or a lone Ferrari 488 GT3, fielded by Scuderia Corsa, the defending 2016 WeatherTech Championship GTD champions, and, for that matter, the GTD winner of the 2016 Mobil 1 Twelve Hours. The No. 63 Ferrari, with drivers Alessandro Balzan, Christina Nielsen and Matteo Cressoni, has to be a class favorite.

Unlike GTD, not much has changed in GTLM, except for the pair of Porsche GT Team entries for the brand-new, mid-engine Porsche 911 RSR, which made its world debut at Daytona, and very nearly won its class the first time out.

Of course, that Rolex 24 class victory was taken by the Ford Chip Ganassi Racing No. 66 Ford GT, one of four entered in the 11-car field at Daytona, with that number dropping to three at Sebring: The U.S.-based Nos. 66 and 67 will race at Sebring, as will one of the two European-based Ford GTs, the No. 68.

The Daytona win by the No. 66 came with the same driver lineup that took home an historic class victory at the 2016 24 Hours of Le Mans, on the 50th anniversary of the overall win by the original Ford GT. That same driver lineup is at Sebring – regulars Dirk Mueller and Joey Hand, aided by Sebastien Bourdais, fresh from a last-to-first IndyCar win last weekend at the Grand Prix of St. Petersburg. Bet against this team at your own risk.

But since the No. 911 Porsche finished right behind the winning Ford GT at Daytona, it’s worth keeping an eye on drivers Patrick Pilet, Dirk Werner and Frederic Makowiecki, as well as the No. 912 team car with Kevin Estre, Laurens Vanthoor and Richard Lietz. The rough-and-tumble Sebring International Raceway has a way of playing into the hands of the typically durable Porsches.

But don’t count out the defending GTLM winner of the race, the Chevrolet Corvette C7.R. There are veteran drivers in both Corvettes – Jan Magnussen, Mike Rockenfeller and Antonio Garcia in the No. 3, and in the No. 4, Oliver Gavin, Tommy Milner and Marcel Fassler.

Frankly, any team entered in GTLM can win at Sebring, including the pair of BMW Team RLL BMW M6 GTLMs, and the always-competitive Risi Competizione Ferrari 488 GTE, which took third at the Rolex 24 with these same three seasoned drivers – Toni Vilander, James Calado and Giancarlo Fisichella.

The Mobil 1 Twelve Hours of Sebring starts at 10:40 a.m. ET Saturday. FS1 coverage begins at 12:30 p.m. ET, while FOX Sports GO will stream the race flag to flag beginning at 10:30 a.m. ET when authenticated with FS1. IMSA Radio also will have live coverage throughout practice, qualifying and the race on IMSA.com.