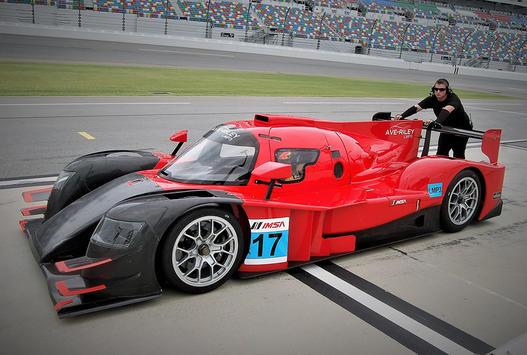 Example: On Thursday, March 16, at 4:35 p.m., the IMSA Prototype Challenge Presented by Mazda takes the green flag, and you don't want to miss it. On track will be the cars you've long associated with the series – the high-winding, normally-aspirated, 2.0L MZR engine, open-cockpit Mazda Prototype Challenge cars, which raced as the Prototype Lites 1 last season.

But this year, a brand-new class debuts that has never before competed in North America – the LM P3 series, a closed-cockpit car powered by a muscular 420-horsepower, 5.0-liter V-8, connected to a sophisticated sequential gearbox.

In fact, everything about the LM P3 class is sophisticated. Born in Europe, the LM P3 cars are sanctioned there by the French Automobile Club de l'Ouest, or ACO, which governs the cars that race in the 24 Hours of Le Mans. A total of six manufacturers have been approved by the ACO to build the cars, and models from four of those manufacturers will be represented in the two Prototype Challenge Presented by Mazda races, with the second one taking place on Friday, March 17, at 10:45 a.m.

[adinserter name="GOOGLE AD"]Since 2018 is the final season for the Prototype Challenge class that races on Saturday in the Mobil 1 Twelve Hours, IMSA saw the need to develop a new series that will give racers some experience in prototype cars similar to the ones that race in the top class of the WeatherTech SportsCar Championship, and even use tires from the same manufacturer, Continental. The LM P3 cars share the same configuration with the WeatherTech SportsCar Championship Prototypes, which will be battling for the overall win at the Mobil 1 Twelve Hours on Saturday.

Of course, the existing Mazda Prototype Challenge class has sent plenty of graduates to the WeatherTech SportsCar Championship series, and that number will only grow as the LM P3 class takes root.

The entry list for the LM P3 class this weekend is already impressive: Among the entrants is Paul Fix, who moves over from the top class in the Trans Am series, where he missed the season championship by a few points in the past two seasons. Fix, from Williamsville, New York, will be the only entry racing the Ave-Riley AR-2, which is the only American-built LM P3 car. It was designed by sports car legend Bill Riley, and is being manufactured under the leadership of Tony Ave.

Doug Peterson, of Bonita Springs, Florida, also has years of experience in the Trans Am series, winning two championships. He'll be driving an HP-Tech Ligier JS P3 for 3-Dimensional Services.

"Having the only Norma M30 in the world, we are taking a pretty big risk," said team owner Jeff Stone, "but even though this car is newest to market, I believe it will rise to the top quickly, and possibly even be an advantage."

Lonnie Pechnik, of Oceanside, New York, is another racer with a long resume in sports car racing, having raced with teams that include Flying Lizard, The Racers' Group and Speedsource. He'll be behind the wheel of the P1 Motorsports Ligier JS P3.

Alan Wilzig won a couple of titles in the Mazda Prototype Challenge series and, several years ago, made the news for building his own personal 1.1-mile race track in his front yard in New York state. He will be driving the only Ginetta LMP3 car in the field, backed by Wilzig Racing Manor – that's the name of the track – and fielded by Performance Tech Motorsports.

The rest of the 12-car LM P3 field includes Naj Husain of The Plains, Virginia, driving under the Extreme Speed Motorsports banner – that's the team that won the 2016 Rolex 24 At Daytona and the Mobil 1 Twelve Hours of Sebring; he'll be in a Ligier JS P3. Matthew Dicken, who has multiple Continental Tire SportsCar Challenge races under his belt, will be racing a Ligier JS P3, fielded by ANSA Motorsports and backed by the company he founded, Strategic Wealth.

Andrew Guiterrez hails from Mexico, and he'll be driving a Performance Tech Motorsports-prepared Ligier JS P3. Veteran racer Joel Janco, from Key Largo, Florida, is entered for a Ligier JS P3 with JDC Motorsports. He has raced in the Mazda Prototype Challenge Series since 2013, and he also plans to race the LM P3 in Europe this season.

Rob Hodes, from Montreal, Quebec, is in the K2R Motorsports Ligier JS P3, and is moving up from the Ferrari Challenge series. Gerry Kraut, of St. Paul, Minnesota, is in the Dougherty & Company Ligier JS P3, as a teammate to Joel Janco. Kraut, who has raced in the Lamborghini Super Trofeo series as well as the Mazda Prototype Challenge series, was the first to buy a new LM P3 car after IMSA made the announcement about the 2017 season.

And Juan Perez of West Palm Beach, Florida, rounds out the roster; he'll be in the P1 Motorsports/Sonic Tools Ligier JS P3.

As compelling a story as the brand-new LM P3 class is, don't forget they will be sharing the track with the Mazda Prototype Challenge series, formerly the Lites 1. That class has graduated multiple drivers to the IMSA WeatherTech SportsCar Championship series, including Tristan Nunez, Misha Goikberg, Sean Rayhall, Kenton Koch and Ed Brown, and the 2017 season has more than its share of rising stars and experienced series regulars.

Among them: Kyle Masson of Windermere, Florida, who finished fifth in the points last season, but he had a marvelous January – Masson was part of the Performance Tech Motorsports team that won the Prototype Challenge class at the 2017 Rolex 24 At Daytona. Masson is back, driving the Performance Tech/Neurospine Institute Mazda MZR 2.0-powered Elan DP02 entry. That car, Masson said, prepared him well for the IMSA WeatherTech SportsCar Championship series. "It isn't easy to drive, and it teaches you a lot about the proper technique," he said.

Also entered for Sebring is Robert Masson, driving a Performance Tech car for Global Microsurgical Center. That would be Dr. Robert Masson, a neurosurgeon, and Kyle's father. He attended a Skip Barber Racing school with his son in 2014, and was hooked. Howard Jacobs, of Ft. Lauderdale, Florida, is the third Performance Tech driver, sponsored by Cardio Access. And the fourth driver for Performance Tech is Stephen Dawes of Sidney, New York, racing for AIG Technologies. Dawes was formerly a member of the Performance Tech pit crew.

Tazio Ottis of Alameda, California, will be behind the wheel of the JDC Motorsports/Ottis Racing entry. Ottis has an extensive background in open-wheel racing, including Formula Mazda. JDC Motorsports, of course, competes at the highest level of the WeatherTech series, racing a new Oreca LM P2 car in the Prototype class. His JDC teammate is Kris Wright of Pittsburgh, Pennsylvania, moving over from the IMSA Continental Tire SportsCar Challenge, where he competed last year in a Porsche Cayman.

Gary Gibson of Libertyville, Illinois, is entered in the Team Perfect Pedal car. Gibson return to the series after posting a ninth-place finish in the 2016 points. Stuart Rettie of Aberdeen, Scotland returns to the series, racing an ODU Engineering car for Lion Rampant Group.

Brian Alder, who was 10th in points in 2016, is back racing for the team he owns, BAR1 Motorsports, with sponsorship from Top 1 Oil. BAR1 also has two Prototype Challenge entries in the Mobil 1 Twelve Hours of Sebring.

Paul La Haye, of Ville Platt, Louisiana, brings his formula car experience to the Mazda Prototype Challenge, racing the ONE Motorsports car. Jon Brownson of Breckenridge, Colorado, ran a partial schedule in the series in 2016, ending up 13th in points. He's back in the Eurosport Racing/WestRidge Development entry.

Both of this weekend's races will be streamed live at IMSA.tv, and – this is new for 2017 – the IMSA Prototype Challenge Presented by Mazda will be televised on a delayed basis on Fox Sports' FS2. The broadcasts will show highlights of the first race, and then flag-to-flag coverage of the second race.