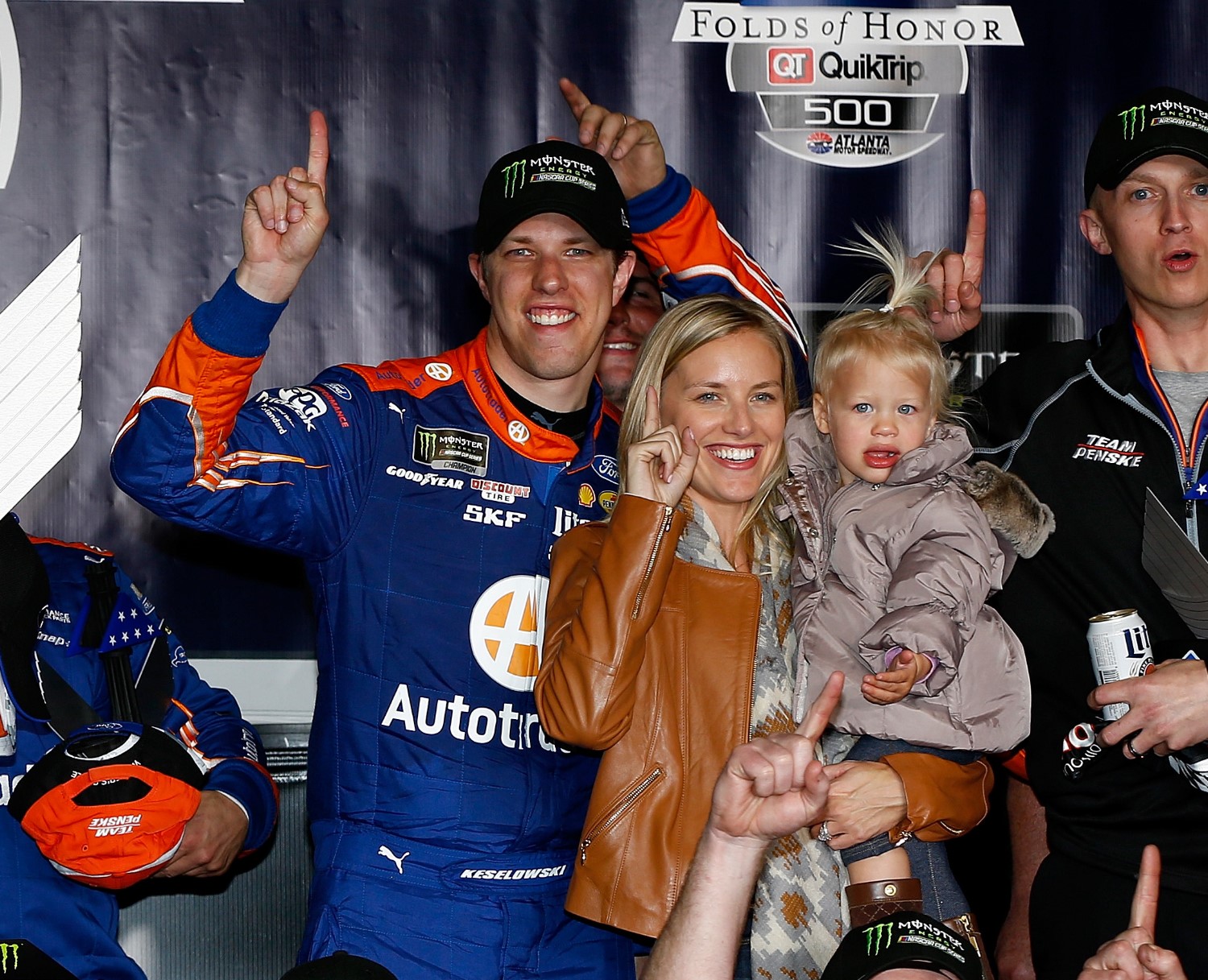 Kevin Harvick learned a hard lesson on Sunday – just because you have the best car, doesn't mean you win the race.

Harvick was one of 11 drivers nailed with speeding penalties on pit road during Sunday's Folds of Honor QuikTrip 500 at Atlanta Motor Speedway, only Harvick's penalty with 15 laps to go cost him a shot at a sure victory.

With Harvick relegated to the rear of the field, Brad Keselowski took over the spot three laps after the final restart and powered past Kyle Larson en route to an improbable comeback victory after rallying from a lap down early in the race to score his first-career Atlanta victory.

"You never know. That's how these races are," said Keselowski. "These races aren't easy. They're 500 miles and a lot can happen and when you think you've got it they slip away. I know how it goes. This one kind of fell in our lap at the end and my team put it all together when it counted. They gave me a great Ford Fusion and we were able to get by Kyle (Larson) there at the end. I knew that he wasn't going to be easy to pass. His car was great and I was able to make the right moves to get by him."

Keselowski went from leading the race to out of contention for the win twice during the course of Sunday's race.

Harvick started on the pole for the event and absolutely dominated the early running, leading 124 of the opening 127 laps and sweeping both of the first two 85-lap stages.

On lap 117, Keselowski was forced to pit after his right-front tire coming apart on the no. 2 Ford Fusion, putting him a lap down to the leaders.

Just 11 laps later, the entire field came to pit road for green flag stops, allowing Keselowski to race back to the lead lap and open up a 10 second lead on the field.

Harvick quickly trucked down Keselowski on his fresher tires and Keselowski ducked to pit road yet again with 25 laps left in the second segment.

At the start of the third segment, Keselowski restarted fourth behind Harvick, Elliott and Ryan Newman.

Harvick was able to stay out front due to top notch pit stops from his crew – winning the race off pit road during the first four caution flags.

After Bowyer smacked the wall with 45 laps to go, Keselowski beat Harvick off pit road to put him on point for the restart, but Keselowski's crew called him back in to tighten the lug nuts on the left rear, forcing Keselowski to the tail end of the lead lap for the restart and putting Harvick back in front.

[adinserter name="GOOGLE AD"] Harvick again powered away from the field and opened up 1.5 second lead over Elliott when the final yellow flag of the day waved on lap 311 after Austin Dillon lost power and coasted to a stop on the track.

The late caution brought the entire field to pit road and once again, Harvick's crew got him back out in front, but Harvick was caught speeding entering pit road and was sent to the back, giving Larson the lead ahead of Kenseth and Keselowski, who had fought he way back through the field into third.

On the final start with 11 laps to go, Larson and Kenseth both spun their tires, allowing Keselowski to move to second behind Larson.

Three laps later, Keselowski was able to duck under Larson coming through turns three and four to take over the lead for the final time and pulled away to a half-second lead at the checkered flag.

Larson picked up his first-career Atlanta top-five finish, but for the second week in a row had a sure victory slip away in the closing laps.

"Any time I was in front of (Keselowski) on short runs, he's drive around me up top. And so, I knew I was going to have to take his line away on that start there for a couple of laps and try it," said Larson. "I just didn't have enough grip or not as much as I'd hoped. He did a good job being a lane lower than me and getting to my inside. So, it was disappointing not to get the win, but I'm happy about our second place run at a 1.5-mile where I struggle at."

Harvick led a race high 292 of the 325-lap distance and managed to fight his way back to a ninth-place finish, but put the blame solely on himself for the speeding penalty late in the race.

"This place, for whatever reason, I just feel like I'm snake bitten," said Harvick. "It's my own doing today. I really didn't think I was even close on pit lane. It gets to bouncing around, I thought I was being conservative, apparently I wasn't. I was just pushing it too hard.

"I just made a mistake that I preach all the time that you don't need to make and beat yourself and then you go out and make it yourself instead of following all the things you preach. That part is hard for me to swallow. I just, one way or another I have figured out how to lose races here at Atlanta after being so dominant. We will pick 'em up and start again next week."

Hometown favorite Chase Elliott fought back from a speeding penalty of his own on lap 212 to record his first ever top five finish at Atlanta.

"A little bit of luck, a little bit of good pit stops, and kind of worked out," said Elliott. "It just didn't work out when it counted."

Despite his bad luck, Harvick's leaves Atlanta as the Cup Series points leader with a four-point edge over Kurt Busch. Keselowski is third in points, followed by Elliott and Joey Logano.