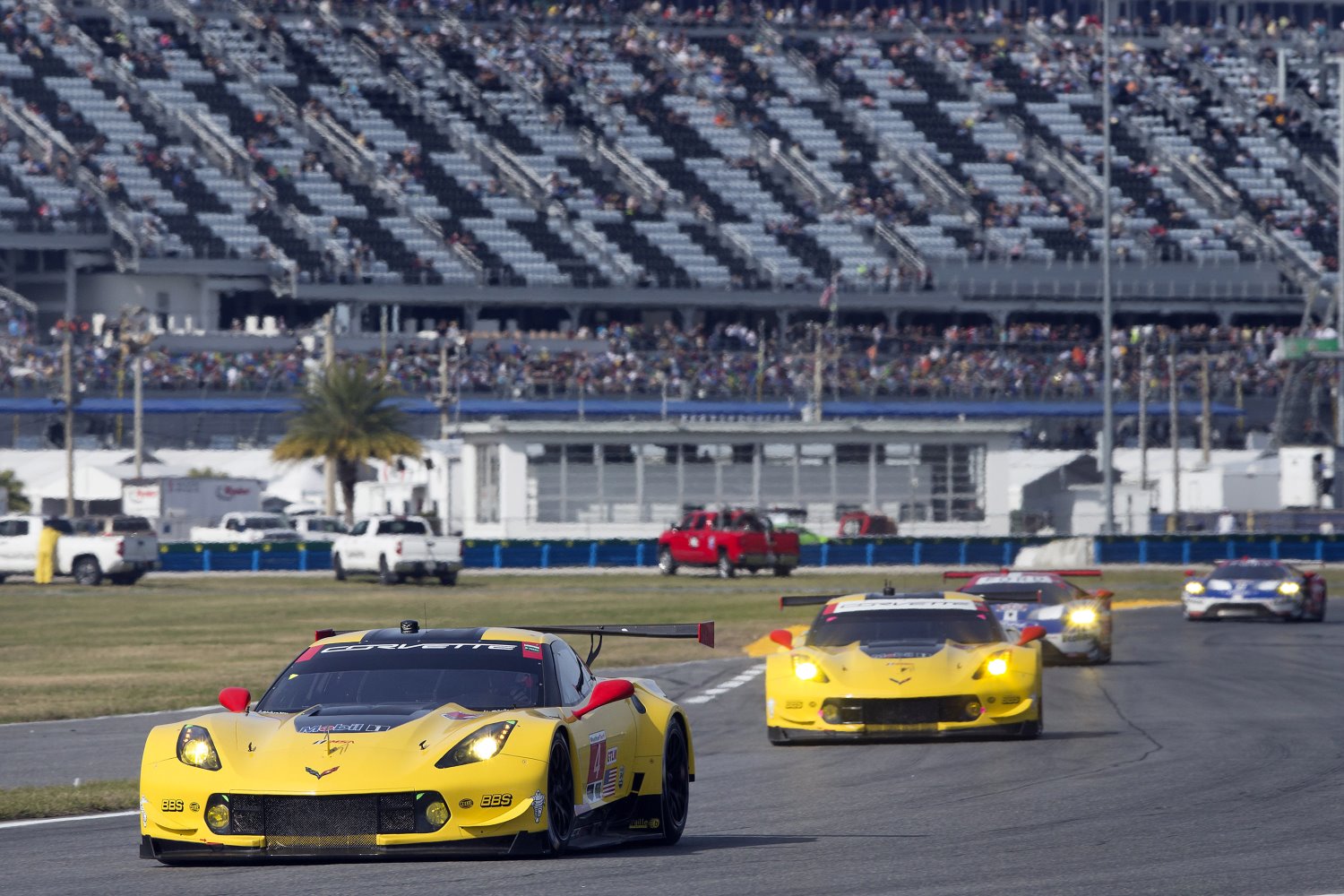 One year ago, Corvette Racing produced one of the most iconic finishes in sports car racing history in the Rolex 24 At Daytona. Now for the obvious question: what will be the encore?

The 1-2 GT Le Mans (GTLM) class finish in the 2016 Rolex 24 – where Corvette Racing's two Mobil 1/SiriusXM Chevrolet Corvette C7.Rs set an event record for closest margin of victory – is one that won't be forgotten any time soon. Now it's time to create another chapter in Corvette Racing's Daytona legacy. It's one that includes three victories in six starts including an overall victory in 2001.

Another one this year would be three straight and would make Corvette Racing the first team in nearly a decade to claim three consecutive Rolex 24 race wins. To do so, the team will rely on much of the same personnel that was part of last year's thrilling victory.

In the No. 4 Chevrolet Corvette C7.R, defending Rolex 24 champions Oliver Gavin, Tommy Milner and Marcel FÃ¤ssler are back after each claimed their first career victories in the event. It also started a run that resulted in a sweep of the GTLM Manufacturer's, Driver's and Team titles for Chevrolet, Milner and Gavin, and Corvette Racing.

In the No. 3 Mobil 1/SiriusXM Chevrolet Corvette C7.R, the trio of Antonio Garcia, Jan Magnussen and Mike Rockenfeller reunite after a thrilling chase to the finish in 2016. Garcia and Magnussen placed third in the GTLM Championship in 2016 on the strength of an overall victory at VIR.

[adinserter name="GOOGLE AD"]There isn't a manufacturer with more success at Daytona than Chevrolet. The Bowtie Brand has more than 40 victories to its credit at Daytona in the top levels of sports car and stock car racing.

The Rolex 24 was the site of Corvette Racing's debut on Jan. 31, 1999. Since that first race, the team has competed in more than 170 events around the globe with 102 victories worldwide – including five wins in 2016 – along with 11 Manufacturer and Team championships in the American Le Mans Series and WeatherTech Championship to go along with eight victories at the 24 Hours of Le Mans.

The 55th Rolex 24 At Daytona is the start of the 2017 IMSA season and is set for 2:30 p.m. ET on Saturday, Jan. 28. It will air on live on FOX beginning at 2 p.m. ET with coverage also on FOX Sports 1, FOX Sports 2 and FOX Sports Go. Live audio coverage from IMSA Radio is available on IMSA.com.

The start of the 2017 also means the return of the Chevrolet's Corvette Racing Display. From Friday through Sunday, fans on-hand for the Rolex 24 At Daytona can view and learn about a wide variety of Chevrolet vehicles and performance parts in the Daytona International Speedway infield midway. Among the Chevrolet attractions at Daytona include:

ANTONIO GARCIA, NO. 3 MOBIL 1/SiriusXM CHEVROLET CORVETTE C7.R: "I feel we are as prepared as we can be heading into the Rolex 24. In this race you never really know, however. There are a lot of variables and things that can happen that are out of your control. What we focus on are things that we can control. In that sense I think we are in good shape. Everyone at Corvette Racing knows what it takes to win this race. We all do our jobs to the best of our abilities, and more often than not it is enough to win. I've been fortunate enough to win the Rolex 24 twice, and a third would be a great way to erase last year's finish and get our season off to the best start."

JAN MAGNUSSEN, NO. 3 MOBIL 1/SiriusXM CHEVROLET CORVETTE C7.R: "We feel confident for this year's Rolex 24. Historically we have been very good here as the last two years have shown with two wins and two more podiums between our two cars. The key is that the Corvette is a very well balanced car that has good stability and power along with very good braking. In a lot of ways, the Rolex 24 is very different from a race like Le Mans. Temperatures will be much colder and there is much more running in the dark, although the speedway lights help. We know how big a challenge this will be but there is a high level of experience we can all fall back on. I'm definitely excited."

MIKE ROCKENFELLER, NO. 3 MOBIL 1/SiriusXM CHEVROLET CORVETTE C7.R: "The race week is always very compressed so you have almost no time to really develop the car or make any big setup changes. The Corvette hasn't really changed since last year so we have our baseline for the Rolex 24. There still are things we can fine-tune and work on things like driver changes and pit stops. Everyone needs to work together perfectly to finish the race and have a chance at victory."

OLIVER GAVIN, NO. 4 MOBIL 1/SiriusXM CHEVROLET CORVETTE C7.R: "You always try to learn everything you can from last year. Yes, it was an amazing finish but it was by no means perfect. We had our issues along the way and some things that didn't quite run to plan. But with this race, you know you have to be there at the end. Even if you have a problem at the start and you go a couple of laps down, the way the caution periods and wave-by systems work, you can often make that up. Ultimately you need to stay smart and clean to keep the car on the lead lap in the last couple of hours where you can really push hard and see where you stack up. The competition is fierce, and it always is. It's ratcheted up again just another level. It seems like we say that a lot but it's very true. You can't ever take your eye off it to be ready every lap. Nothing is ever given to you."

TOMMY MILNER, NO. 4 MOBIL 1/SiriusXM CHEVROLET CORVETTE C7.R: "What happened at the Roar was disappointing, but I don't feel that there is a better team to rebound than Corvette Racing. We've seen it many times where our backs feel like they are against the wall and we somehow overcome that adversity. So this is another opportunity for us to do it again. Oliver, Marcel and I make a very strong team as we saw last year. It gives you a ton of confidence to know you have teammates of their caliber plus the experience and never-give-up attitude of everyone at Corvette Racing. This is a big challenge for us all, but we say bring it on."

MARCEL FASSLER, NO. 4 MOBIL 1/SiriusXM CHEVROLET CORVETTE C7.R: "I have to say that the finish of last year's race will be something I will never forget. It was my first Daytona and I didn't expect to win right away. It was a great race and probably the best finish I've ever seen in motorsport. The experience was fantastic to come here with Corvette Racing and win immediately. With all the experience from last season and the test here in December, I can find driving the Corvette much easier and find the pace much quicker. The confidence for me is definitely there."

DOUG FEHAN, CORVETTE RACING PROGRAM MANAGER: "It is always a huge thrill for us to return to Daytona each year for the Rolex 24. This was the first race for the Corvette Racing program so it's like coming full circle each year we come back. We have had a full year to reflect on last year's record finish and it's time to create new highlights. We are well equipped for the challenge again with our key strengths: the experience and continuity of everyone at Corvette Racing. The Corvette C7.R is proven. The crew, the engineers and the drivers are all proven. Considering the intensity of racing in the GT Le Mans class, those are vital components that can make the difference in a race like the Rolex 24. We are hoping for another classic!"