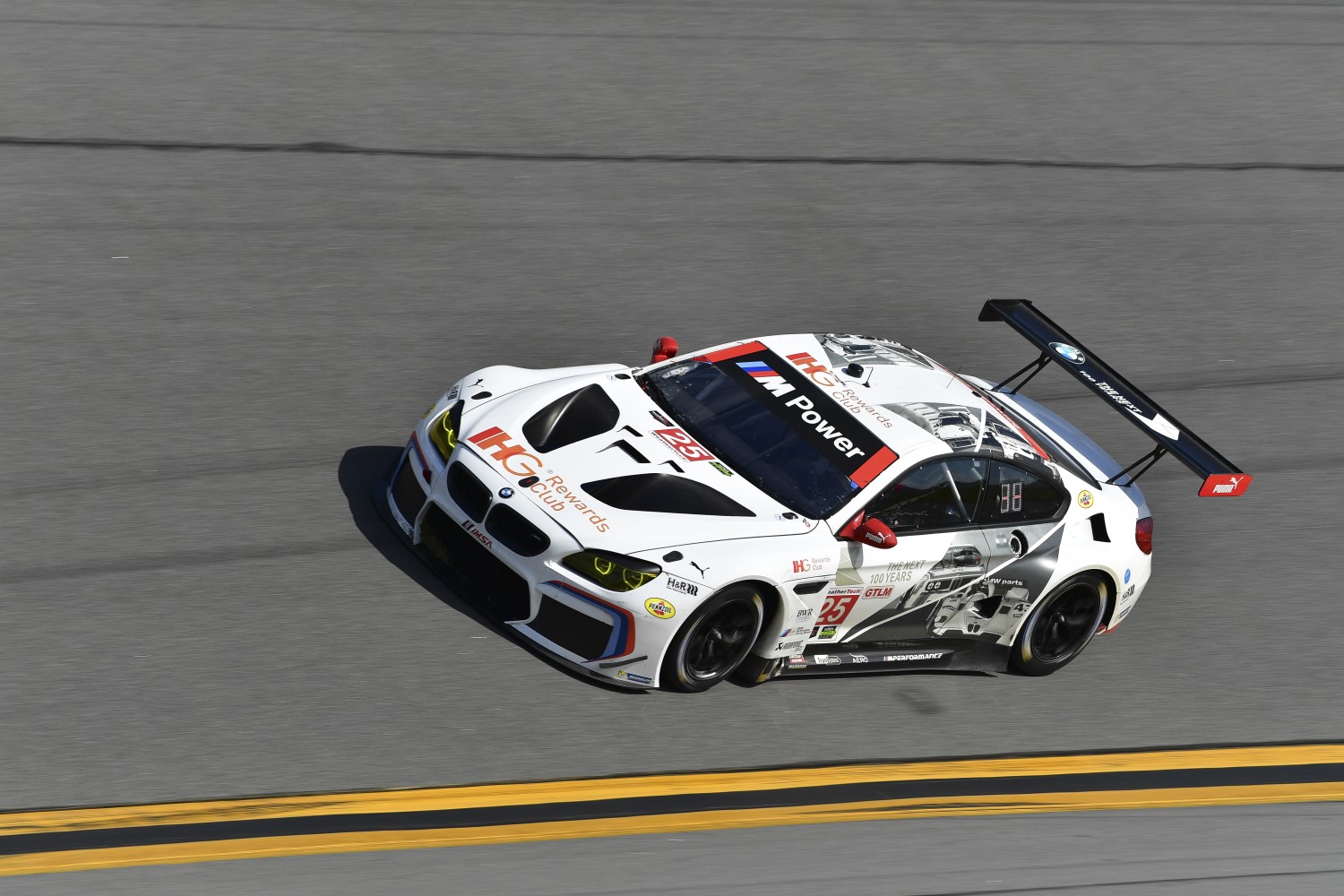 The three-day Roar Before The Rolex 24 At Daytona test session has become a motorsports tradition for more than a decade, annually signifying the start of a new year and the beginning of the professional motorsports season.

For the 2017 Roar Before The Rolex 24 At Daytona – which is mandatory for participants in the 55th Rolex 24 – 55 cars have been entered for the test on Jan. 6-8 on the 3.56-mile Daytona International Speedway road course.

"We could not be more proud of the field that has been assembled for both the Roar and the 55th Rolex 24 At Daytona," said IMSA President Scott Atherton. "It is truly an honor to welcome our longstanding manufacturers, drivers and teams back to the WeatherTech Championship in 2017, while at the same time celebrating the arrival of several new manufacturers, race cars and competitors. This weekend's Roar Before The Rolex 24 will offer a sneak preview for what will be a historic season in 2017."

This weekend kicks off a bold new era for North American Prototype racing, and also features the debut of many new GT race cars. Leading the way will be brand-new Daytona Prototype international (DPi) and LM P2 race cars in the Prototype (P) class.

[adinserter name="GOOGLE AD"]Among the top Prototype class participants will be 2016 WeatherTech Championship Prototype champions Eric Curran, Dane Curran and the No. 31 Whelen Engineering Racing Cadillac DPi. Curran and Cameron will be joined by Seb Morris and Mike Conway in the No. 31, while their teammates, two-time Prototype champions Joao Barbosa and Christian Fittipaldi will share the No. 5 Mustang Sampling Racing Cadillac DPi with Portuguese racer Filipe Albuquerque.

After winning the 2016 Rolex 24 and Mobil 1 Twelve Hours of Sebring Fueled by Fresh From Florida, Tequila Patron ESM returns to full-time WeatherTech Championship competition in 2017 with a two-car Nissan DPi program.

Sharing the team's No. 2 entry will be Scott Sharp and Pipo Derani – both part of the Daytona- and Sebring-winning driver lineup – along with Scotland's Ryan Dalziel, who drove the 2016 WeatherTech Championship for Visit Florida Racing while contesting the FIA World Endurance Championship (WEC) with Tequila Patron ESM. The team's No. 22 Nissan DPi will be shared by Ed Brown, Johannes van Overbeek, Bruno Senna and 2015 WEC LM P1 champion Brendon Hartley.

Another entry sure to attract attention will be the No. 10 Konica Minolta Cadillac DPi from Wayne Taylor Racing to be shared by full-time co-drivers Jordan and Ricky Taylor, along with endurance regular Max Angelelli and four-time Monster Energy NASCAR Cup Series champion Jeff Gordon. The 2017 Rolex 24 marks Gordon's second appearance in the twice-around-the-clock race and first since 2007, when he co-drove with Angelelli, Wayne Taylor and Jan Magnussen to a third-place finish.

Also making its competition debut at the Roar will be a pair of Mazda DPi entries from Mazda Motorsports. Tristan Nunez, Jonathan Bomarito and Spencer Pigot are entered in the team's No. 55 Mazda/Castrol/ModSpace entry, while Tom Long and Joel Miller will share the team's No. 70 entry with IndyCar star and recent "Dancing With The Stars" runner-up James Hinchcliffe.

Joining the DPi entries in the Prototype class are five new LM P2 race cars – all of which are powered by Gibson V8 engines – looking to battle for the overall victory. Visit Florida Racing continues its longstanding WeatherTech Championship Prototype program in 2017 and has entered the No. 90 Multimatic/Riley for co-drivers Marc Goossens, Renger van der Zande and Rene Rast.

A pair of longtime Prototype Challenge (PC) teams has moved up to full-time Prototype class status in 2017 with LM P2 machinery. PR1/Mathiasen Motorsports has entered the No. 52 Ligier for Tom Kimber-Smith and other drivers still to be announced, while JDC-Miller MotorSports will field the No. 85 ORECA for Misha Goikhberg, Stephen Simpson, Chris Miller and WEC regular Mathias Beche.

The PC class features five entries with many drivers still to be announced. BAR1 Motorsports will field the No. 20 ORECA FLM09 for a lineup that includes 2004 Indianapolis 500 winner Buddy Rice, as well as the No. 26 ORECA FLM09 that will include 2014 Continental Tire SportsCar Challenge Grand Sport champion Trent Hindman.

Starworks Motorsport – the reigning PC championship-winning team – will have a pair of entries, the Nos. 8 and 88, and the No. 8 lineup includes Ben Keating, who also will be competing in the GT Daytona class. Performance Tech Motorsports will field the No. 38 machine for 2016 Mazda Prototype Lites Presented by Cooper Tire champion Clark Toppe and Kyle Masson.

The GT Le Mans (GTLM) class features an 11-car entry of top-tier factory-backed GT cars led by 2016 Rolex 24 and WeatherTech Championship titlists Oliver Gavin and Tommy Milner in the No. 4 Corvette Racing Chevrolet Corvette C7.R. Gavin and Milner will be joined again by Marcel Fassler in the No. 4 machine at Daytona, while teammates Jan Magnussen, Antonio Garcia and Mike Rockenfeller will share the No. 3 Corvette.

Many eyes will be on the pair of brand-new Porsche 911 RSRs to be fielded by the Porsche GT Team. Co-driving the No. 911 RSR will be 2015 WeatherTech Championship GTLM driver champion Patrick Pilet alongside Dirk Werner and Frederic Makowiecki, while the No. 912 machine will be shared by Kevin Estre, Laurens Vanthoor and Richard Lietz.

Ford Chip Ganassi Racing will have a four-car Ford GT armada at Daytona this year. The team's full-time WeatherTech Championship entries – the Nos. 66 and 67 Ford GTs – will be shared by 2016 24 Hours of Le Mans winners Joey Hand, Dirk Mueller and Sebastien Bourdais in the No. 66, and Ryan Briscoe, Richard Westbrook and IndyCar and Indianapolis 500 champion Scott Dixon in the No. 67.

Sharing the team's pair of regular FIA WEC Ford GTs will be Olivier Pla, Stefan Mucke and Billy Johnson in the No. 68 entry, with Andy Priaulx, Harry Tincknell and another IndyCar and Indy 500 champion, Tony Kanaan, in the No. 69 machine.

BMW Team RLL has a pair of BMW M6 GTLM entries, which includes the No. 19 "art car" to be shared by Bill Auberlen, Alexander Sims, Augusto Farfus and Bruno Spengler. The art car was designed by renowned artist John Baldessari and will be the first BMW art car to be raced in North America since the program began in 1975. John Edwards, Martin Tomczyk, Nicky Catsburg and Kuno Wittmer will share the team's No. 24 BMW M6 GTLM.

Perennial Ferrari competitors Risi Competizione will field the lone prancing horse in the GTLM field, the No. 62 Ferrari 488 GTE for Toni Vilander and additional co-drivers to be announced.

Longtime Prototype class competitors Michael Shank Racing moves to GTD in 2016 to field a pair of Acura NSXs. Co-driving the team's No. 86 machine will be Ozz Negri, Jeff Segal, Tom Dyer and IndyCar and Indy 500 champion Ryan Hunter-Reay. In the No. 93 Acura will be Andy Lally, Katherine Legge, Mark Wilkins and second-generation IndyCar star Graham Rahal.

A pair of Ferrari 488 GT3s has been entered, led by the No. 63 Scuderia Corsa 488 for defending GTD champions Christina Nielsen and Alessandro Balzan. A total of eight Lamborghini Huracan GT3s have been entered in GTD, including Paul Miller Racing's No. 48 Castrol Edge/Universal Industrial Sales entry for Madison Snow, Bryan Sellers, Bryce Miller and Andrea Caldarelli.

Audi, the 2016 GTD manufacturers' champion in both the WeatherTech Championship and the Patron Endurance Cup, has three R8 LMS machines on the current entry list led by the No. 57 Stevenson Automotive Group entry for Lawson Aschenbach, Andrew Davis, Matt Bell and Robin Liddell. Alex Job Racing will field the No. 23 Audi for 2015 WeatherTech Championship GTD champions Bill Sweedler and Townsend Bell, who will be joined by Frankie Montecalvo and Pierre Kaffer.

Five Porsche 911 GT3 Rs have been entered, including the No. 54 Composite Resources Porsche from multi-time PC champions CORE autosport, which moves to GTD with full-season co-drivers Jon Bennett and Colin Braun. Bennett and Braun will be joined by Porsche factory driver Patrick Long and Nic Jonsson.

The first of seven WeatherTech Championship practice sessions over the three-day Roar test gets under way at 10:20 a.m. ET on Friday. The IMSA Continental Tire SportsCar Challenge also will participate in the Roar with six on-track sessions in preparation for its four-hour season-opening BMW Endurance Challenge on Friday, Jan. 27. All sessions are open to the public.

"The Rolex 24 At Daytona has always featured an impressive list of cars, teams and drivers, but this year's lineup is unprecedented," Atherton added. "The combination of all new prototypes, the new GT cars and manufacturers and the long list of world-class drivers from nearly every form of motorsport is truly humbling. For IMSA and sports car fans around the world – this is what we've been waiting for."

FOX Sports will offer 23 hours of live programming from the 2017 Rolex 24 At Daytona, beginning with a three-hour FOX network telecast beginning at 2 p.m. ET on Saturday, Jan. 28, followed by expanded coverage on FS2 and FS1.