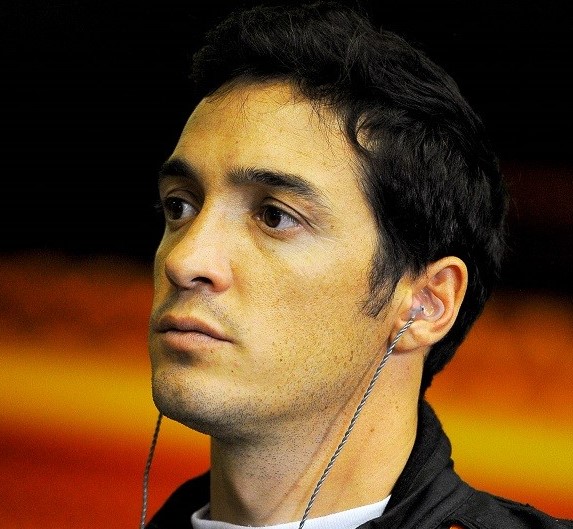 SONOMA, Calif. — You had figured this new guy, Alvaro Parente (ALVA-ROW PAW-RENT), was going to be a factor in the Pirelli World Challenge GT series in 2016.

Coming from single-seaters in Europe and a four-year McLaren factory sports car racer, Parente had some impressive credentials. He was scheduled to be the leading driver for the K-PAX Racing squad that included youngsters Colin Thompson (age 21) and Austin Cindric (age 17).

He had just won the 12 Hours of Bathurst in Australia last February too. So, when he hit the U.S. scene later that month for his first Pirelli World Challenge test at Circuit of the Americas, you had to think he was going to be in the mix for the coveted GT title.

But, let's be honest, Parente had last been at a U.S. track in 2007, the A1GP race at Mazda Raceway Laguna Seca. In fact, it was the only U.S. track he had ever seen previously.

"I raced in the A1GP race at Laguna Seca and then I drove from Monterey to Las Vegas to see that city," said Parente, the new 2016 Pirelli World Challenge GT champion. "Other than that, I never saw any of the U.S. tracks in person. I did watch video of the tracks but it's not quite the same."

The personable Portugal native did not worry about any of those elements when he took to the COTA track for the PWC season opener. But the weekend didn't go quite Parente's way with a race penalty.

By the time he hit the streets of Long Beach, Parente was a contender everywhere and scored the pole position and later his first race win. This was followed by another victory at Barber Motorsports Park, a double victory weekend at Lime Rock, a win at Mid-Ohio and then the wild, crazy Mazda Raceway Laguna Seca finish in October.

At Laguna Seca, Parente was running third behind race leader O'Connell and Parente's championship rival, Long. On the final lap, O'Connell and Long made contact, Long went wide and Parente took the checkered flag in second place to clinch the crown.

Later in the afternoon, O'Connell was docked 2.1 seconds for his "avoidable contact" with Long on the final lap and Parente was awarded the victory.

"That last lap, I thought it was over under yellow flag, then suddenly it was a little bit of a confusing time when the race got started again on the final lap," said Parente. "That last lap, when Pat [Long] went for the pass in Turn 5, he didn't clear Johnny before he got to the corner. Johnny had a great race weekend. In my opinion, he was the fastest one out there and he wanted to win the race. He didn't want to let Pat by, so he fought for his position, they touched. Pat risked the move, and it didn't go so well. Pat went wide and I took the opportunity and passed him."

Parente made the most of the wild final lap to secure the GT title in his PWC debut season.

"I couldn't believe it when I saw them hit, and then I crossed the finish line and found out I had won the championship," Alvaro explained. "I don't know how to explain it. It was a crazy moment. I thought the race was over before that and to have that happen on the last lap, what drama!"

The first-year PWC GT racer had shown the talent that everyone had mentioned back in February with a season-high six wins and five pole positions.

"When the season kicked off, I said to my guys from race one that I'm here to fight for the championship," he admitted. "When we found ourselves in a good position, I started to win races and really getting a look at the championship. It was very good until the Utah weekend where, unfortunately, Michael Cooper took me out of the first race where I was in position two."

That's when Patrick Long took a 21-point lead in the GT category with three races remaining.

"But from then onwards, the championship was a lot closer. We lost a lot of points that weekend which would have made my position a lot more comfortable for the last rounds of the season. But it wasn't the case, so it was a last-lap thing, so what can I say?"

Entering the finale in Monterey, Parente held a small two-point lead over Long and basically had to finish in front of the Porsche factory driver to claim the GT title.

"I was trying to put some pressure on Pat (who ran second to Parente in third) the whole race but he had a good pace," Parente said. "There was really one or two chances where I could have risked a bit more. There wasn't a very clear opportunity and Pat defended well all race long."

But when Long slid wide in turn 5, Parente seized the opportunity.

"I talked to (Pat) a little bit (after the race), but I didn't know what to say!" Parente said. "Pat is a racer, a hard racer. What a great fight we had all season. He went for the win there."

"What a bunch of great competitors. Pat Long, Johnny O'Connell, my teammates, all of the GT guys. It was a great season for K-Pax Racing, McLaren and myself."

It was a classic last lap championship for a guy who no one in North America racing really knew in February. Now, sports car racing knows Alvaro Parente as the Pirelli World Challenge GT champion.