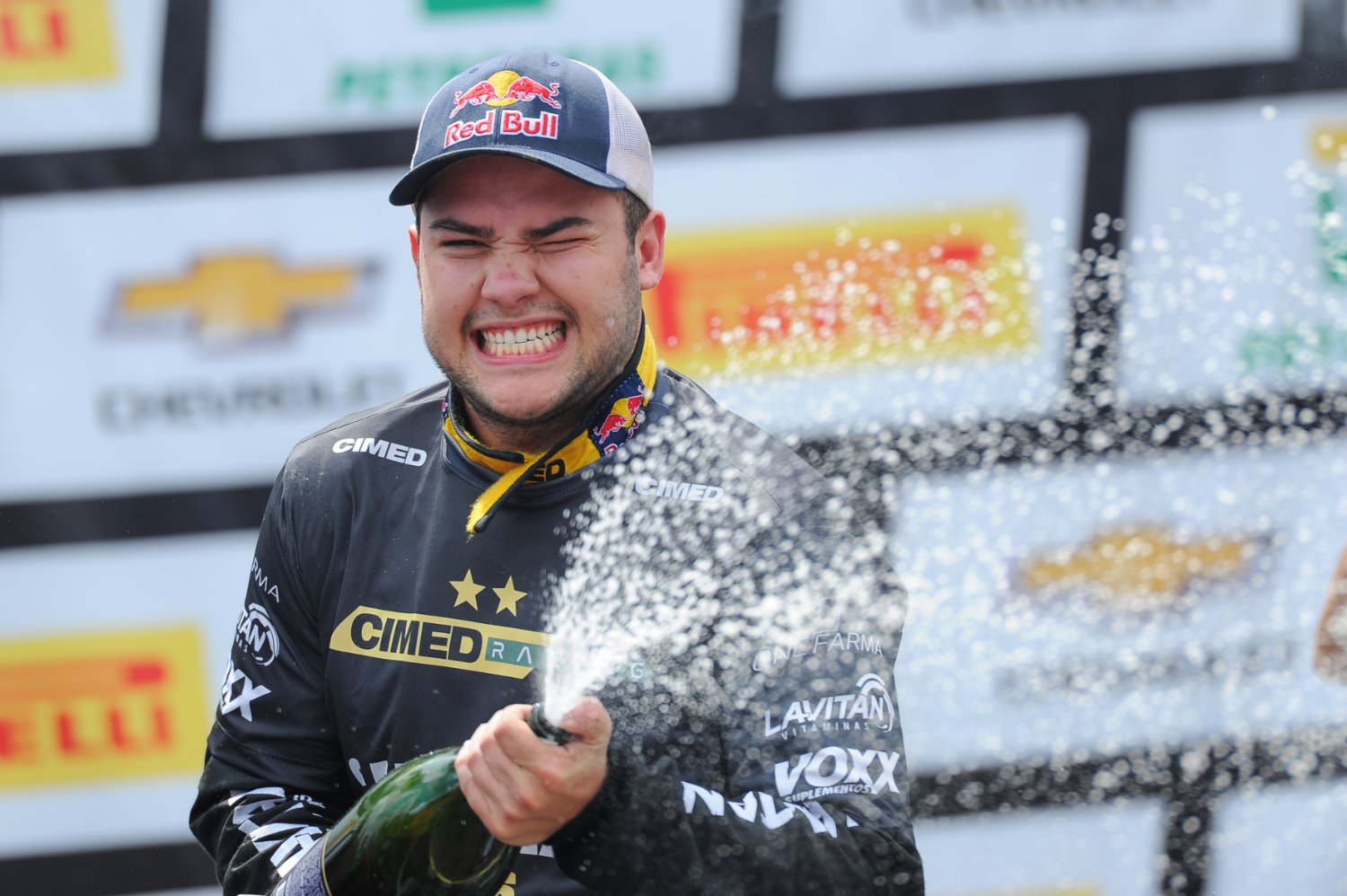 A real thriller went on in Interlagos this Sunday morning in Sao Paulo for the final race of the Brazilian V8 Stock Car 2016 season. A light rain came on in the middle of the race, and it was a matter of choice to pit and put wet tires or to risk and stay on slicks. Strategy played an important role during the 40 minutes of the race, allowing Rubens Barrichello to dream with the title after staying on the wet track with slicks while his leading rival went to the pits.

However, it was not enough, since the Cimed Racing driver only need a 12th place to confirm himself as the 2016 champion. Fraga returned in 10th place after his pit stop and there he stayed until the checkered flag.

"For me, it is like I am talking about one more race in my career. I still don’t know for sure what I am feeling, because it did not click yet. Still, we are going to party tonight", said Fraga.

The race winner was Daniel Serra, in a perfect farewell for Red Bull. The company leaves the series in the end of the season. "It was sensational! If we could write what we wish for this goodbye, it would not be better that this. It is a team I race for eight years and a company that have backed me for ten years. So, to finish the season with a win is more than rewarding", told Serra.

[adinserter name="GOOGLE AD"]Rubens Barrichello, after spinning on lap 6 after overtaking Ricardo Mauricio on the Senna S, dropped to 18th place and choose not to pit when the rain came. "That spin made my option easier because Fraga pitted. The conversation with my engineer was identical the one I had with Ross Brown at the German Grand Prix in 2000. The team told me to pit, I told them the track was dry, and when they said Fraga was in the pits, I decided to stay", said the runner-up.

He moved up to fourth place, overtook his teammate Allam Khodair and Julio Campos to engage a chase on the leader Daniel Serra. He smashed the seven-second gap to cross the line only 0s6 behind the winner. "We didn’t lose today. I turned on that final chicane like it was the last time in my life I was doing it", he highlighted.

"Even though", he continued, "winning or not, we could not take the championship because we needed Fraga to finish 13th or lower. Anyway, we fought hard as we always do. We had our problems, especially in the first races of the season. It was, however, a positive year, and we will come back even stronger", he finished.

Newly crowned champion Felipe Fraga is the youngest Stock Car champion in Brazil, taking the record from Giuliano Losacco, who won the 2004 championship at the age of 27 years. Fraga is only 21. "It was a tense race. During the early stages, I was driving calmly, in the lead, but when it started to rain, things got a little ugly. I almost ran over my mechanics in the pits, but we managed to come back in a position we would take the title. And that is what we did. I am enormously proud of the team, this title is theirs, too", told the Cimed driver.

Felipe Fraga is born in Jacunda, in the northern state of Para, and started his karting career in 2001 at the age of 6. He won five times the national karting championship when moved to single-seaters in 2012. Fraga raced in the Formula Renault Alps in Europe, but returned to Brazil the following year, becoming the Stock Car Light champion.

His debut in Brazil’s leading racing series came in 2014, and he won at his debut, becoming the youngest ever Stock Car winner at the age of 18 – he didn’t even had his driver’s license yet. In 2016, he won five races and took four pole positions. Another highlight of his season was his one-million reais victory in September. Felipe stays with the Cimed team for 2017.