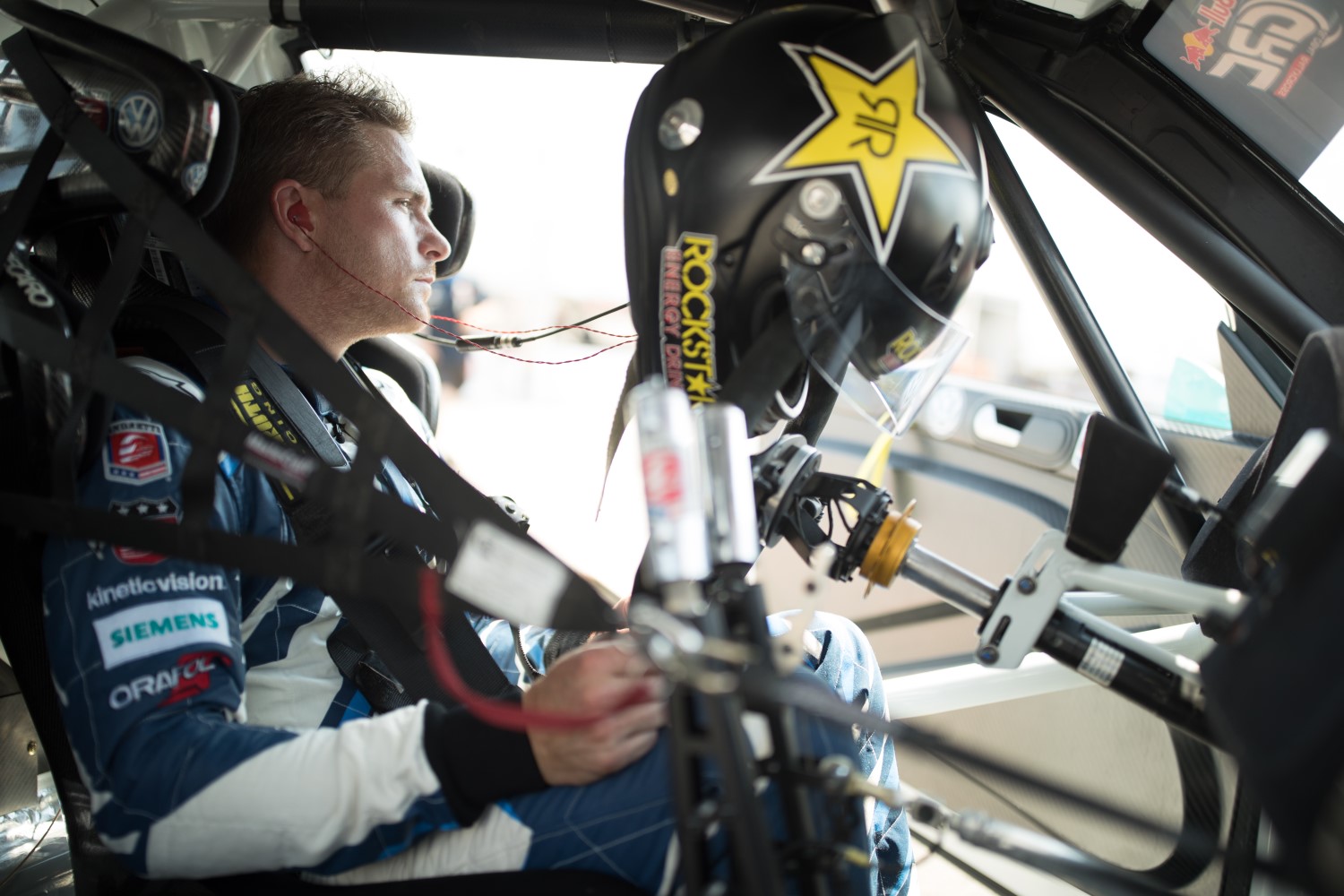 The 2016 Red Bull Global Rallycross Championship came down to the wire between Volkswagen Andretti Rallycross teammates Scott Speed and Tanner Foust. After the dust settled, Speed stood atop the podium, taking his second consecutive Red Bull GRC crown by a narrow six-point margin over his teammate, joining Foust as a multiple-time series champion. We caught up with Speed a few weeks after his big win to ask him about his second championship and what he's been up to in the offseason so far:

Two Red Bull Global Rallycross Championships in a row! How do you feel?

I'm pretty done celebrating or talking about it, to be honest. I am the type of guy who looks forward to developing the car in the offseason. It's what I look forward to most every year–making our team's cars faster, making them better. Getting to race and win championships is a nice thing, but I enjoy putting in the time to testing and improving the cars. Actually, right now I'm in a bit of a post-season depression waiting for things to get going again.

What in particular are you looking forward to working on?

There are a number of changes we need to make to our car. When you run a car for a season, you kind of learn the ins and outs of it. Our first year with the Beetle GRC in 2015, we were mostly just trying to figure out how to make it run. This year was much more competitive. It was more difficult, but we made some improvements over the first offseason. Now we've got this season under our belts and we know exactly the issues we face with our car every race weekend. We always kind of fight the same fundamental issues, so this offseason we now have the time to try to make changes to make those things go away. From a driving standpoint, we both typically complain about the same issue with the race cars. We know very specifically now what we'd like to do to make the car perform better and that's our task in the offseason. There's no guarantee that we'll be able to address those issues, but we've got some very smart engineers in Indianapolis and Germany that are going to try to work on those. That's the fun part. That's what kind of gets me giddy. I love working with those guys, trying to make the car do something it's currently not doing.

[adinserter name="GOOGLE AD"]During the season, it's very easy to gauge where you stand against your competitors, but in the offseason, you're kind of working in a vacuum.

It's like all the kids got a project from the teacher and they went home to do it. You work your butt off on your project and you don't know how you did till you see what everyone else came up with when you get back to school. The first race of the year, that first qualifying session is always when you get to find out. Right now, we've just started. We've got our homework and now we're headed back home to work on it. Hopefully we do a better job than everybody else because everyone's going to get better. You just hope that you overachieve.

Even though things worked out for you in the end, this season was far from easy. You started a little on the back foot and had to fight your way back up to the top of the standings.

For one, we had some bad luck, but most importantly, we just did a better job than everybody else. Our car is great, but that's not to say that it couldn't be even better. There are many times where we weren't the fastest car during the weekend, but at the end of the event, it doesn't seem that way. We're winning all these Heats, Semifinals, and Finals because we make fewer mistakes and we manage the weekend better than the others. In the offseason, we get to work on our car to make our lives easier next year. We get to work on the piece of equipment that we bring to the track, and I think that there's lots of room to make it better. That's evident where, like in LA, other cars qualified faster than us. If they can do one lap faster than us, it's possible for them to do all of the laps quicker. That shows that their piece of equipment is good and they are finding improvements as well. Once the season starts, we'll get back into the mode of managing the weekends and doing a professional job, which is what we've done since day one really, really well. This offseason is the chance to make our car even faster. If we can do that, it will be a job well done, and that will make the offseason a success.

You may not dwell on your championship wins in the offseason, but that is the focus when you're racing, right?

Always. I mean, you are and you aren't. You can't necessarily try harder. There's not much you can do to help your championship. You just need to make the right decisions when they come about. You need to be smart on the racetrack and during the week and that almost happens automatically. It's just part of being a good racing driver. All I can do is drive. There are a lot of things outside of your control, when you're only one of the 12 cars out on track, so you try to do your own car. I think we did a good job of that this year. From my car's standpoint, my crew guys–we had a lot of adversity through the year, and I think we handled it super well, which once next year gets rolling, we'll get back in that zone. Right now it's definitely a different chapter, and until we can start to test with the car, and do the things we want to do this offseason, it's just kind of a big waiting game.

The championship was incredibly close this year. A key to success was maximizing your points scoring opportunities and minimizing mistakes.

It's something that both of us did really well this year. Tanner and I both drove championship-winning seasons, no question about it. We both made very few mistakes out there and both maximized what our cars were doing. We set the bar pretty high for next year because we both ran this year very well.

You've been racing for a long time, but it's been years since you've been in a position to win races consistently and challenge for championships. How does it feel to have that opportunity again?

It's awesome. All my friends are jealous. I have a lot of friends that are extremely talented race car drivers that make a living racing, but they're not all in cars that can win. That's kind of the give and take of our sport. It's very rare that you find yourself in a position to make a living driving race cars and even rarer that the race car you get to drive is capable of winning. When you're in those moments, you have to appreciate them, which I very much do. I feel very lucky to be in the position I am with Volkswagen to be able to drive such a great machine. I'm glad that we've been able to take advantage of that over the past two years.

Is there anything you're doing during the offseason to keep busy?

I'm trying to rally all the troops to get in shape this offseason. Throughout my life I've done my fair share of training and I've learned a lot about it. In the middle of this season, I decided to take a break from five years of not doing any training whatsoever and start up again, and I've really enjoyed it. It's been a lot of fun. I'm a very goal oriented human being, so I have to do some kind of racing, and for me this offseason, that's going to be a triathlon in December. It's very easy for me to fill my time with unproductive things–I do play a lot of video games, so the triathlon thing is just a good way for me to spend my time, being the competitor that I am.

It's early days, but what are your expectations for next season?

I'm sure that it will be more difficult next year. Like I said, we've got a lot of work to do on our cars, and if we can do the things that need to get done and make the car perform better where it needs improvement, then next year will be great. If we can't move our development forward enough, then next year's going to be very, very hard. It's unlikely that we'll be able to maximize our opportunities and avoid mistakes like we did this year. To count on that again would be tough, so there's a lot of pressure this offseason to make improvements, which I think we can do and I'm excited to get to work on.