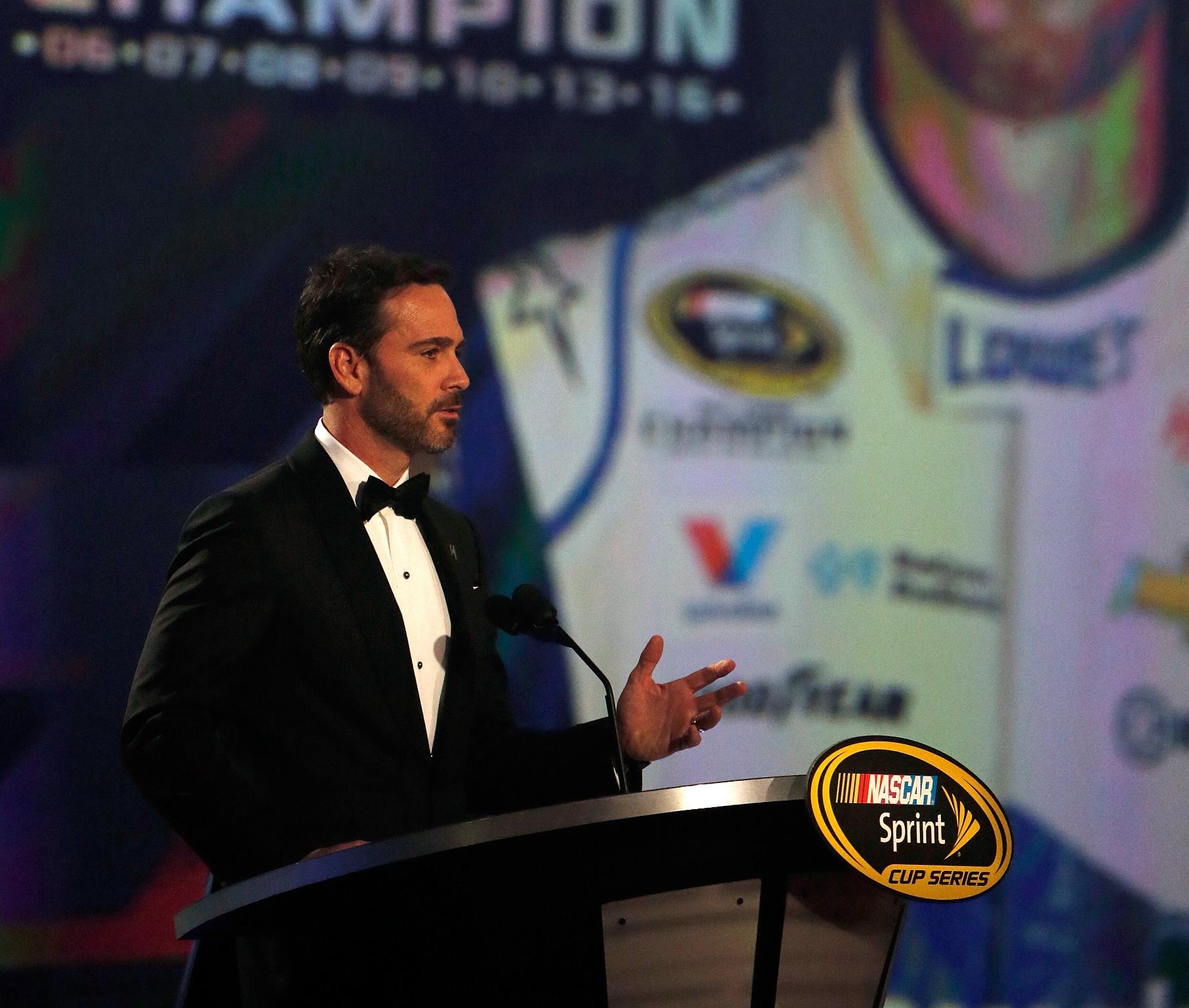 Jimmie Johnson was unfailingly humble, even on a night when the NASCAR community came together to honor his monumental accomplishment.

With a victory on Nov. 20 at Homestead-Miami Speedway, Johnson claimed his record-tying seventh NASCAR Sprint Cup Series championship. Nevertheless, the driver of the No. 48 Hendrick Motorsports Chevrolet was reluctant to claim the same stature as the two seven-time champions who preceded him – Richard Petty and Dale Earnhardt.

"Dale said this in '94 after winning his seventh," Johnson said in concluding his remarks during the Sprint Cup Awards on Friday night at the Wynn Las Vegas. "I might've won as many championships as Richard Petty, but he will always be the King."

"I completely agree and must say, I might've won as many championships as Richard Petty and Dale Earnhardt but… I will never be the King or the Intimidator. I’m just a guy from California who always wanted to race."

[adinserter name="GOOGLE AD"] But Johnson will continue to shape his own legacy, having brought a 12th series title to team owner Rick Hendrick, who also fielded championship cars for Jeff Gordon and Terry Labonte.

As he addressed the packed house in the Latour ballroom, Johnson said the magnitude of the seventh title was still sinking in.

"Loyalty and a never-quit attitude are at the foundation of our success," Johnson said. "Add that with Mr. Hendrick's leadership and the unwavering support from (sponsor) Lowe's, and put it all in a Chevy… good stuff happens.

"We've been through a lot over the years. Ups and downs, winning and losing, heartache and heartbreak. Even a golf cart incident (a reference to Johnson’s fall from the roof of a golf cart after his first championship in 2006).

"Amongst it all, we are still together and more unified than ever."

Hendrick also was an integral part of an unexpected honor for three-time champion Tony Stewart, who is retiring from NASCAR Sprint Cup competition after 18 years. Pearl Jam lead singer Eddie Vedder, who befriended Stewart earlier this year, introduced the driver, and Hendrick added a surprise.

Hendrick announced a $1.8-million donation from the motorsports industry in Stewart’s name to Vedder’s effort to combat EB, a pernicious skin disease.

Stewart said he got involved with Vedder’s charity, "when I met him earlier this year is South Carolina. It’s a very important charity to him and his wife. When you meet people like him that are that passionate about something, it immediately makes you want to be that passionate as well. That’s why we got involved."

"Tony’s legacy on the track is known and respected, but his efforts off the track should be known as well, even though he’ll never be the one talking about them," said NASCAR Vice Chairman Mike Helton.

[adinserter name="GOOGLE AD"] "Tony Stewart is a true humanitarian, and this sport is better off, thanks to him and all of his contributions. It’s only appropriate that we, as an industry, can contribute to Tony’s philanthropic endeavors."

For his part, Hendrick also had strong words for his seven-time champion driver and his crew chief, Chad Knaus.

"Jimmie, you are a champion in every sense of the word," Hendrick said. "Chad, you are what your record says you are, the best crew chief of all time."

Even Johnson’s fiercest competitors expressed deep admiration for his accomplishments.

"If I had to finish second to someone, I guess the third seven-time champion in our sport’s history is acceptable," said Joey Logano, who finished second to Johnson in the final standings. "Congrats to Jimmie, and thank you for always being a great representative for the sport.

"Great to finally see you guys make it up here on the big stage," quipped 2015 champion Kyle Busch. "But seriously, when you tie a record set by Richard Petty and Dale Earnhardt, the accomplishment pretty much speaks for itself."

Despite missing half the NASCAR Sprint Cup season because of a concussion, Dale Earnhardt Jr. was named the series’ most popular driver for the 14th straight year.

Earnhardt will test in December and expects to be back in the No. 88 Chevrolet for the season-opening Daytona 500 in February.