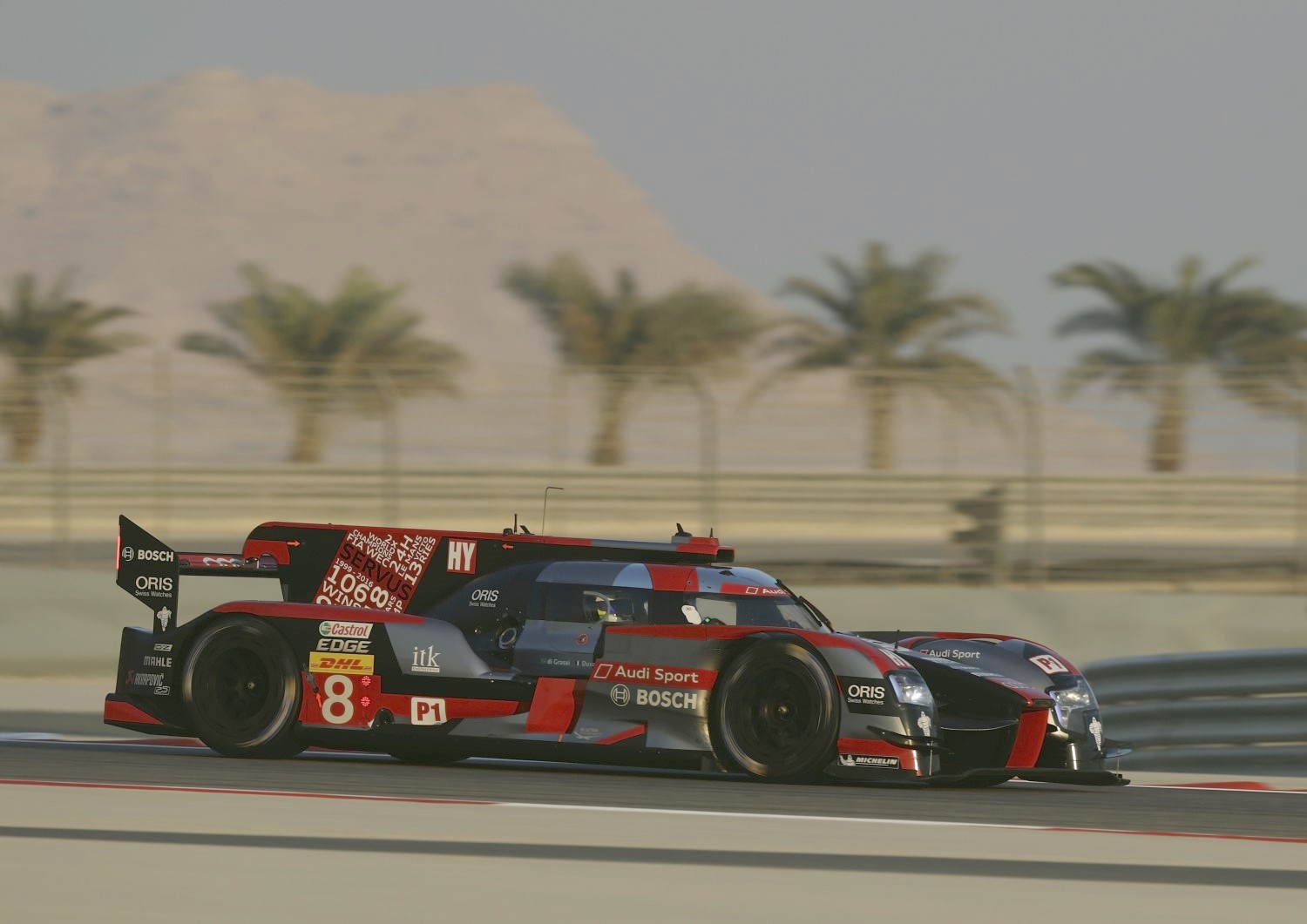 Audi came out of an emotional roller coaster stronger in Bahrain on Friday. The number 8 Audi R18 secured the top spot on the grid in the FIA World Endurance Championship (WEC) finale, in spite of an engine change required for safety reasons directly before qualifying. Now having achieved six best times in nine qualifying sessions, the premium brand clearly dominated these statistics in the 2016 season.

Lucas di Grassi, having set a lap time of 1m 38.828s, celebrated a new record – being clocked 0.842 seconds faster than Timo Bernhard last year and 0.511 faster than his quickest rival this weekend – who, again, was Timo Bernhard.

"I'm absolutely happy. This track record in qualifying is amazing," said di Grassi. "My teammate Oliver Jarvis delivered the basis for our result by the good time he set." For the Briton, this means a premiere. For the first time in his sports car career, Jarvis clinched a pole position with Audi.

"The Audi R18 was fantastic to drive. I was able to give my all – on just a single set of tires," said Jarvis.

Head of Audi Motorsport Dr. Wolfgang Ullrich was happy about the performance of his squad: "Our team did a superb job, perfectly managed the engine change and prepared a car for our drivers in which they were more than two tenths faster than our best rival. Thank you for this team performance."

While the fastest Audi achieved an advantage of 0.264 seconds on the averaged two best laps, the sister car, number 7, set the fourth-best time. André Lotterer (D) and Marcel Fassler (CH) were short 0.491 seconds of their teammates' result.

"I'm not completely happy today," said the German. "On both outings, I made a braking mistake on entering turn one. But I'm confident for Saturday because we have a good car over the distance."

[adinserter name="GOOGLE AD"]Marcel Fassler, who together with Lotterer had clinched three pole positions this year, was unhappy with his performance as well: "My car felt good, but I simply didn't manage a perfect lap."

For Audi, this marked the 81st pole position in total since the beginning of the LMP program in 1999, and the 16th best time in qualifying on 41 FIA WEC weekends since 2012.

"Congratulations to the squad on this tremendous final performance," said Stefan Dreyer, Head of LMP at Audi Sport. "We've laid a solid foundation for showing everything once again in our final LMP race.

The 6 Hours of Bahrain will start on Saturday at 16:00 local time (14:00 CET). Eurosport is going to offer free video live streaming of the entire race on its German website and will show the final stage (17:00–20:00 CET) live on Eurosport 1. Audi is keeping its fans up to speed on Facebook (AudiSport) and Twitter (@audisport).

Toyota will start fifth and sixth as the No.6 TS 050 HYBRID heads the No.5 car

The No.97 Aston Martin driven by Darren Turner and late replacement Jonny Adam took their first pole of season to head an Aston Martin 1-2 in LMGTE Pro

The GT Manufacturers' title fight comes down to 9 points as Aston Martin reduced the gap to Ferrari with one pole point.

All times from qualifying can be found HERE. Tomorrow's 9th and final round of the 2016 FIA WEC season will be the Bapco 6 Hours of Bahrain, starting at 16h00 local time and running into the night.