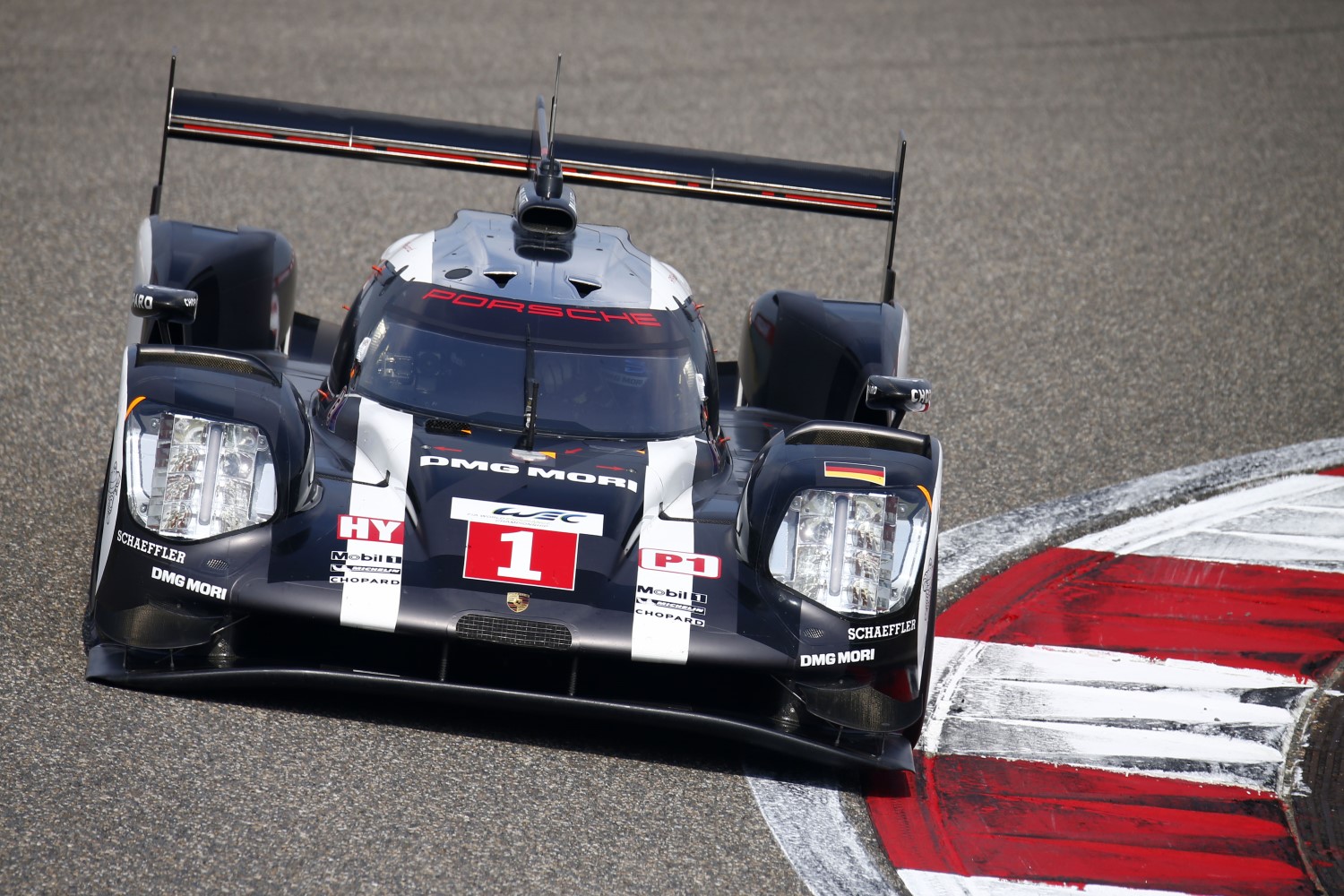 The reigning world champions, Timo Bernhard (DE), Brendon Hartley (NZ) and Mark Webber (AU), took pole position for the eighth and penultimate round of the FIA World Endurance Championship (WEC) in Shanghai. Today's pole is the third one this season for the Porsche 919 Hybrid, the around 900 HP strong hybrid racing car also started from P1 in Spa and in Le Mans.

Since its debut in 2014, the 919 now has 15 quickest times in qualifying to its tally, and eight of these were achieved by Bernhard/Hartley/Webber.

Toyota Gazoo Racing earned a front-row starting position for the 6 Hours of Shanghai as the #5 TS050 HYBRID of Anthony Davidson, Sebastien Buemi and Kazuki Nakajima qualified second, just 0.060secs behind the pole position-winning Porsche #1 in a session which saw the top six separated by only 0.589secs.

Stephane Sarrazin, Mike Conway and Kamui Kobayashi were also in the fight for pole, and the one point which goes with it. The #6 crew, second in the drivers' World Championship, will start Sunday's race from fourth.

Although Audi will be starting from positions three and five in round eight of the FIA World Endurance Championship (WEC) at Shanghai the brand with the four rings, having set five fastest times to date, has remained the best manufacturer in qualifying this year.

[adinserter name="GOOGLE AD"]Following four consecutive pole positions, Audi, at Shanghai, had to admit defeat in the battle for the top spots on the grid for the first time since June. However, performance alone was not the crucial factor, lack of fortune having played a part in the outcome as well. "Loic Duval was forced to overtake a rival in an unfavorable section which cost him valuable time," said Head of Audi Motorsport Dr. Wolfgang Ullrich. "That's why we're a little disappointed. It's positive that both driver squads are happy with the balance of their race cars. This is the thing that will matter tomorrow."

On his best lap, Oliver Jarvis was only lacking 113 thousandths of a second from the fastest time in the field. "Position one would have been possible today if Loic had caught a clear lap," said the Briton. "That I got into the car again at the end and set a better time than at the beginning, was the right decision because every tenth matters here." In spite of his lack of fortune, Loic Duval assessed the session positively: "Obviously, it was a shame that I was slowed by a car in front of me, but we know that our car is good and that quite a bit should be possible in the race." In the aggregated average, the number 8 Audi R18 trailed the best time in qualifying by 148 thousandths.

Manor took its first pole in LMP2 as young guns Alex Lynn and Matt Rao set a time of 1m54.225s.

Signatech Alpine will start second as they look to secure class title, edging out No.30 ESM entry of WEC newcomers Galael/Blomqvist by 0.016s!

The Ford GTs locked-out the front row in GT-Pro as Priaulx and Tincknell took their first pole of the season for the No.67 Ford Chip Ganassi UK with an average of 2m01.391s

The No.66 Ford of Olivier Pla and Stefan Mucke were second just 0.137s off their stablemates making it second consecutive Ford front-row qualifying lock out

Championship points leader Marco Sorensen and Nicki Thiim line up third on grid in No.95 Aston Martin ahead of quickest of AF Corse Ferraris, No.51 of Bruni/Calado.

Paul Dalla Lana and Pedro Lamy combined to take the LMGTE Am pole position, their fifth of the season and third in a row.

Class leaders Collard/Perrodo in the No.83 AF Corse Ferrari 458 Italia combined for second in class, ahead of No.88 Abu-Dhabi Proton Racing Porsche 911 RSR.

Porsche Quotes after qualifying:
Fritz Enzinger, Vice President LMP1: "To be back on pole position really feels nice and lets us look optimistic for the race. The weather conditions should stay nice and friendly. Tomorrow we want to secure the manufacturers' world championship title and get more points for our number 2 car to also bring it closer to the drivers' world championship title."

Andreas Seidl, Team Principal: "This was a good team performance and it is a rewarding feeling to start from pole position again. We knew from free practice that we would be fast on a single lap. Brendon and Mark responded perfectly to it. Sixth position for our number 2 car is not exactly what we expected, but we are convinced that we will have two fast race cars on the grid tomorrow. Today we saw a close fight between the three brands, and we think this will be the case for tomorrow's six hour race as well."

Drivers Porsche 919 Hybrid number 1
Brendon Hartley (26, New Zealand): "It all started pretty well. I went P1 on the first lap, but ran wide in the last corner, which resulted in the lap time being deleted. Mark did a mega lap to put us back into contention, and the pressure was back on for my final attempt. Awesome team effort to get the pole. Over the whole weekend we worked pretty hard on the car for the long runs. We feel pretty good for tomorrow, it will be a tight battle again."

Mark Webber (40, Australia): "It was a really tight fight for pole position today and it is great we made it. Brendon did a really good job and our average time in the end is very strong. It seems the Toyota had a little bit of traffic on the last lap, so perhaps we have been a bit fortunate. However, we took a point away from the competition and this helps the sister car in its fight for the drivers' title."

Drivers Porsche 919 Hybrid number 2
Neel Jani (32, Switzerland): "Preparation for qualifying was not that easy for us, but I had the feeling the car had a proper grip level for the first time here and felt good. Of course it is a shame that we went down from provisional P1 to P6 on the grid, but we will make the best out of it in tomorrow's race."

Marc Lieb (36, Germany): "My first lap was cancelled, but it wasn't good anyway. After Neel did his run I jumped back into the car and on my second lap unfortunately made two mistakes. Given how tight the competition is here, you cannot afford to do that. This is obviously disappointing, as the car had the potential to be right up the front."

Sebastien Buemi: "It is great to be so competitive today, especially as qualifying is not normally our strong point. It’s a little bit a pity that I got caught behind an LMP2 car at the last corner; maybe without that we could have been on pole. But overall today’s performance is really good for the team. Now we look forward to the race and I am feeling optimistic; we hope to fight for the victory."

Kazuki Nakajima: "We had quite a difficult time in free practice but, working together with the sister car, we improved the set-up and I was happy with the car in qualifying. Race balance is of course different to qualifying so we will work hard to extract the best performance on Sunday. I am quite hopeful for the race as we are on a similar pace to the others. The key will be consistency."

Stephane Sarrazin: "Our position could have been better; I think our car performance deserved more than fourth place. Mike had some traffic and could have gone quicker in his last lap. But the most important thing is that we are quick because when we are fast in qualifying we are usually really competitive in the race. That is the target because we want to challenge for the win here."

Mike Conway: "It looked like the track was getting quicker during the session so I went out at the end to try to improve. But I had some traffic in turns one and two which really messed things up so I’m a bit disappointed not to get more out of it. The great lap from the sister car at the end shows that we could have a strong race tomorrow. It looks like it will be another exciting day."