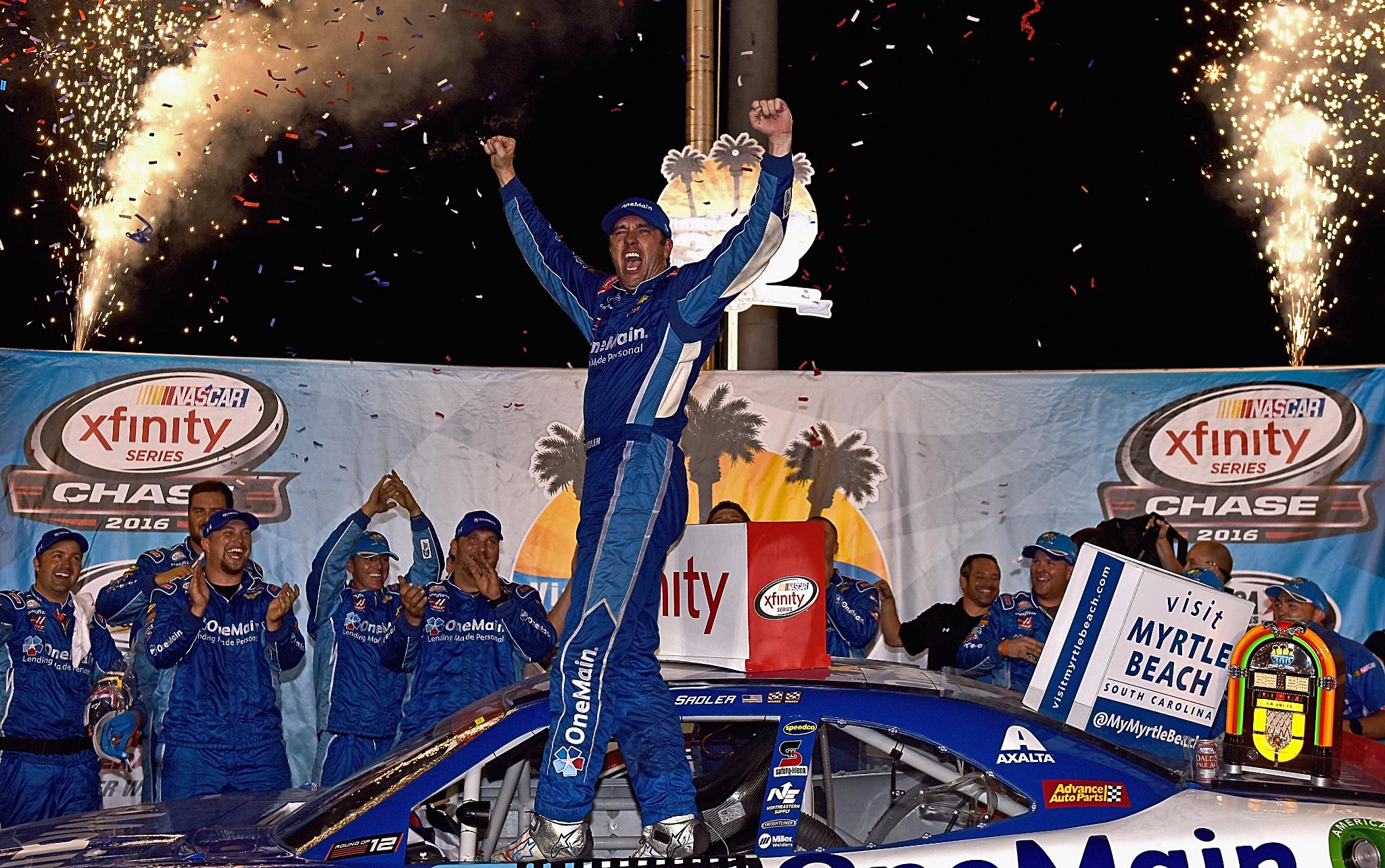 A huge push from Daniel Suarez on a restart with four laps to go in Saturday night's eventful VisitMyrtleBeach.com 300 sent Elliott Sadler ahead of Ryan Blaney to win the opening race of the NASCAR XFINITY Series Chase at Kentucky Speedway.

Sadler's third win of the season and 13th of his XFINITY Series career was about more than just stamping his way into Round 2 of the Chase. The Emporia, Virginia, native fought for the win while thinking of his mother, Bell, who was released from the hospital Saturday, after a week of hospitalization and two surgeries.

"We fought through a lot tonight," said Sadler in Victory Lane. "I'm going to get a little emotional on you, I've been in the hospital all week with my mom in ICU watching her fight and fight through a lot of pain and suffering. (She) made her way back home tonight to watch the race. Mom I love you. She leads so much by example."

Sadler also credited his team, who helped Sadler battle from outside the top 15 earlier in the race.

"These guys are my heroes," Sadler said. "We had a 10th or 15th place car at best. Still had to come in and really take our time and work on it. Great pit calls by Kevin (Meendering, crew chief) and the guys to get us in position. Got a good push there at the end. I do want to say thanks to Josh Berry for helping me a ton tonight. That kid did some cool things on the restarts. This OneMain Financial team has no quit in them. We just fight till the end. This is a great way to start the Chase."

Suarez, who finished second, said he struggled with a tight condition all night but was best at the end of the race.

"Right at the end, we were pretty good, maybe just a little tight but we were strong," he said. "I feel like we were the fastest car out there at the end. I just needed one or two laps more to get the win."

[adinserter name="GOOGLE AD"] The inaugural XFINITY Series Chase race offered plenty of excitement and drama. With the "win and advance" format putting an even greater premium on victories, drivers found themselves on the edge of control at a track where the racing groove was extremely tight since undergoing a repave in May.

"At halfway, we were running 20th," added Sadler. "By my calculations, we were probably 10th or 11th in points, so to fight back that last 100 laps to gain that kind of momentum probably means a lot for us and these guys. I'm so proud of these guys. Dale (Earnhardt Jr., team owner) and Kelley (Earnhardt-Miller, team manager) and all of our partners for Hunt Bros., and Chevrolet and everyone that does so much for us at JR Motorsports. This is a great way to start off the Chase and keeps the momentum on our side, we can relax and go to Dover and have fun there and Charlotte and get ready for the second round."

XFINITY Chase drivers Ty Dillon, Brandon Jones and Erik Jones all found themselves in a deep hole after being collected in accidents throughout a caution-filled race. Dillon and Erik Jones tangled while racing for second with 12 laps remaining. The event was red-flagged for five minutes, 34 seconds for cleanup of the Turn 3 incident.

Jones, the pole sitter who led a race-high 100 laps, took responsibility for the crash.

"I just got sucked around," Jones said after the incident. "I tried to slow down but Ty was holding me down there pretty tight on the restart, slamming doors through (Turns) 1 and 2. It was my fault but it's a pretty tough aero situation to be in.

"I just couldn't hang on to it. I tried to slow down but he kept slamming down on my door and I did all I could to hang on to it. It definitely looks like we're going to have to run really well at Dover and Charlotte or even win."

Behind Sadler and Suarez, Sprint Cup rookie Ryan Blaney finished third while Sam Hornish Jr. and Matt Tifft completed the top-five. Tifft, a NASCAR Next alumnus made his XFINITY Series return after undergoing brain surgery in July to remove a remove a benign low-grade glioma.