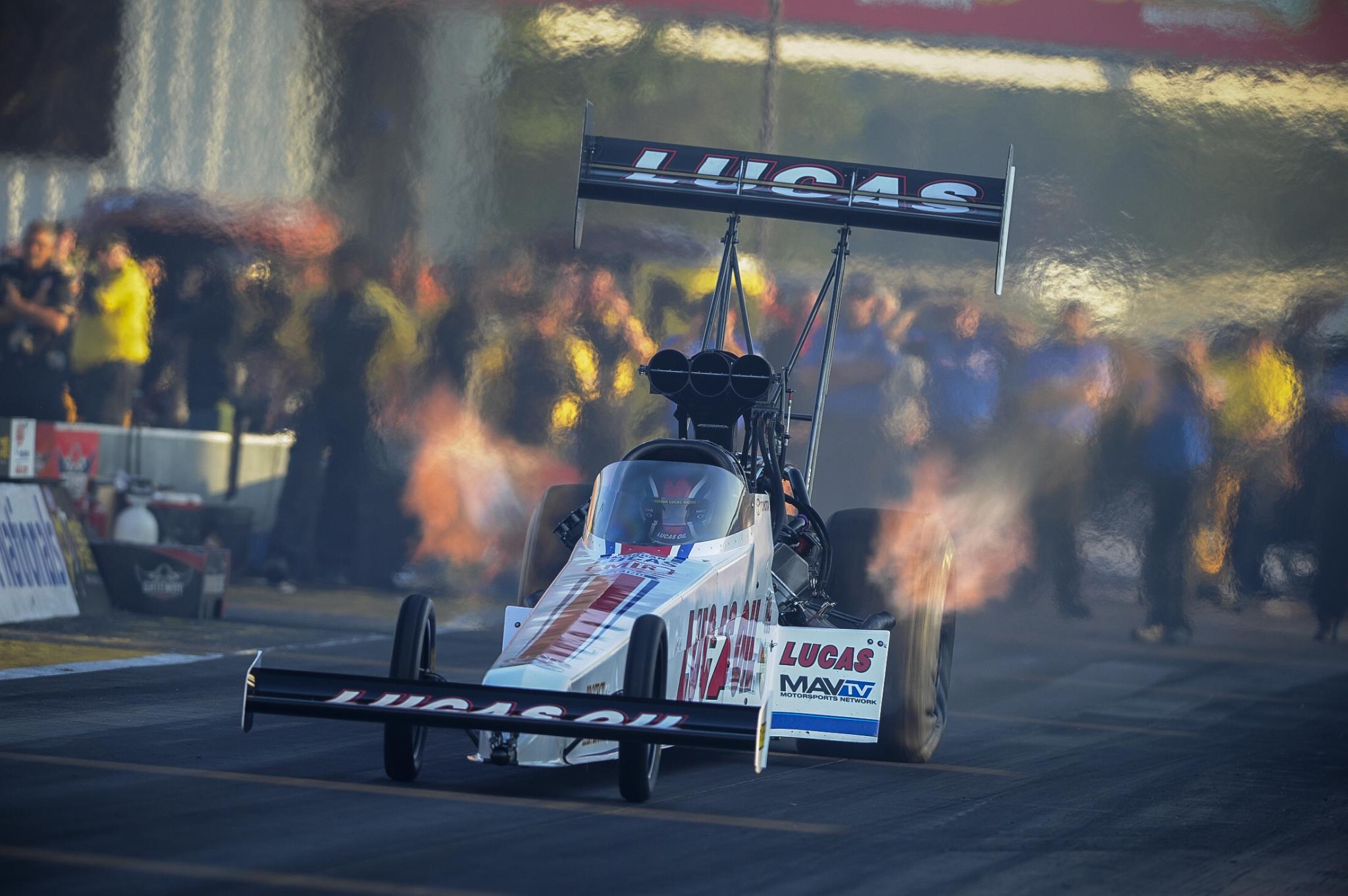 Richie Crampton powered to the No. 1 qualifier in Top Fuel Saturday at the AAA Insurance NHRA Midwest Nationals at Gateway Motorsports Park just outside of St. Louis.

Crampton used his Friday night performance of 3.733-seconds at 323.50 mph to earn his second No. 1 qualifier of the season and fifth of his career. Crampton, from Adelaide, South Australia, posted a runner-up finish earlier this year in Sonoma, Calif., but has not yet won an event in 2016. He will look to improve on his 10th place points standing as he opens eliminations against Kebin Kinsley Sunday morning.

"We were trying to get down the racetrack today and it just didn't work out, but to get a good run on the board Friday night is really important," said Crampton, a seven-time event winner. "It was a good run yesterday and I'm sure we left a little bit on the table today. We were just a little underpowered today in both sessions and maybe just treaded a little bit too lightly."

In Funny Car, Hight also used his Friday night performance to head into Sunday's eliminations as the category's No. 1 qualifier. Hight's 3.893 at 328.38 during Friday's second session was enough to earn him his first top qualifier of the season and 48th of his career. The Gainesville, Fla., event winner will go up against John Hale to open eliminations.

"Saturday is more condusive to what you're going to race in on Sunday," said Hight. "Basically, three of the four runs we were low-E.T. and that gives you a lot of confidence. That third run, we were still pushing hard. Sometimes it's nice to know your limit so you don't find that limit on Sunday. It's been a great weekend and I'm excited about tomorrow. I'm more excited about tomorrow's race-day than I have been in a long time."

Jack Beckman qualified second with a 3.907 at 325.22. Points leader Ron Capps is third with a 3.910 at 322.81. Tim Wilkerson is fourth and will meet Brian Stewart while Matt Hagan is fifth and paired with Cruz Pedregon.

Shane Gray earned his second No. 1 qualifier of the season in Pro Stock with a 6.604 at 209.42. Gray, who raced to the top spot in Chicago, has seven No. 1 qualifiers in his career and is seventh in points. He will race David River in the opening round of Sunday's eliminations.

"I'm real confident with the car for tomorrow," said Gray, who has never won at St. Louis. "The way I see it now is the only person that can screw this up is me. We've got a good car and it's making good runs. We'll see what tomorrow brings."

In Pro Stock Motorcycle, Krawiec rode to a 6.819 at 197.02 to earn his sixth No. 1 qualifier of the season and 33rd of his career. The two-time St. Louis winner and three-time world champion is currently fourth in points after a first round loss last weekend in Charlotte. He will open eliminations against Joe DeSantis.

"We didn't think we were going to run that number but we were picking away at it a little bit at a time," said Krawiec, who has two career top qualifiers at Gateway Motorsports Park. "This last session, it was drying out a little more. That definitely helped aspirate the motorcycle. We didn't think it was going to run that fast, but all the stars aligned. We know we have a great motorcycle, it's just up to us to tune it right and it's easier said than done."

Angelle Sampey qualified second with a 6.831 at 197.02. Charlotte winner Chip Ellis is slotted third with a 6.850 at 196.53 followed by Jerry Savoie in fourth and Matt Smith fifth.

Eliminations for the AAA Insurance NHRA Midwest Nationals at Gateway Motorsports Park are set to being at 11 a.m. on Sunday.