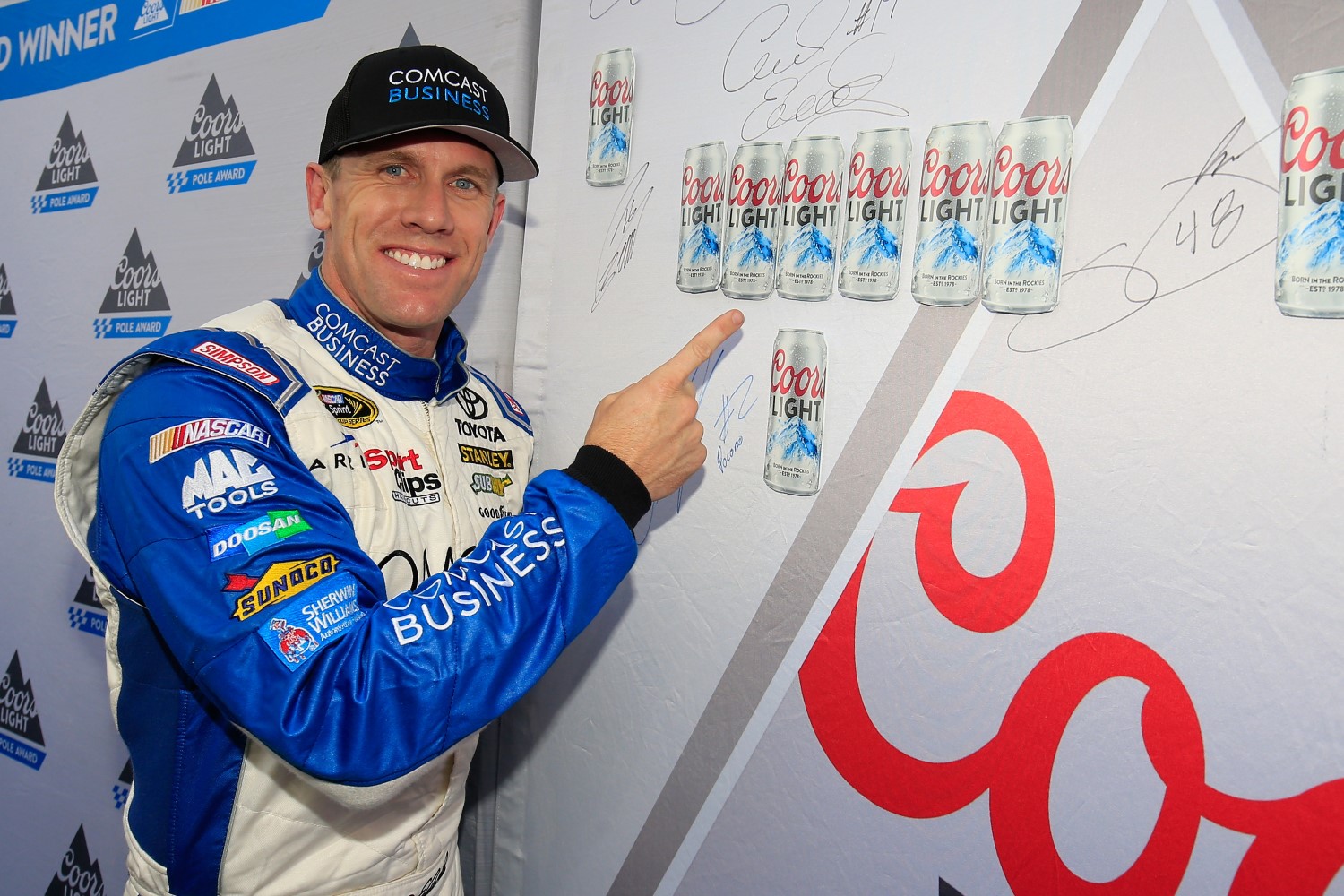 This is Edwards' third pole in the last four races at New Hampshire and his sixth of 2016.

Martin Truex Jr., the Sprint Cup Series points leader, will start second in his No. 78 Furniture Row Racing Toyota after his final-round lap of 135.212 mph.

Ten cars did not make it through inspection before qualifying began at 4:45 p.m. ET. Among the drivers delayed were Chase drivers Kevin Harvick (P19), Austin Dillon (P29) and Tony Stewart (P22).

Clint Bowyer spun about eight minutes after the start of qualifying, bringing out the red flag — which helped the cars that were waiting to clear inspection. He will start 37th.

All were able to get on the track before the first round ended, but Dillon and fellow Chase driver Chris Buescher (P28) did not advance past the first round.

What would it mean to you to win at New Hampshire Motor Speedway this weekend?

"That'd be great. It did not – things didn't start the way we wanted them to at Chicagoland Speedway, so we come here to a track that we've had a lot of speed at lately. It's Dave Rogers' (crew chief) home track. His father is here. He said he's got some friends and family coming, so it'd be a really great place to get a victory and then we'll head to Dover, another good track for us, so we feel pretty good."

"It's very difficult. If you look at a track map or a satellite view, it's about the most-straightforward track we go to. It's a true oval, it's a mile, it's pretty flat and that's what makes it so tough. Everyone can get around here really well. It's that last little bit. Trying to figure out how to pass people is very hard here – your car has to be very good. It's just deceivingly tough. I mean, it really – you can go pretty good, but that one last bit is hard. We were just – I just lived it there in qualifying trim. Had one set of laps that was really fast, make a couple of little mistakes and the next set is really slow, so it's tough."

Why has Matt Kenseth become so strong at New Hampshire?

"Matt (Kenseth) is – I went bicycling with Matt last week and I say he's somehow figured out how to age backwards now. He's getting faster, he's getting stronger, he's figured something out here for sure and it gives guys like me hope, you know? You go to these places and hope that you figure something out, but really I think it – seriously, I think it's our team, you know? The JGR (Joe Gibbs Racing) Toyotas are very good – the cars are good. Our teammates – Matt and I's teammates, Kyle (Busch) and Denny (Hamlin) – are very good here and all that stuff adds up to more speed."

Is this when the Chase ramps up?

"Right, yeah. Chicago was frustrating and I was real upset about it for about a day. If we have a bad day here, I'm going to be real upset about it for about three or four days and then if you have a bad day at Dover, you're going to be upset for the rest of the year. It's tough, but this format allows you to hang on to the idea of going out and winning and each of us have different strengths at different race tracks. We feel like we can run really well here, but we're certain we can go to victory lane at Dover, so you just stay in there and dig and had some really neat meetings. Dave Rogers – I got the chance – we've never been through this before and all though Chicago was tough, we sat down on Monday and his spirit and the way he wants to go compete, I mean that guy never gives up, so it's pretty exciting to come racing with him."

Is Dover International Speedway one of those tracks that can be very difficult in the Chase if you need a good finish?

"Yeah, I've always felt like Dover was pretty straightforward. We always ran pretty well there, but I got a taste of the other side of it this spring. We had a car that I felt like we were – on that last restart, we were going for the victory and things got choked up a little bit and I ran across (Kyle) Larson's hood and it went from deciding how I was going to do my back flip to finding my way to the medical center. I mean, it was not – it was over in a hurry and that can happen at Dover, so that's that."

How do you feel about the change to the LIS penalty structure?

"We actually had a meeting with Comcast Business – they have pretty robust technical abilities – they said they can make that LIS say anything they want, but we're going to just keep it fair. We're not going to implement that. We'll just stay within the rules and seriously NASCAR I think responded in the best way that they could. This is – they police this sport the way that we have asked them to police it. We want to know that we're racing other cars evenly and that nobody has an advantage, but them you get put in these situations like what happened last week where the penalties are really unequal and I think NASCAR did a good job responding to that and I feel like we're going to go through this Chase and we're going to have as far a Chase as we can and that's good."

Are you counting points?

"Man, I mean the points are obviously important. I mean, it might be what makes the difference, but I think right now you just go as hard as you can. You try to win, try to get every position you can. I didn't look at the points. I saw them on the screen there earlier, but I'm not even sure what points position we're in yet, so I guess no, not yet."

How will the low temperatures affect the race?

"I'm actually pretty excited. I got some really neat JGR (Joe Gibbs Racing) gear that I haven't been able to wear yet, so I brought out my neat jacket that I like. Really it's – I think it's going to be comfortable for the fans. It will be comfortable for the drivers. There'll be a little more grip. It looks like tomorrow will be representative of Sunday, so I don't think it will have much of an effect on the race. I think it will just be good for everybody."

How do you weight risk versus reward on approaching the LIS tolerance?

"Who actually gets three weeks vacation? Who is it? Is the car chief involved in that too or is it just the crew chief? I don't know how it works. This is an extremely competitive sport, so just like anything else you don't want to – you definitely don't want to finish the race and realize it didn't count and then give your crew chief all that time off. That's just not right, but you also don't want to finish the race second or third and realize that you weren't taking – pushing as hard as the guys that beat you, so you just go right up to the edge, but I'm pretty sure everyone will be a little bit conservative. NASCAR's put a pretty bold line in the sand there and nobody wants to test that out."

Does the proximity between the two New Hampshire races help with your planning?

"I think so a little bit. The difference is the weather now, you know? If we're racing today, it's be one thing, but that cooler weather is going to change things and plus this sport evolves so quickly. Just what we were talking about with all the games going on. I mean, everything is just – it always moves forward. It feels like a new race track every time you come somewhere even if they're close."

Do you get involved in how close the car is set to the LIS tolerances?

"No, not at all. I haven't crawled under a car for a long time. I hate to admit that, but, no, I just – we do all we can. Coach (Joe) Gibbs (team owner) is just very clear though – he doesn't ever want step out of the box. He's a competitor that likes to go compete and do it the right way and that's been made very clear and so we'll just hopefully be – hopefully we'll have a similar-type piece of hardware to race against our competitors and we'll go and the best man wins and there won't be any issues. I don't think we'll have any trouble."

Is there any jealousy when Toyota drivers are taking wins from one another?

"Oh, it's awful. I mean, we have this group text where you know when somebody does well you send them a – it's like, ‘Man, it's so frustrating they got that win and we didn't,' you know? But that's just the way it is. It's competition and I think it's very healthy to compete against one another the way we do, but also to help one another. I mean, Martin (Truex Jr.) has been amazing. You guys have seen it from the outside. From the inside, Martin has just done an amazing job. Him and Cole (Pearn, crew chief), it's been really cool to work with them. Just really humble and understated and then goes out there and just hauls the mail, so it's cool to see that."

Was your bike ride with Matt Kenseth leisurely or competitive?

"I thought it was going to be leisurely and then he (Matt Kenseth) just – it was a pretty hard ride. All these guys are working so hard, getting so fit, but, yeah, Matt truly he won't say anything about it, but he's really – I mean, he can go. He's fast, so that was fun."

How was your qualifying effort?

"It was good. We had a good qualifying run – just a good day really in general. A lot better than the last time we were here and got some momentum obviously and I thought it all went well. We had a shot at it there and just slipped a little bit in the middle of [turns] one and two and lost it – just a hair of time – but all in all a good effort."

What is your strategy for this race and round after winning in Chicagoland?

"Get another one. Get two more hopefully."