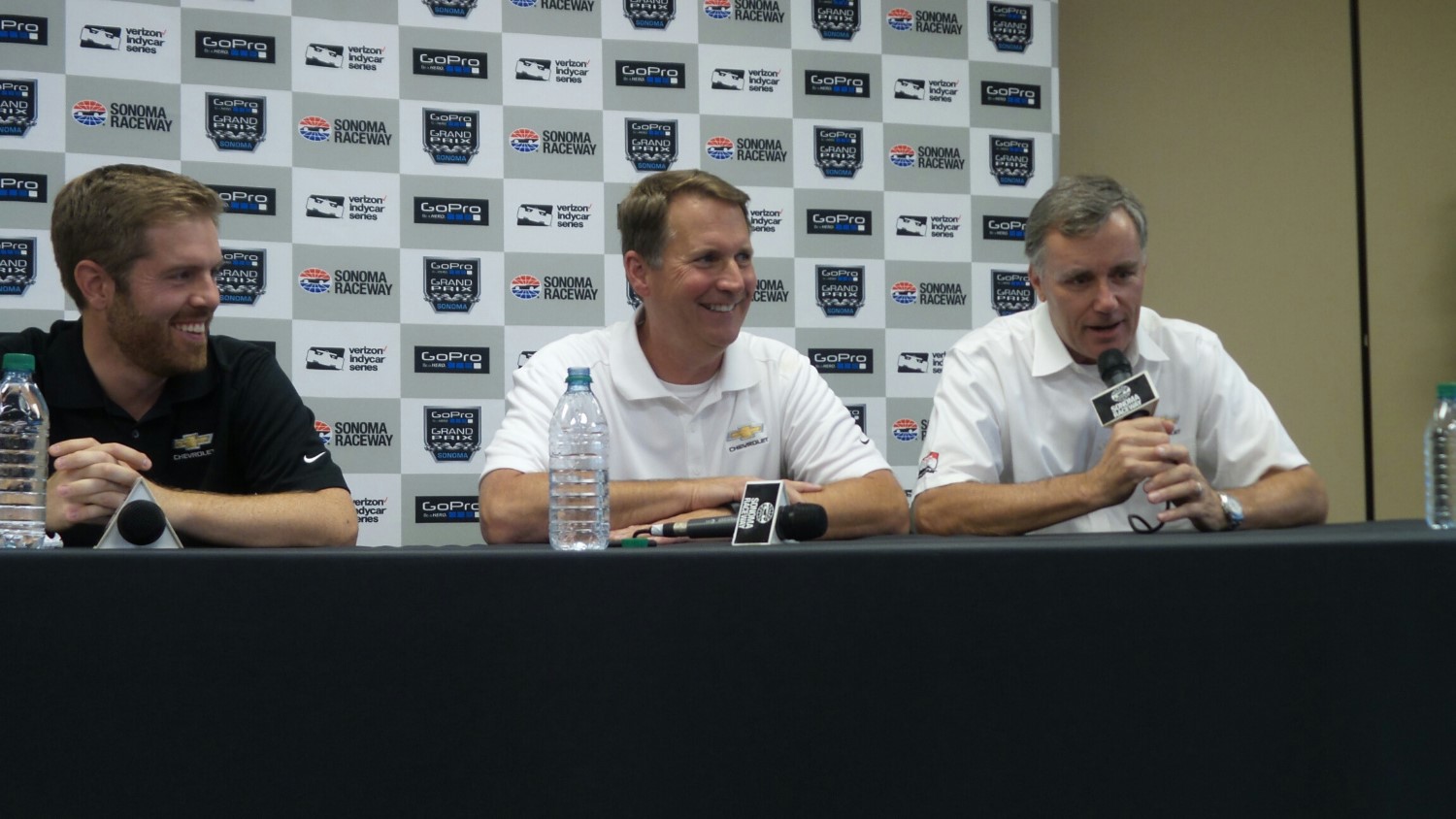 Chevrolet has won the 2016 Verizon IndyCar Series (VISC) Manufacturer Championship. It is the fifth consecutive year the Bowtie Brand has captured the title since returning to IndyCar racing in 2012.

"Thank you to our Chevrolet teams, drivers and technical partners for their dedication and commitment that resulted in a fifth consecutive Verizon IndyCar Series Manufacturer Championship" said Mark Reuss, GM Executive Vice President, Global Product Development, Purchasing and Supply Chain. “Teamwork, preparation and great execution were season-long keys to each pole, win and this accomplishment,"

In addition to the Manufacturer Championship, Team Penske driver Simon Pagenaud won the 2016 championship in the No. 22 Chevrolet. It is Pagenaud’s first title and the 14th for Roger Penske in IndyCar competition. Pagenaud amassed Â­five wins and seven poles on the way to his title.

“Congratulations to Simon Pagenaud on winning his first Verizon IndyCar Series Driver Championship," Reuss continued. “Simon, Kyle Moyer and the No. 22 team were focused and prepared to make the most of every race, and the results speak for themselves.

“This Driver Championship is another example of the strong leadership by Roger Penske. Chevrolet is proud to have Roger and Team Penske as a partner on and off the track."

"Winning Chevrolet's fifth consecutive Verizon IndyCar Series Manufacturer Championship has been a true team effort by our Chevrolet engineers, race teams and partners at Ilmor Engineering, Pratt & Miller and Hitachi," said Mark Kent, Director of Racing – Chevrolet. “The balanced performance delivered by Chevrolet’s 2.2 liter twin turbo direct injected V6 engine and Aero Kit has proven throughout the season to be the right combination for our teams to win races and ultimately, this championship."

[adinserter name="GOOGLE AD"]Since 2012, in addition to the five consecutive VISC Manufacturer Championships, Chevrolet has won drivers championships with drivers Ryan Hunter-Reay (2012), Power (2014), Dixon (2015) and Pagenaud (2016). Additionally Chevrolet has won the Indianapolis 500 with Kanaan (2013) and Montoya (2015) and a total of Â­Â­Â­57 races. Previously, Chevrolet competed in Indy-style racing as an engine manufacturer of V8 engines from 1986-93 and 2002-05, powering 111 wins, seven Indianapolis 500 wins and six driver championships.

An Interview with Mark Kent, Paul Ray and Michael Stouffer

THE MODERATOR: We're joined now by representatives from Chevrolet and Ilmor to discuss the manufacturer's championship, which they clinched this afternoon.

Michael, obviously congratulations. You're involved in the marketing of Chevrolet's business within IndyCar. The growth that you've witnessed throughout the past five years that Chevrolet has been involved in this competition, can you speak to that a little bit, just the success of the manufacturer in the series itself.

MICHAEL STOUFFER: Absolutely. We really try to apply the same mindset to this as we do on the technical side that Mark overseas. We want to win. We want to win on the track and in the showroom. We've proven that this year.

Really all of our track partners and facilities across the country gives us that kind of bed to go in and market our products, parts and accessories. We're able to bring it to an avid fan base. We see it in the numbers. They're in the market for buying. We've seen definitely an uptick within this series being successful with our teams as well.

THE MODERATOR: Mark, from your standpoint, involved in the technical part of directing the racing here in the Verizon IndyCar Series for Chevrolet, also separately for Cadillac, just your opinion on the success that Chevrolet has had in the series and capturing another manufacturer's championship.

Our goal is to give them the building blocks to be successful, including our partners at Ilmor engineering with the great 2.2 liter twin-turbo engine that they build for Chevrolet.

It's been a great season, our fifth straight manufacturer's championship, about 16 races Chevrolet won this year. A very good year of competition for Chevrolet. We're very proud of the opportunity to compete in this great series.

THE MODERATOR: Paul, the relationship that Ilmor and Chevrolet have had has had so much success with that fifth straight manufacturer's championship. I know you're still revelling in the sweetness of victory, but looking forward to next year, what do you see in the future for this partnership?

PAUL RAY: I hope a lot more of the same, maybe with more Indy 500s under our belt as well.

Our partnership has gone back very many years. When Ilmor was first formed in '84 it was in partnership with Chevrolet. We've enjoyed tremendous success together. Our team of people back in the UK, in the new engine development HQ up in Pontiac, have been working on the 2017 product for quite some time.

Whilst the rules don't allow us to change a huge amount, it doesn't mean to say that you can't keep tweaking on the bits we can change. We'll be testing engines on track as soon as we're allowed to in January with the new specifications.

All we can hope for is more of the same for next year.

Q. Paul, it's my understanding that the aero kits will be frozen for next year, which I guess we start where we left off from this rest. What about the engine? It's my understanding that during 2016, before the season started, in the off-season, there were a lot of things you could change on the engine, but not so much the year before. Going forward to next year, are you limited from your point of view going forward to 2017?
PAUL RAY: We are. In 2016 we could change cylinder heads, the valve trains. We had quite a bit of latitude to make changes. Going forward for both '17 and '18, the engine rules are quite tightly controlled. We're allowed to change valves, springs, pistons, exhaust systems and so on, but that's pretty much it in terms of the real things that we can mess with.

Most of the gains we're finding now are really coming from the sophistication of the calibration, these engines being direct injected, running on alcohol, it gives you quite a large amount of latitude to continuously improve the performance of the engine. With our partners, Hitachi, we can actually change the fuel injectors if we want to.

There's a fair amount of things you can mess with. You're not going to get the very large gains that we saw this year. We won't see those again until 2019.

Q. Michael, this has been another big year for Chevrolet on the whole. What is this like from a marketing point of view?
MICHAEL STOUFFER: All of our platforms have been pretty successful. It opens up all motorsport platforms, a lot of different tracks, a lot of different partnerships we can have. We plan to continue with those. We're actually going through our activation plans right now, what 2017 will look like.

I see a lot of the same, but hopefully we can continue to build on what we have over the last five years in this series. The Corvette program, as well, has been very successful. We're in very good shape for that program to win this year. So more of the same. Hopefully we can move forward on a positive note.

Q. We keep hearing it happens here, Watkins Glen, guys having to make a ridiculous fuel number towards the end of a run. Four and a half miles per gallon in a racecar, that's crazy. How do you translate that out to consumers to show them, We're doing this on the racetrack to make the big number at 700 horsepower, here is what you get on the street?
MARK KENT: One of the reasons Chevrolet got back into IndyCar was the engine technology because direct injection, twin turbos, small displacement V6's, those are all technologies we use in our street products.

As we were working with Ilmor to develop this new engine, we actually embedded some of our production engineers into the process that brought some of our direct injection technology and learnings to the race program and took some of Ilmor's knowledge and brought it back to the production program.

Paul mentioned Hitachi. Hitachi is not only our partner here with direct injection on racecars, but they're also our partner in production cars.

A lot of those learnings get back to our production group. Paul mentioned Pontiac, Michigan. It's co-used by our advanced engineering group for engines. A lot of learning is getting back into our street cars and our street cars today are making phenomenal fuel numbers, so…

Q. Especially about this IndyCar engine, is there any particular part in the engine program which benefits street cars, for example, turbocharge technology?
MARK KENT: All our learnings in some way make it back to the production group. I think the strongest part that gets back to the production group is the people themselves, the people that have the opportunity to work on this program, then take those learnings and go work on production programs. I think that's probably the strongest link. It's one of the reasons we race. It's to help use racing to not only sell cars and trucks, but also make the cars and trucks we sell better.

THE MODERATOR: Before we let you go, I'll ask you one more question. This was really a team effort that involved a lot of entities and players. I imagine a lot of that comes from the teams themselves and the drivers that represent you and run your equipment. What is that relationship like between a driver's feedback, a team's feedback, and yourselves? How does that assist in the success of the program itself?

PAUL RAY: I'll give this a go.

You probably all know, we take massive amounts of data from racecars every time they run. That allows us to produce various charts and graphs and so forth that we every day have the opportunity to sit with the driver and pore through the data to get the real driver feedback about what's actually happening. You can look at this stuff all day, but you never feel what the driver feels.

It's vitally important. We have an engineer that works with each driver at every race during every session, then after the session goes through the data into the evening so we can actually understand what the driver wants.

Within the calibration system, there are tremendous amounts of things that we can adjust, the way the power is delivered, the fuel economy, how the engine feels when we're in the lean modes we can reach nowadays. We're constantly making minor adjustments based on driver feedback. Then when the driver will go out, he'll try various things for us.

Again, we get that feedback and we keep refining things until we get to qualifying or ultimately we get to the race.

THE MODERATOR: Gentlemen, congratulations on your fifth consecutive manufacturer's championship. Thank you.