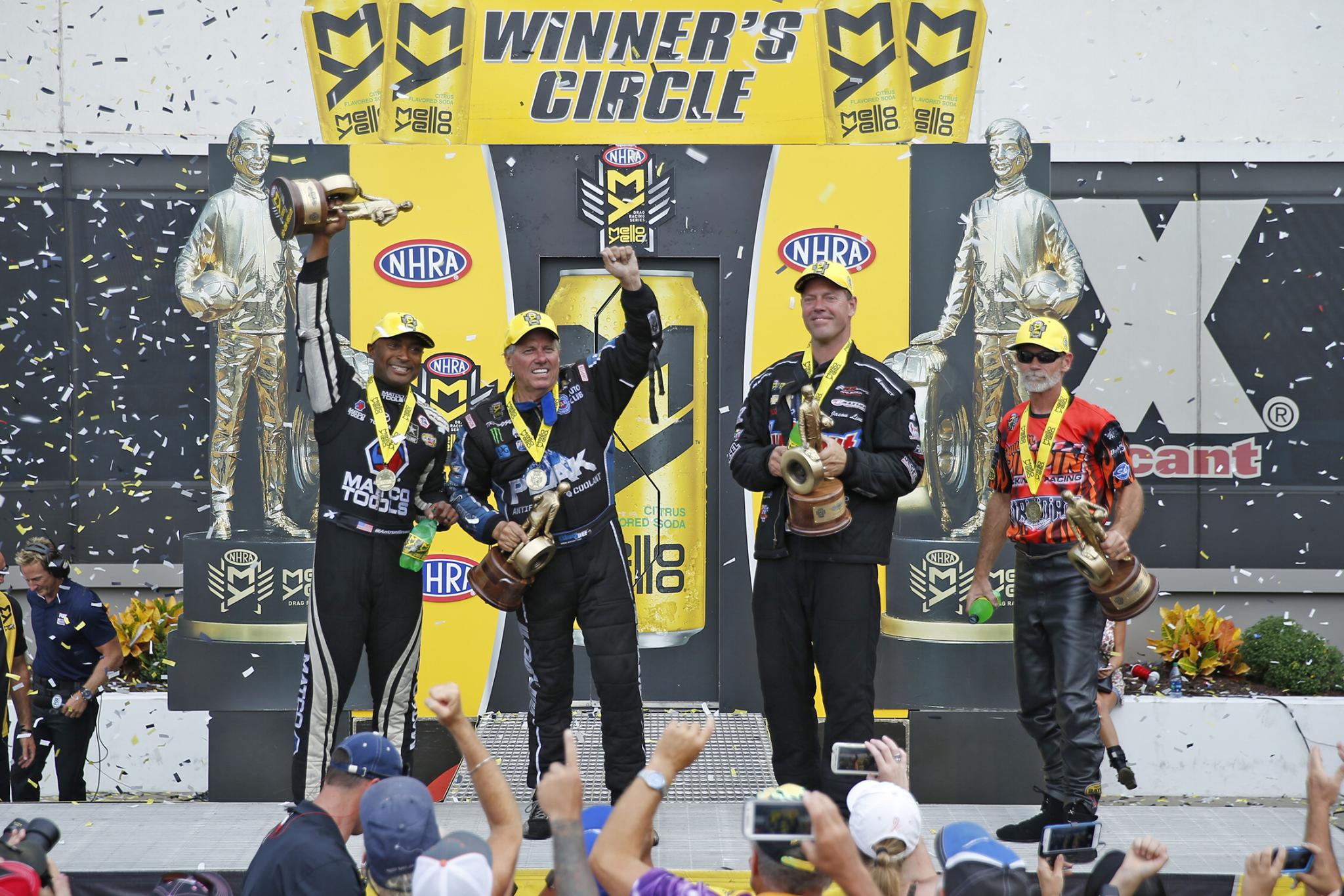 Brown powered to his series-leading fifth win of the season with a victory over top qualifier Doug Kalitta to extend his lead in the Countdown standings.

The defending race winner, Brown's road to the final round took him past Clay Millican, Brittany Force and Pat Dakin to advance to his ninth money round appearance and his seventh-career final round matchup against Kalitta.

[adinserter name="GOOGLE AD"] In the final, Kalitta had a slight advantage but Brown pulled ahead by the 100-foot mark and led the rest of the way, beating out Kalitta by half a car length at the line.

After the win, Brown and Kalitta were in the same position they were at the start of the weekend – first and second in the points standings.

"You know what we call (Doug) Kalitta – Doug just smiles and he's quiet – he's that ‘quiet sniper assassin'", said Brown, who tallied his 59th-career NHRA victory. "Every time we line up on the starting line I look over and I see that white, red and yellow car and I say ‘Oh, here comes the sniper again'.

"Doug will sneak up at you and tiptoe around you and look at you and give you a little wink to the finish line, and he's done it numerous times to me before in the final, so we owed him a couple, so it felt good to pay that favor back. But if we want to go out there and compete for a championship, we are definitely going to have to outdo that team."

The opening round of Top Fuel produced some shocking results, as part-timers Cameron Ferre, Wayne Newby and Pat Dakin knocked off Countdown competitors Tony Schumacher, Shawn Langdon and J.R. Todd respectively, with Dakin and Newby advancing all the way to the semi-finals before being eliminated by Brown and Kalitta.

Force knocked out Dave Richards, Tim Wilkerson and long-time rival Ron Capps to reach 245th-career final round and his fourth of the season. It was his first victory since bringing in Jason McCulloch to share tuning duties with veteran crew chief Jon Schaffer, and the addition paid dividends right off the bat with a victory in the first race of the Countdown.

"I have a race car now that I can race with, and when you get a race car and you're on your game I can win," said Force. "Tommy Johnson flew all weekend; he outran us but I was right in the hunt with him. (Ron) Capps in the semis, I love to race him. At the end of the day it was just a fight and we got the win, and we'll just take it from here,"

Capps retained the points lead over Del Worsham while Force moved up five spots to third in points.

In Pro Stock it was an all-KB Racing final as Jason Line took out his teammate Greg Anderson for his eighth win of the season and his second at zMax, becoming the first-ever repeat Pro Stock winner in the nine-year history of the event.

Line had entered the race as the top seed in the Pro Stock division and started the weekend topping the opening qualifying session before Anderson roared back on Saturday to take the top spot away.

On Sunday, it was Line's turn to return the favor, burning through Shane Tucker, Bo Butner and Vincent Nobile to reach the final round for the 13th time this season.

Facing each other in the finals for the ninth time this season, Line shot to the lead right off the jump with a .025 reaction time and never trailed, running a 6.621 at 209.39 seconds over Anderson, who ran a 6.639, 209.20 and finished a half-car length behind the race winner.

"It was a great day for us," Line said. "If you want to win the championship you've just got to come out smoking. To race Greg in the final is a great thing. It's good, but it's bad because he's the last guy you want to see over there in the final. He gets the best of me most of the time, but today was my day."

Entering Sunday's eliminations as the number four qualifier, Elliss picked up round wins over Shawn Gann, LE Tonglet and top qualifier Angelle Sampey to advance first final round of the year and fourth against Hines, who was running in his fifth final in the last six races.

Hines jumped to the early lead final with a .005 light but Ellis powered back to pull even at the 1000-foot mark and just edged Hines at the line by less than three feet.

Ellis' win was the seventh of his career and his first since Englishtown in 2008, and boosted him from sixth to second in the Countdown standings.