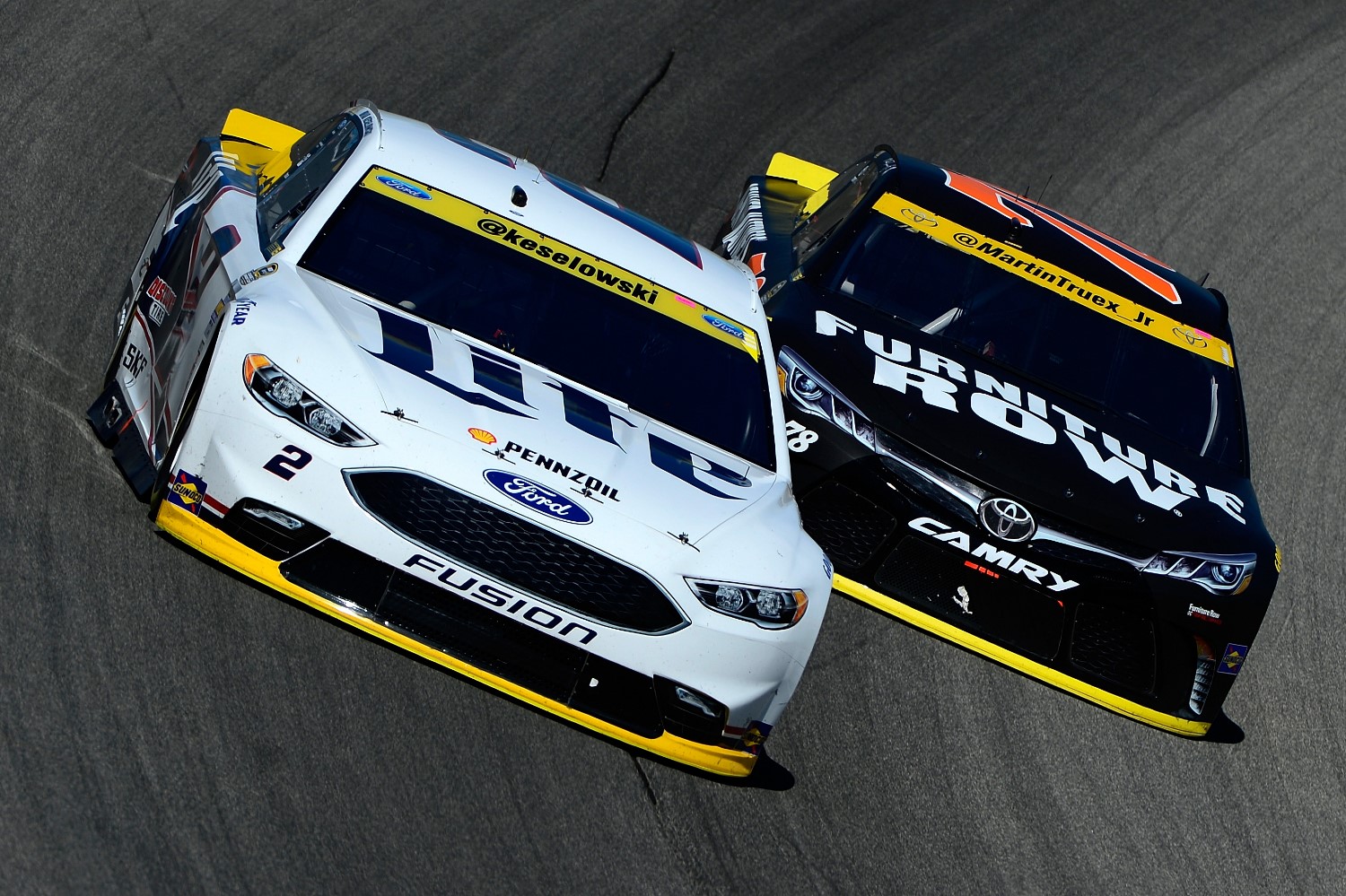 Martin Truex Jr. won the race off pit road on the final green-flag pit stop of the Teenage Mutant Ninja Turtles 400, sparking him to the win at Chicagoland Speedway on Sunday.

The speedy stop propelled Truex past rookie Chase Elliott, who had led 75 laps until the caution came out on Lap 262 of the 270-lap overtime race. The race was the first of 10-race Chase for the NASCAR Sprint Cup.

Joey Logano came up second in the No. 22 Team Penske Ford.

Elliott in the No. 24 Hendrick Motorsports Chevrolet, Ryan Blaney in the No. 21 Wood Brothers Racing Ford and Brad Keselowski in the No. 2 Team Penske Ford rounded out the top five.

[adinserter name="GOOGLE AD"]Chase drivers Kevin Harvick and Kyle Larson were saddled with obstacles to overcome before the race even started when both were sent to the rear for modifications to their cars after qualifying. Harvick had qualified fourth, while Larson was to start 10th.

Harvick quickly worked his way into the top 10, but went a lap down when he came in for a green-flag pit stop when a caution came out. He fought to return to the lead lap for much of the rest of the race; he finished 20th.

The 270-lap race tied the track-low with four cautions and featured nine different leaders. Jimmie Johnson led all drivers with 118 laps led. Johnson was slapped with a penalty for speeding on pit road late in the race, that pushed him back to a 12th-place finish.

The Sprint Cup Series heads to New Hampshire Motor Speedway next weekend for the continuation of the Chase for the NASCAR Sprint Cup in the New England 300 (Sept. 25, 2 p.m. ET, NBCSN, PRN, SiriusXM NASCAR Radio).

How does it feel to win at Chicagoland?

"Oh my goodness, I guess the racing gods don’t want us to lead too much. What can I say about everyone at Furniture Row Racing, Toyota, TRD (Toyota Racing Development), Bass Pro Shops, Denver Mattresses – just everybody that makes this possible– Sprint, the fans have given us a ton of support, not only over the years but the last two has definitely helped us. This feels good."

How does it feel to win the first Chase race and advance to the next round?

"We have more races to win – the more we can win the better. What can I say? There are so many people who are responsible for this and I’m glad I get to drive this 78 with Cole Pearn (crew chief) and everybody on this team. Barney (Visser, owner) gives us everything we need. Thanks to TRD — the engines were incredible again – Andy Graves (TRD vice president) and those guys are doing a heck of a job. JGR (Joe Gibbs Racing) builds our chassis and we have competition meetings with them and all that stuff has been an awesome relationship. What can I say – this is how we want to start off. This feels awesome."

What was going through your mind when you had to pit for the low tire?

"Don’t give up, just keep digging and there was only one way to go with that tonight. On one hand the bad luck was going to bite us and on the other we had a lot of time to battle back. We’re lucky it happened early and we were able to have an awesome race car all day. We’ll just keep working on it. We knew we weren’t that good early in the race and we struggled in traffic a bit. (Kevin) Harvick ran into us and bent our fender, I think on purpose and we had to come back from that. All in all, just an unbelievable day – it was a total team effort, that’s what it’s going to take to win the championship."

What does this win mean to your goal to make a difference with Ovarian Cancer month?

"It’s unbelievable. Just really proud of Sherry (Pollex) for what she’s done. I’m proud to be a part of it and all the guys that brought their steering wheels out this weekend – there was 15 guys today with their steering wheels and we have ours. Johnny Morris already said he wanted to buy the one from Darlington. I think it’s the same one so it has two wins on it. It’s just amazing what she has been through and how hard she is working to help others. It’s really neat to be a part of that."