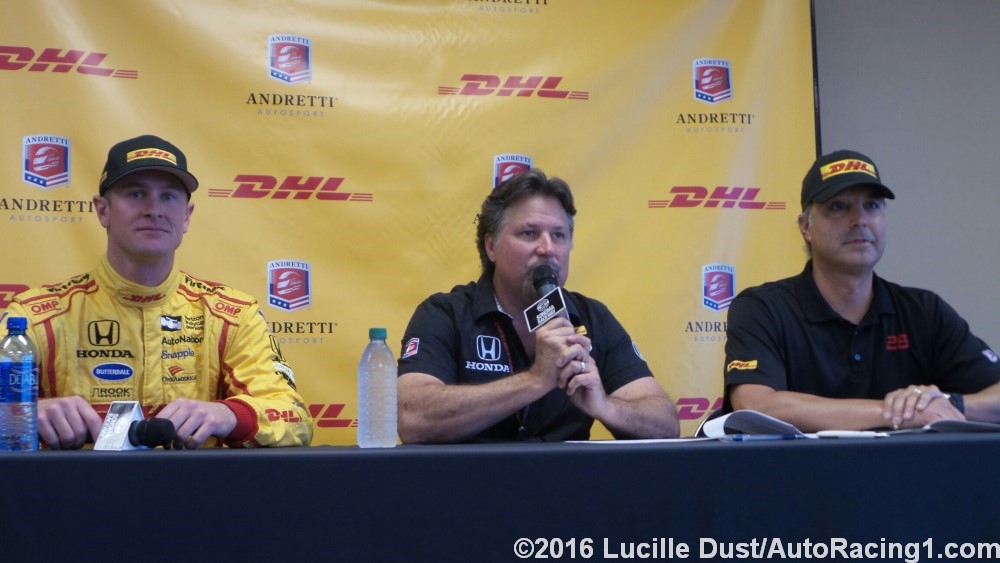 Andretti Autosport and DHL Express announced today the extension of their partnership which began in 2011. The world's leading express services provider will remain the primary sponsor on the No. 28 Andretti Autosport IndyCar through 2020.

"Our relationship with DHL grew out of a partnership that dates back to 2005," said Andretti Autosport CEO Michael Andretti. "To see this partnership develop and continue over a 15-year period, through 2020, is the result of hard work by both companies in support of DHL marketing, sales and B2B objectives. It also reflects the strength of the Verizon IndyCar Series and Indianapolis 500 properties."

In addition to this partnership extension, the Indianapolis-based, four-time Indy 500 and IndyCar Series Champions confirmed that series veteran Ryan Hunter-Reay will pilot the DHL-sponsored machine for four years beyond this weekend's 2016 season finale.

"The speed, reliability and dedication that Andretti Autosport, Ryan Hunter-Reay and the DHL IndyCar team exemplify are a mirror image of the qualities that enable DHL to be true to our motto of ‘Excellence, simply delivered'," said Mike Parra, CEO of DHL Express Americas. "It's an impactful way to engage our customers as well as employees with a world-class racing experience."

"Since we first teamed up with Andretti and Ryan Hunter-Reay in 2011, the partnership has been one of the most powerful ways for us to connect our global brand with the public," said Christine Nashick, Chief Marketing Officer for DHL Express Americas. "We are thrilled to continue this partnership for a decade, and with Ryan as our brand ambassador."

[adinserter name="GOOGLE AD"]Hunter-Reay, 35, is ranked as the most successful American driver currently racing in open-wheel competition today, with more wins than all of the other current American IndyCar drivers combined. With over 200 IndyCar race starts, the Florida-resident holds 16 wins, 36 podiums, and 96 top-10 finishes.

"I can't express how pleased we are to be able to announce that Ryan will be returning through 2020," added Andretti. "Ryan is one of the top – if not the top – driver in the series, and has been a leader within the team since he started with us in 2010, winning in only his third race. Ryan has won 13 races, an IndyCar Championship and the Indy 500 with Andretti Autosport, and I have no doubt this partnership will put us in a position for further success."

"I couldn't be happier about this announcement and the opportunity to continue with Andretti Autosport as an ambassador for DHL," said Hunter-Reay. "These next four years will take us to nearly a decade-long relationship with DHL and a full 11 years with the team. We've won 13 races together, the Indy 500 and the IndyCar Championship and we're going to do a lot more together. Over the years we have become more of a family than just a team and sponsor. I'm proud to represent this group and this brand and am looking forward to the milestones yet to come."

Hunter-Reay will take to the wheel of the No. 28 DHL Honda today for the GoPro Grand Prix of Sonoma. The 2012 Series Champion has finished second the last two years at Sonoma Raceway, and will be pushing for the win at 2016 Verizon IndyCar Series season finale. Catch all of the championship racing action live from Sonoma Raceway at 6:30 p.m. ET on NBC Sports Network.

THE MODERATOR: Thank you for joining us for today's announcement. I'd like to introduce our special guests seated to my left.

Today's event will include our announcements, insights from Ryan, Michael and Mike.

As you may recall, the DHL partnership with Ryan Hunter-Reay and Andretti Autosport began in 2011, when it was Ryan's second year with the team.

[adinserter name="GOOGLE AD"]At this time I'd like to turn things over to Michael to share today's news.

We think this is a huge deal not only for our team, not only for Ryan and myself and DHL, but also I think for the series. It's great to have a great company like DHL to make the commitment they are making. At the end of this contract, it will be 10 years they're committing to the series, as well as we've actually had an association with them for 15 years.

It's great to have an awesome company like DHL support IndyCar racing the way they have. I think this does a tremendous thing for our team, which is continuity, keeping things going, stability. It's something that's great to have that foundation to build on for our future to make ourselves better.

I can't thank DHL enough. I'm so happy to have Ryan back, to know he's going to be here. He's going to be an old man by the time this thing is done. My goal is having Ryan retire with our team. This is a big step forward to that.

Ryan, as I said in the press release, he's one of the best if not the best guy out there on the racetrack. We're really proud to have him be part of this team for so long. It's going to be another four years at least. I think that's awesome. Really happy about this announcement. So thanks.

THE MODERATOR: Gentlemen, you have some paperwork in front of you. Why don't you make it official.

THE MODERATOR: My first question is for you, Mr. Parra. This extension with Andretti Autosport places the DHL brand within the Verizon IndyCar Series through the 2020 season. What factors have helped shape DHL's commitment to this team and the sport?

MIKE PARRA: Pretty easy decision for us. Actually the decision happened about three or four weeks ago. It was on a plane ride with Christine. Christine is our CMO. She's actually responsible for this relationship.

Number one is to continue to partner with an iconic brand in Andretti Autosport, then an iconic driver in Ryan Hunter-Reay.

What has been consistent throughout our relationship with both Michael and Ryan is Ryan is a tremendous brand ambassador for us. He does an incredible job with our customers, with our employees globally and across the region. It was an easy decision for us to remain with two iconic leaders.

THE MODERATOR: Ryan began piloting the DHL car in 2011. During his time with the team he has captured successes that rank him as the most successful active American driver currently in the Verizon IndyCar Series. Off the track Ryan has had the honor to be your brand ambassador and visit both DHL customers and employees around the nation.

Can you speak to how important it is to have Ryan in this partnership?

MIKE PARRA: It's important for us. Every time we make a decision around the brand, we have what we call the 'brand police'. Christine is a component of that process in protecting our brand.

It was real easy to continue our association with Ryan. The impact that he has on our organization, he was recently in Canada this year. It was an eventful moment for all of our employees and customer base. After winning the 500 in 2014, after winning the championship, it just makes it real easy.

You have an individual who just dreams and lives this sport, and off the sport he's an incredible brand ambassador for us. It was easy.

Then the association with Michael, having the Andretti name associated with DHL. We say we're the world's most international company. Who better than to be associated with what I believe is the best owner and the best name in this business.

So for us, again with Ryan and Michael, a simple decision.

THE MODERATOR: Michael, Andretti Autosport first took a chance on Ryan in 2010. At the time the agreement only allowed for a few races. Ryan went out and in his third outing with the team captured victory in Long Beach. Did you have any idea 10 years later you'd still have Ryan in your stable?

MICHAEL ANDRETTI: Hell, no. I mean, it's just funny how things happen, right? We literally put the deal together in 2010. I think it was only for three races at that point. He was able to win on the third race. Then we were able to put together the rest of the season.

We were so lucky and fortunate to have a partnership already with DHL who was ready to go to the next level, to go to primary sponsorship. It just is one of those things that all worked out perfect.

THE MODERATOR: Ryan, your a 16-time winner in the Verizon IndyCar Series. 13 of those wins came during your time with Andretti Autosport. Tell us what we have to look forward to in your next four years with the team.

RYAN HUNTER-REAY: Hopefully a lot. That's what this organization, this team is all about.

First I want to say thank you obviously to Michael Andretti for what we just talked about, for giving me a shot and one of the best cars in the series if not the best. I got in there and knew I had a shot at it, gave everything I could.

I think the direction that we've taken, what we've accomplished together has happened for many reasons. It's because for both of us winning is the most important thing.

That goes along with DHL. Thank you so much for being what is the biggest part of my career. We won the championship together, the Indy 500, and we have a lot more to do. There's a lot more coming from this team.

It's family really. This group here, this partnership is family. Everything that we do we do together. We're all looking at moving forward all the time. We're never complacent. That is instilled in all of us.

That likeness is what makes this partnership work. I can't wait to be a brand ambassador for DHL for another four years and hopefully many years beyond that.

THE MODERATOR: You'll be starting from the sixth position today. You finished second for the last two years in a row here. How special would it be to celebrate in Victory Lane with your DHL family?

[adinserter name="GOOGLE AD"]RYAN HUNTER-REAY: It would be huge. I always say that Sonoma is one of those races that is a highlight on the schedule outside of Indy because everybody comes to this race. Everybody wants to be here. This is the season finale. It's Napa Valley. It's everything you want to be a part of. You want to win this race.

Being runner-up for two years was kind of bittersweet. To win here would be massive. It's a very difficult race to win, though, because it tends to be a strategy race. You get yellows that come out at times. You have the huge grip issue where everybody is sliding around out there. It's a major wild card race. You have to put your best foot forward.

But what is a good car in qualifying might not be a good car out on the racetrack. You kind of have to have the whole weekend go together. Hopefully we can put that together again and do one step better.

THE MODERATOR: Gentlemen, thank you for joining us.