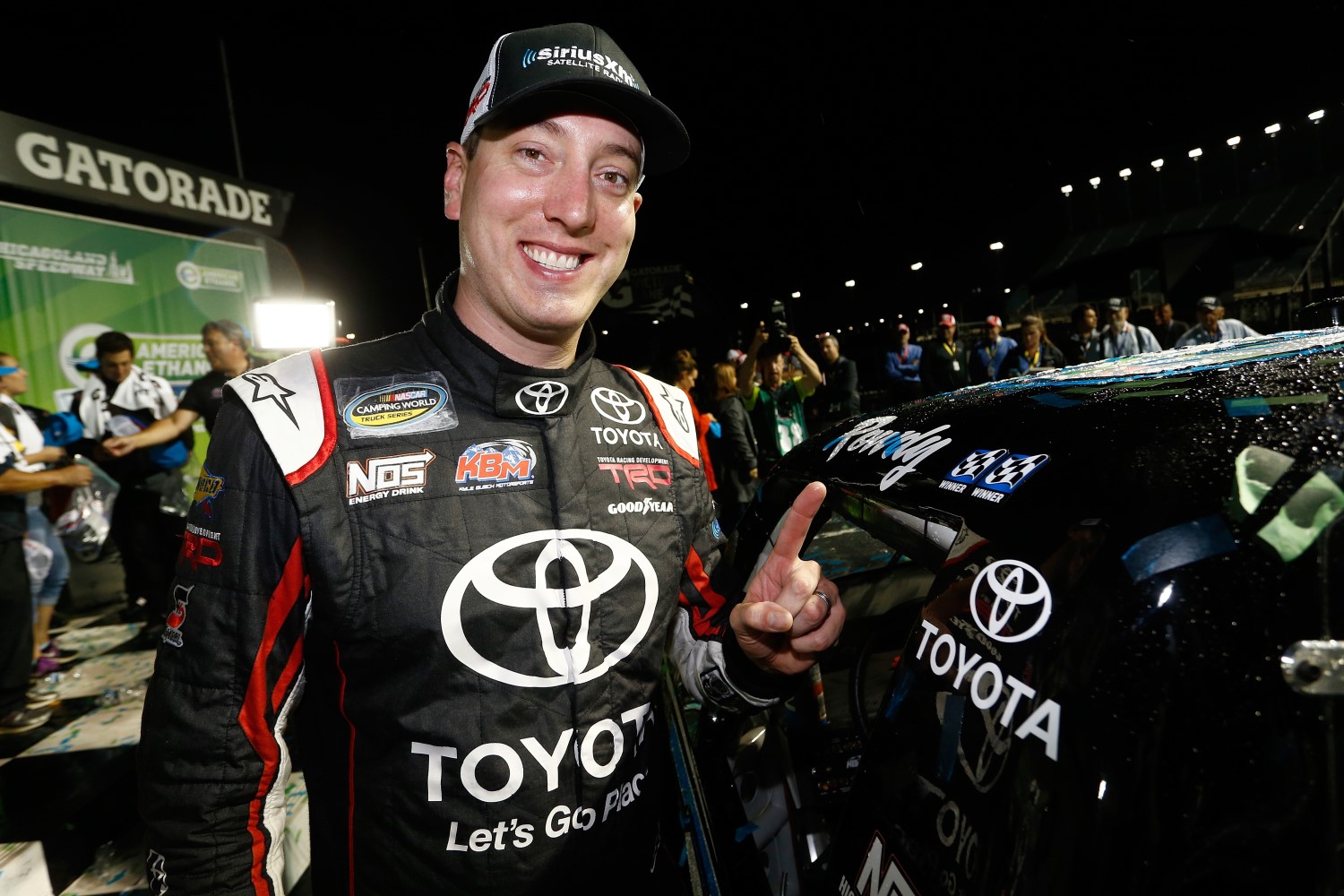 With Busch's victory over runner-up Daniel Hemric, who passed Hayley after the final restart on Lap 150, Hemric and Timothy Peters locked up the final two of eight spots in the inaugural NASCAR Camping World Truck Series Chase, which starts Sept. 24 at New Hampshire Motor Speedway.

With a truck dialed in on Thursday by last year's series champion Erik Jones while Busch took care of Chase for the NASCAR Sprint Cup media day duties, Busch led 95 of the 151 laps en route to winning for the second time in four starts this season. It was his fifth win at Chicagoland and the 46th time in his career.

Driving a Toyota Tundra built by Kyle Busch Motorsports, ThorSport Racing driver Hayley finished third but failed to make the Chase. Hayley was gaining ground on the race winner, when contact between the trucks of Tyler Reddick and John Wes Townley caused the ninth caution on Lap 144 and ultimately forced the race one lap past its scheduled distance.

On the final restart, Busch chose the outside lane and pulled away from Hayley and Hemric before NASCAR called the final caution on the last lap for Rico Abreu's spin and froze the field, with Busch the winner.

[adinserter name="GOOGLE AD"]"This has just been a really good place for us and for KBM over the years," Busch said. "We've been really fast here, so it was really nice to come out here and keep that speed going… I really appreciate Erik Jones being out here (Thursday) and working it in for me and everything that he did."

Two of Busch's KBM proteges, William Byron and Christopher Bell, already had qualified for the first NASCAR Camping World Truck Series Chase on the strength of regular-season victories. Byron, the top seed in the Chase with five wins as a rookie, had a tough night on Friday, getting loose underneath Ben Rhodes on Lap 3 and slamming the outside wall in Turn 2.

Byron placed 30th, but the low finish had no effect on his Chase standing with the reset of points after the race.

"It was really important, too, to see the 9 (Byron) and the 4 (Bell) make the Chase this year for KBM," Busch said. "They've got two opportunities there to go for the championship. And then the 13 (Hayley) there at the end, that's a brand new truck out of our KBM stable.

"That thing was fast. It was hard to hold him off. He was right there at the end, and he was really quick."

In fact, Hayley though he had the fastest truck but fell victim to Busch's vast experience in the series.

"We definitely had the faster track there at the end, but he blocked my every move," said Hayley, who missed the playoff by one position in the standings. "But overall, it was all I could do. … We're not in the Chase, but you can't say we didn't try."

Byron characterized his early accident as a learning experience.

"It was learning what not to do for the Chase," he said.

Kennedy got the worst of a violent Lap 112 wreck that started when Sauter tagged Kennedy's Chevrolet and sent it spinning into the wall. Kennedy, who led twice for four laps, emerged from the infield care center with a bandaged hand.

[adinserter name="GOOGLE AD"]"I bruised up my hand a little bit," said Kennedy, who felt he had a truck capable of winning.

How does it feel to be in victory lane again at Chicagoland?

"This has been a really good place for us at KBM (Kyle Busch Motorsports) over the years. We’ve been really fast here. It was nice to be able to come out here and keep that speed going with this SiriusXM Tundra. I really appreciate Erik Jones being here yesterday, working it in for me a bit, all the work the guys at the shop do a great job. I can’t say enough about Toyota, TRD and JGR Engines – this engine ran really well today. Thank Camping World and of course the fans, too. It seems as though it was perfect timing as it just started spitting a little bit here. All in all good day but really important to see the 9 (William Byron) and 4 (Christopher Bell) make the Chase this year for KBM. Two opportunities there to go after a championship. Also the 13 (Cameron Hayley) right there at the end, that’s a brand new KBM truck out of our stables, so that thing was fast – it was hard to hold him off at the end, he was really quick. Good job to those guys and finding speed in our stuff."

Can you describe how you were able to win this race?

"It was pretty good there through the middle part and we had some decent runs there and we had some speed on the long run for sure. There the short run stints at the end, I had really good help from Daniel Hemric who gave me a boost on the restarts. Awesome job by him reading the hand signals was pretty cool. Great run by everyone on this SiriusXM Tundra – I can’t say enough about these guys at Kyle Busch Motorsports who work so hard and do such a great job for us. We’ve won some races in the last year, it’s nice to get back to victory lane and show our strength in the series. It’s also good for us with the 4 (Christopher Bell) and 9 (William Byron) to be able to have a Chase shot and go race for a championship with those two guys."