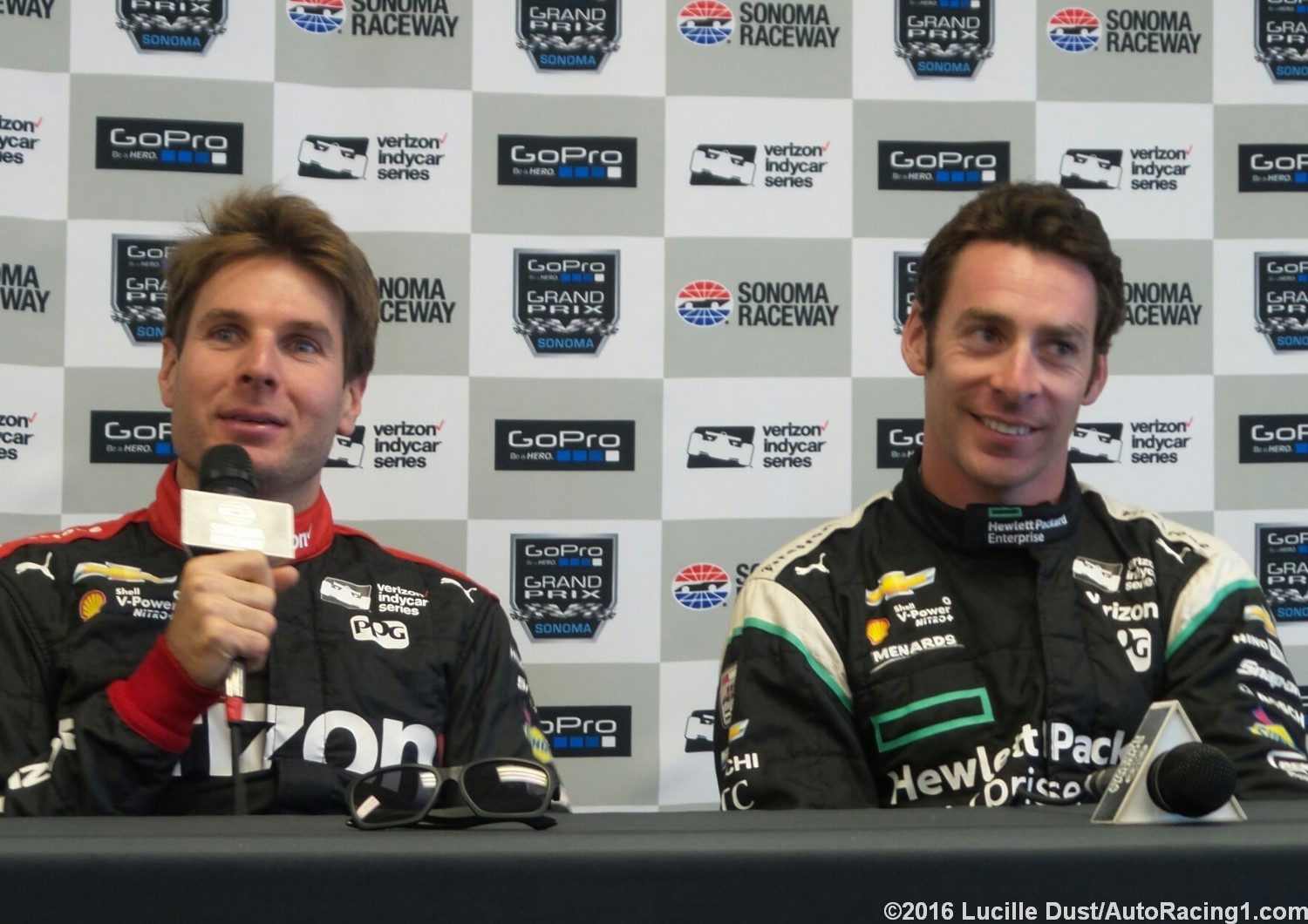 This is Team Penske's 50th Anniversary of racing excellence. The most successful team in racing history has 28 national championships, 16 Indianapolis 500 wins, two Daytona 500 championships and more than 430 major wins across open-wheel, stock are and sports car competition.

It began in 1966 as Roger Penske Racing, five years after Penske was named by Sports Illustrated as driver of the year in the Sports Car Club of America. Fifty years later, Team Penske is recognized as the most powerful enterprise in American motorsports, having 13 IndyCar championships, five NASCAR titles, over 100 NASCAR Sprint Cup victories and even a Formula 1 victory to its credits.

And this year, Team Penske will add another IndyCar championship to the list of achievements. The final two drivers that can claim the championship are Simon Pagenaud and Will Power. Both drivers are pretty calm and determined to finish the race this weekend and win the championship.

This is what Will Power said about racing with Simon, "If I come up on Pagenaud on the track when we are racing each other, I know it is another car that I have to pass. You don't what to damage yourself or him. Simon is going to be smart. If you have the car to do it, you pass him. If not, you have to settle for what you have at the time."

Simon commented about competing with Power for the title. "I mean, I'm in a different position to Will. Will needs to win the race to have a legit chance really. We don't have a big issue. But I think you just race like you usually do."

"But you do need to know where you're running around, that's for sure. We'll see. Obviously, yeah, there will be aggressive guys out there, like every year. The fact that it's double points gets everybody pretty excited – sometimes too much. We're going to have to be heads-up."

Pagenaud and Power were teammates in 2007 driving for Derrick Walker's team sponsors by Aussie Vineyards. Power was asked about how the chemistry between Pagenaud and him was. "We're both pretty competitive. Yeah, I would have expected this probably sooner, honestly. But obviously we went different paths for a while there and kind of ended up back here. Well, it was a pretty intense relationship at that point. We were actually good friends off the track. But it was intense in the engineering office, the young guy trying to make it."

It is going to be interesting this Sunday to see which of these two determined drivers will clinch the championship.

THE MODERATOR: Thank you, everyone, for joining us today for the Verizon IndyCar Series post practice press conference. We're pleased to be joined by our Team Penske championship contenders Simon Pagenaud and Will Power, who is 43 points behind Simon, leading into the GoPro Grand Prix of Sonoma at Sonoma Raceway.

Will, you're obviously the chaser for this race. What are your thoughts now that you've been on track and you really feel like you're getting into the weekend?

WILL POWER: Yeah, really we didn't do many laps. Only really two hard laps in that session, so… Haven't really got a feel for where we're at, if the Honda guys are really good or not. All that stuff is going to make a difference.

I think this next session is going to be real telling. I think everyone is going to run a lot because around the time we're qualifying the temperatures are going to be the same, and hopefully the wind is. We'll get more of an idea then.

THE MODERATOR: Why the limited track time? Did you go back and make changes to the car?

WILL POWER: It was cool, so that made the car a lot better. You know, the wind direction wasn't quite right. We were trying to save some tires. It didn't make sense to run very much.

THE MODERATOR: Simon, you're coming into this weekend as the points leader. You had several activities leading up to the week. Now that you're here, you've been in a racecar, what is your mentality as you are finally getting down to business?

SIMON PAGENAUD: It's definitely the best time of the week really. It's been for me a long week waiting.

Just excited to be here, excited to be in this fight, excited that we're able to, with Will and our teammates, bring another championship for Team Penske in the 50th year anniversary of the team. I think it's very important to Roger and the entire organization. It feels great.

Now it's about racing. Was hoping we could race last weekend, but didn't happen, so…

Yeah, like Will, for us, we're just saving tires, waiting for the conditions to be more similar to what's going to happen over the weekend. We know the temperatures are going to rise.

[adinserter name="GOOGLE AD"]It's so fast with these cars these days with the aero kit, that the temperature makes such a big difference. Also, as we know, it's a very abrasive tarmac here, so the tires get really used up. When it gets hot, it's even more the case. It will change as the day goes on. It may be more interesting to run this afternoon.

THE MODERATOR: You mentioned it's nice to be competing with your teammate because you know, regardless of what happens, Team Penske is going to get the championship. There has to be a bit of an awkward sense to it. Do you sense that at all?

SIMON PAGENAUD: No, I don't feel awkward. I want to be the one winning for sure, and Will does, too. It's great for Team Penske to win, but I do want to get this title.

We've had a great season. I think first and foremost, even before this weekend starts, it's just how great the season has been on the 22 car, the evolution compared to last year. The transition is done compared to being with Schmidt before.

Couldn't be happier to be where we're at right now. Like I said, I'm going to embrace the weekend and enjoy it.

THE MODERATOR: Questions for Will and Simon.

Q. Will, you've battled for the title with Dario a couple times, Scott, Ryan Hunter-Reay. Now you're battling your teammate. Is it easier to have to challenge someone within your team? Do you feel less pressure than fighting a team on the outside?
WILL POWER: I think what it does, it takes out the fact that you can have a teammate help you when you're competing against someone else. I guess at the end of the day we're just both racing hard to get the championship. Everyone else is out of the equation, too, so that makes it different, as well. We need to get this championship for the team. We know we've got it now, it's between Simon and I.

Yeah, a little different. I guess last year, I was definitely further away last year when I had a shot at it. But we have a realistic shot this weekend. Everything's got to fall into place. But, yeah, they're all different.

Q. Simon, how concerning is it that this is the last race of the season, guys are fighting for jobs? How do you manage that in the race?
SIMON PAGENAUD: I mean, I'm in a different position to Will. Will needs to win the race to have a legit chance really. We don't have a big issue.

But you do need to know where you're running around, that's for sure. We'll see. Obviously, yeah, there will be aggressive guys out there, like every year. The fact that it's double points gets everybody pretty excited – sometimes too much. We're going to have to be heads-up.

Q. Simon, how much information do you want to get in your ears during the race of where Will is?
SIMON PAGENAUD: It's important, for sure. In the meantime, like I said, it's about going racing. It's about not worrying too much about points. That's how you can lose it, just by worrying too much where he is, where I am, what's going on.

No, seriously, it's been business absolutely as normal. It really has. It's pretty funny how relaxed it is. I think we're both experienced enough to realize that at the end of the day it's going to be what it's going to be out on the track. Doing anything out of the car isn't going to make a difference, apart from working with your engineer.

Yeah, I mean, it's just a normal weekend for me. It really feels that way.

Q. Will, I asked Simon yesterday, so… When you two were teammates in '06 coming up in Champ Car, did you envision that a weekend like this would ultimately happen?
WILL POWER: Yeah, I would say when we were teammates in 2007 that would be the case actually, yeah. We're both pretty competitive. Yeah, I would have expected this probably sooner, honestly. But obviously we went different paths for a while there and kind of ended up back here. But yes.

Q. What was Simon like back then?
WILL POWER: Well, it was a pretty intense relationship at that point. We were actually good friends off the track. But it was intense in the engineering office, the young guy trying to make it (laughter).

But, yeah, it's definitely mellowed quite a bit.

Q. Will, how different is your mindset already having a championship in play, whereas the previous years you've been in championship contention, you were coming down to the last race?
WILL POWER: Yeah, I think at this point if I hadn't won one, I probably would have just been like, I'm not going to win one.

I said that in '14 actually. I went into '14, I'm not going to win a championship, so who cares. I just went and raced, and I won one. That's actually how I approached the beginning of that season, then it started coming together. Okay, I get it. Racing gods just want to play with you a little.

Q. How much less pressure is there because Roger has a title? You don't all have to worry about that.
WILL POWER: I think it's a good situation, a great situation. After what happened last year, just no way we could let that happen again. It was just such a pity, that we allowed Ganassi to get that title.

Yeah, it was unfortunate how it happened. But it didn't need to happen. We were very determined to make sure it didn't happen this year. It's a relief that we can just go and race.

Q. Would he crowd surf?

WILL POWER: I don't think I'd see Roger do that, definitely no. Maybe if we were at a deficit to Dixon, we won by a draw, maybe Roger would have gone out there. Maybe Cindric might have gone crowd surfing. But he's pretty cool about this one.

THE MODERATOR: Gentlemen, thank you very much. Good luck this weekend.