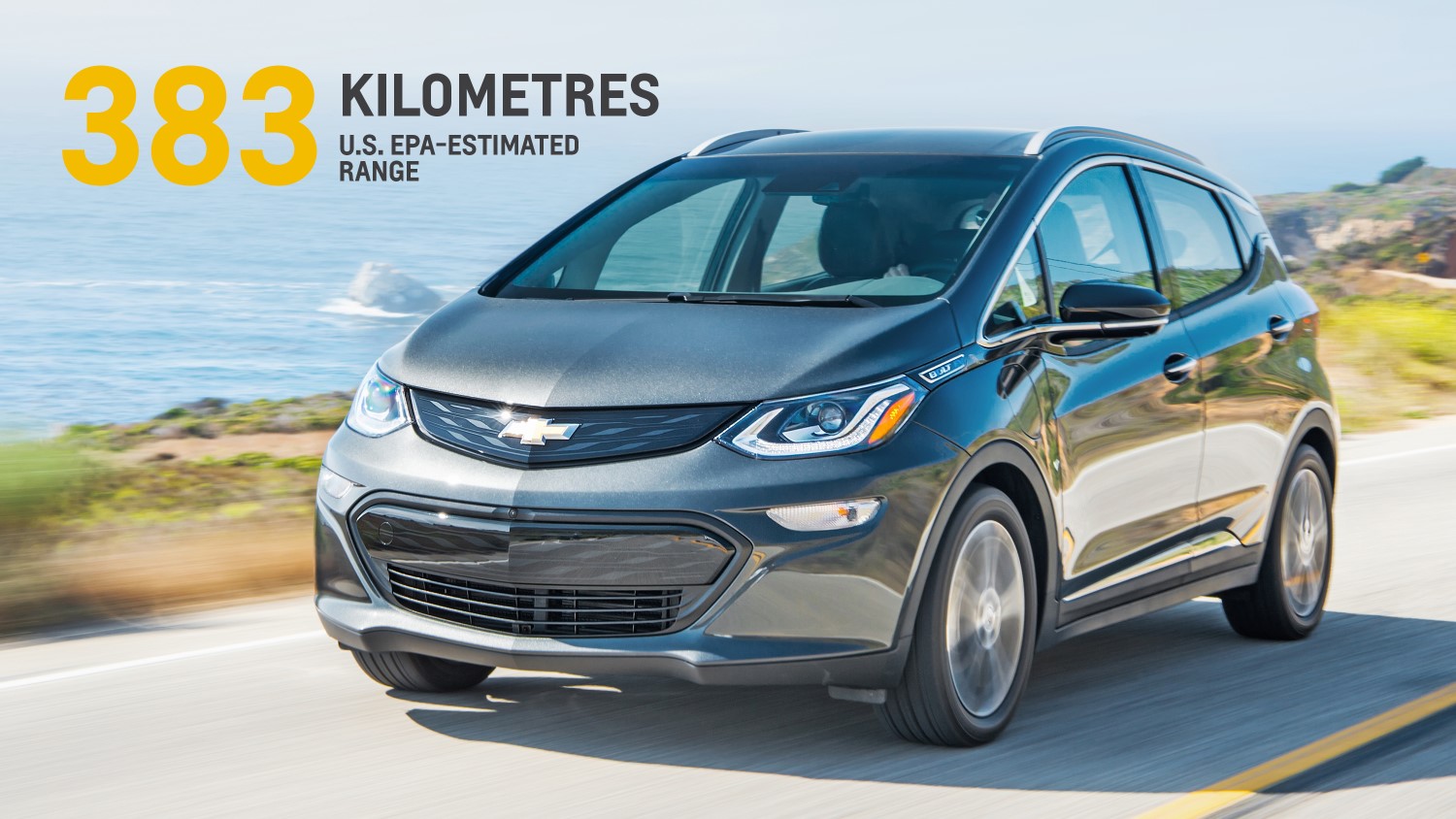 Chevrolet promised to offer the first affordable electric vehicle with 200 miles or more of range and will exceed those expectations when the 2017 Bolt EV goes on sale later this year. With the vehicle's EPA-estimated range of 238 miles, owners can expect to go beyond their average daily driving needs — with plenty of range to spare — in the 2017 Bolt EV when charging regularly.

"Chevrolet showed the world the production version Bolt EV earlier this year and in a few short months we've moved from that vision to a reality," said GM North America President Alan Batey.

"The Bolt EV is a game changer for the electric car segment and it will start to become available at Chevrolet dealerships later this year."

Bolt EV buyers won't be able to find a better value for an all-electric, thrill-inducing ride with an expected MSRP below $37,500 and before available federal tax credit of up to $7,500*. Plenty of range, cargo space, technology and safety features make the Bolt EV a great package for any driver.

"Our team took special pride in optimizing every aspect of this vehicle, especially its impressive range and ride dynamics."

More information on the Chevrolet electric family and the benefits of driving electric can be found at ChevyEVlife.com.

*Final Manufacturer's Suggested Retail Price not yet announced and does not include, tax, title, license or optional equipment. Actual savings from the federal government depend on individual tax situations.

Crowds formed and money seemed to rain from the sky when Tesla began taking deposits for its 200-mile, $35,000 Model 3 electric sedan in the spring.

It will be more than a year before the Model 3 hits the road — and that's if Elon Musk makes good on his promise to deliver the car by late 2017. But now, Chevrolet has created a Tesla fighter that's similarly priced, with even longer range — and it'll be available by the end of year.

The EPA says Chevrolet's 2017 Bolt EV plug-in electric vehicle will get an average of 238 miles per charge — far more than any comparable battery-powered car currently on the market.

The General Motors subsidiary announced Tuesday that its 2017 Bolt EV has achieved a federally tested range of 238 miles per charge. That impressive number — enough to travel from Los Angeles to Las Vegas without stopping to recharge — is the best of available battery-powered cars in that price range.

As the first mid-priced, long-range electric vehicle to hit the market, the Bolt could be the most convincing argument yet for mainstream acceptance of an electric vehicle.

Maybe. Analysts and car buyers have gotten excited about plug-ins before, but consumers remain mostly resistant to the electric powertrain technology — attracted by the environmental benefits and carpool lane stickers but put off by some combination of concern about range, price, location of charging stations and uncertainty about qualifying for tax credits.

Despite the availability of more than a dozen well-reviewed plug-in electric vehicles, annual sales of battery-powered passenger cars still account for less than 1% of all U.S. vehicle sales.

So getting to market a year earlier than the Model 3, even with a longer driving range, is no guarantee of success.

"Coming out of the gate with a higher number than [Tesla] is quite positive," Edmunds senior analyst Jessica Caldwell said. "But given the market situation, with green cars not getting much traction, it's still an uphill battle."

Chevy has said for some time that successful adoption of its planned Bolt EV could only be possible with a range of more than 200 miles and a price point of about $30,000. The company said again this week that the car is expected to have an MSRP of around $37,500, before federal tax credits of up to $7,500. (Tax credits are capped at 200,000 vehicles per manufacturer, meaning that not all electric-vehicle owners will qualify.)

But that range and that price point have been tough benchmarks for automakers to hit. Many plug-in electric cars cost less than $50,000 and can go 80 to 100 miles on a single charge. Of battery-electric production cars currently sold in the U.S., only Tesla's Model S sedan and Model X crossover can go more than 200 miles before recharging, and those vehicles sell for an average price of $110,000.

Analysts say the Bolt EV will need more than big range and little price — in particular, it lacks the "cool factor" that seems built into the Tesla line, Caldwell said. Compared with the sleek and low Model 3, the Bolt's small, rounded body is designed more for practicality and comfort than for speed, looks or performance.

"GM is going to make a great car that will be as good or better than the Model 3, from an engineering standpoint," she said. "But they don't have that kind of cachet."

Chevy has the advantage of speed to market. Whereas Tesla has been notoriously bad about meeting its delivery deadlines, Chevy's Bolt is almost ready for prime time, not long after the company showed off a production version of the Bolt earlier this year.

"In a few short months, we've moved from that vision to a reality," GM North America President Alan Batey said.

The EPA tests all automobiles sold in the U.S. for fuel economy and requires automakers to provide those numbers to prospective buyers.

In the case of electric vehicles, the federal agency also publishes numbers concerning the equivalent miles per gallon, average time to recharge the battery and other details.

The Bolt EV did well in all of those categories. According to the EPA tests, the Bolt EV averaged the electric equivalent of 128 mpg in city driving and 110 mpg in highway driving, for a combined MPGe of 119.

The EPA put the recharge time for the Bolt EV at 9.3 hours on a Level 2 fast charger. The vehicle can also be charged on a home system, at 110 volts or 220 volts, though those charge times would be considerably slower.

The numbers should assuage some so-called anxiety range, a consumer fear of running out of electricity far from a recharge station. Analysts believe range anxiety among potential EV buyers has contributed to keeping battery electric vehicle sales low.

In terms of range, the Bolt EV now outpaces its comparably priced plug-in competitors by a considerable margin.

Nissan's Leaf gets 107 miles per charge, while Kia's Soul electric gets 93. Not far behind, BMW's i3, Chevy's Spark EV, Fiat's 500e, Mercedes-Benz's B250e and Volkswagen's eGolf all get just under 90 miles per charge.

But Tesla still rules in terms of range — and image. Its Model S luxury sedan, equipped with Tesla's most powerful and expensive battery package, can get nearly 300 miles on a single charge, while its Model X luxury crossover can get more than 250 miles.

Lately the Tesla nameplate has been tarnished by several Autopilot-related incidents. One Tesla owner died when his Model S, while on Autopilot, slammed into a truck on a Florida highway.

On Sunday, Musk announced improvements to Autopilot that include shifting the system to rely mainly on radar to help the car navigate better.

It is not clear whether those changes can reassure prospective buyers — especially those who might shift their interest to a Bolt they can experience in a Chevy showroom from a Tesla they can only see online.

It may lack cachet, but it's real, which may result in some prospective Tesla customers asking to have their refundable $1,000 deposits returned.

"This will be a straightforward, delivered-on-time, Bolt offering today what Tesla is offering someday," Brauer said. "Some of those Model 3 commitments will be altered."