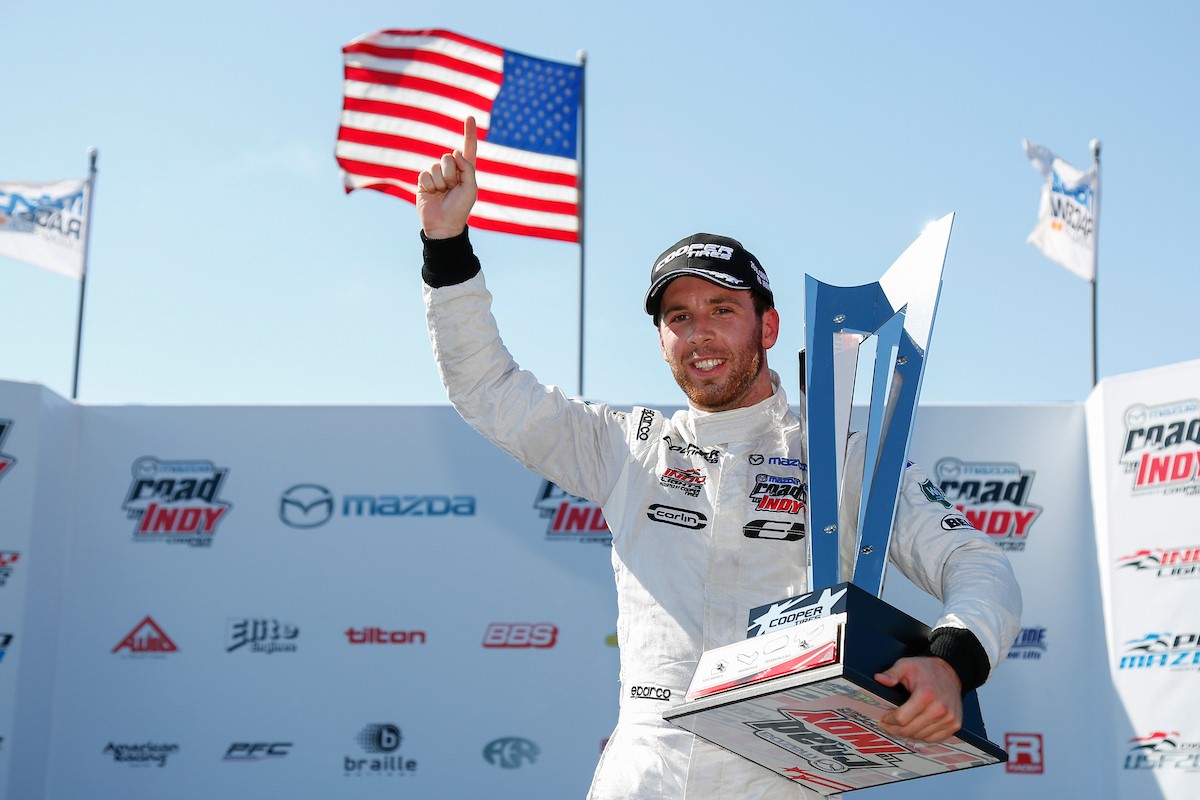 Today Dubai's Ed Jones won the Indy Lights Presented by Cooper Tires championship when his Carlin teammate Felix Serralles let his pass on the last lap to move him ahead of Santiago Urrutia (Schmidt Peterson Motorsports with Curb-Agajanian) unofficially by two points (363 to 361) and secure the $1 million Mazda advancement scholarship to advance into the Verizon IndyCar Series for a guaranteed three-race program.

After 15 hard-fought races between Ed Jones and Santiago Urrutia, the Indy Lights presented by Cooper Tires championship battle came down to one position on the race's final lap.

Urrutia, the 2016 Pro Mazda champion, was running second behind Zach Veach, but was level on points with Jones. That meant Jones, running fifth, needed to pass teammate Felix Serrales to win the championship.

When Serrales slowed in Turn 2 and allowed his teammate by, the Carlin driver claimed the series title and the $1 million scholarship package which will allow him to graduate to the Verizon IndyCar Series for at least three races in 2016, including the 101st Indianapolis 500 next May.

"Whatever happened on the last lap happened with Felix," the Dubai-based Brit said after receiving the trophy. "I was racing my own race, came out in fourth and won the championship."

Jones trailed Serralles nearly from the opening lap as he dropped him from first back to fifth as Veach rocketed from fourth to first in the first few corners and secured his third win of the season.

"The last 10 days have been the best days of my life," said Veach, who sandwiched a Verizon IndyCar Series test with Ed Carpenter Racing at Sonoma Raceway around wins at Watkins Glen and Mazda Raceway.. "Watkins Glen was a special win, but this weekend, we were a second-and-a-half off in first practice and my team busted their butts to give me the car we just had."

The championship is the first in Indy Lights for the Dubai-based Brit and the first for Trevor Carlin's team, both in their second seasons.

"The team has done an amazing job the last two years," said Jones, who unofficially outscored Urrutia by two points to claim the title. "This is only Carlin's second year in America. For them to be Indy Lights champion is an achievement. You can't deny how hard it's been. For me it's a dream come true as well. Second year there's always pressure, but to finally do it. To be in the Indy 500 next year, I can't wait.

A heartbroken Urrutia was comforted by his family and supporters as he sat on the side of his car with his head in his hands knowing the Carlin team rigged the finish and stole the title from him.

"It is what it is," the Uruguayan teenager said. "I can't say anything.

Team owner Trevor Carlin’s day was made complete by clinching the coveted Teams Championship by a 29-point margin, 413-384, over Schmidt Peterson Motorsports with Curb-Agajanian.