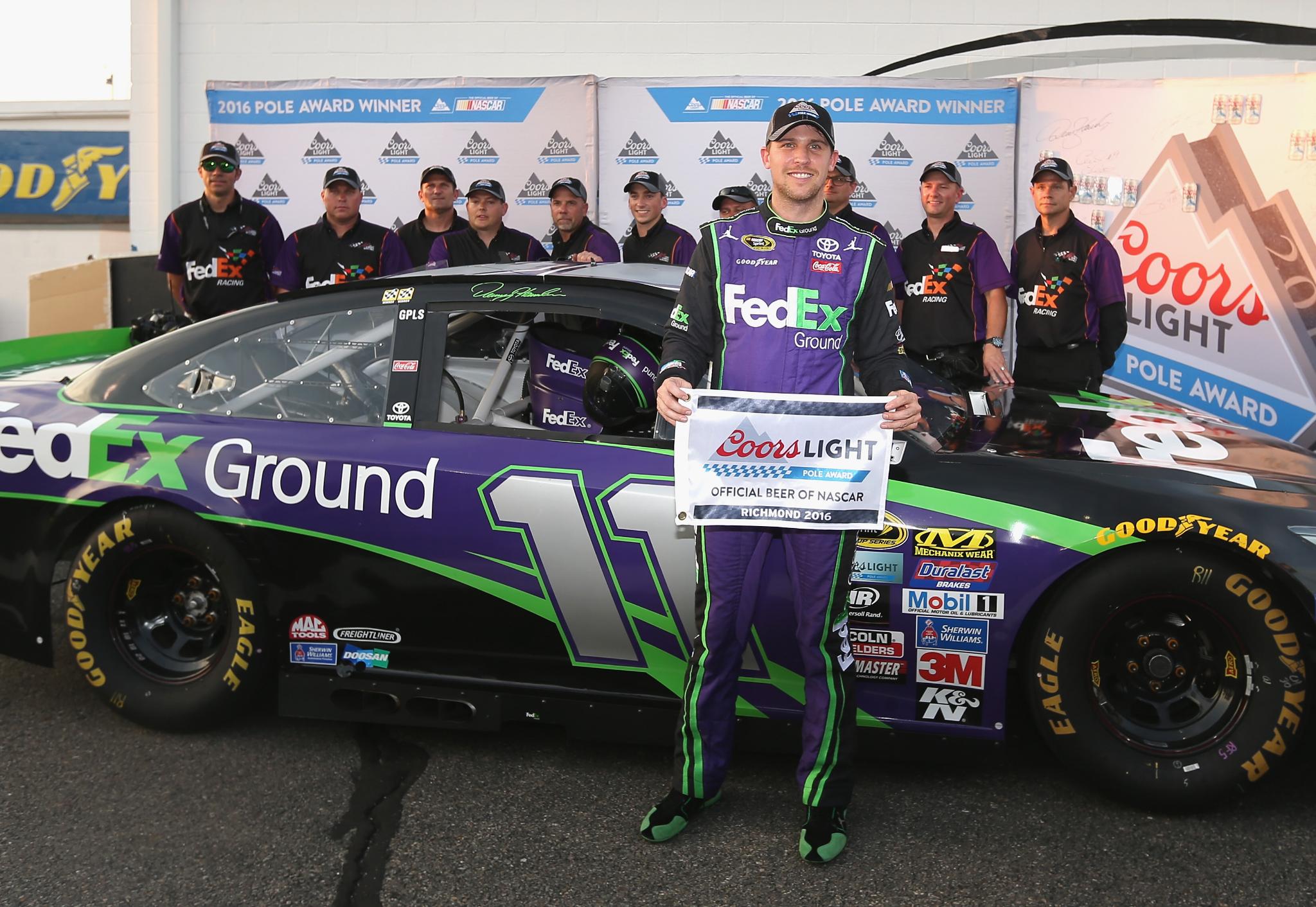 In the money round of Friday's knockout qualifying session, the driver of the No. 11 Joe Gibbs Racing Toyota toured .75-mile Richmond International Raceway in 22.069 seconds (122.344 mph) to earn the top starting spot for Saturday night's Federated Auto Parts 400 (7:30 p.m. ET on NBCSN), the final race in the NASCAR Sprint Cup Series regular season.

"I thought for sure we had too many laps on our tires," said Hamlin, who qualified in the top 10 for the 24th consecutive race. "A lot of the guys that we were challenging only had one lap per session, but my car didn't really come in that quick, so I had to run multiple laps.

"And on a short track that wears out tires, I thought we were at a huge disadvantage. Just proud of the effort. … And, obviously, running that fast for that many laps tells us we have a really good car for the long runs. So pretty optimistic, and we'll see if we can't get a win."

Though Hamlin edged Kyle Larson by .010 seconds to earn his first Coors Light Pole Award of 2016, his third at Richmond and the 24th of his career, the real drama of Friday afternoon involved drivers who qualified deeper in the field—in some cases, much deeper.

Pocono winner Chris Buescher, who is fighting to stay in the top 30 in the standings and thereby earn a Chase spot, qualified a disappointing 31st. Adding to the stress of the driver of the No. 34 Front Row Motorsports Ford was the qualifying performance of David Ragan, who is 31st in points and immediately behind Buescher.

[adinserter name="GOOGLE AD"] Ragan was 19th fastest in the first round of knockout qualifying, 12 positions better than Buescher. The problem? Buescher is just 11 points ahead of Ragan entering Saturday's race, with each position worth one point. Ragan slipped to 21st in the second round and failed to advance, meaning he'll start the No. 23 BK Racing Toyota 10 spots on the grid ahead of Buescher—too far for the rookie driver to enjoy a comfortable night's sleep.

Buescher also can stay in the top 30 if he finishes 10 spots ahead of Landon Cassill, his teammate.

"That's not where we wanted to be in qualifying with our CSX Ford Fusion," Buescher said. "We were a little better than we were last time here, so there is a little bit of positive to it, believe it or not. We'll be able to work our way up.

"At the end of the day, this weekend is about something bigger. We're trying to stay out of trouble and be there at the end. It won't be an easy walk from where we are at right now, but we'll be able to work our way up."

Jamie McMurray (122.189 mph) took control of another important head-to-head matchup, making the final round of qualifying and earning the fourth starting spot. The last driver currently in a Chase-eligible position on points, McMurray enters Saturday's race with a 22-point advantage over Ryan Newman, whose effort stalled in the second round.

Hit with a 15-point penalty on Wednesday after his No. 31 Chevrolet failed the laser inspection station after Sunday's race at Darlington, Newman will start 15th, likely needing a victory to advance to the Chase.

"Well, it's a really big weekend for us, but more than that, I'm just thrilled how both of our cars are running," said McMurray, Larson's teammate at Chip Ganassi Racing. "We've just made such big improvements.

"We ran good at a two-mile track at Michigan. We ran good at Darlington with a different rules package, and we've run good at a short track. As an organization, it's been really good, and the next 10 races, if we can get in, it's going to be pretty awesome, because our cars have peaked at the right time."

[adinserter name="GOOGLE AD"] Austin Dillon, who starts on Saturday nine points ahead of McMurray, took a significant step toward his first-ever Chase spot with an eighth-place qualifying effort at 121.638 mph. At the other end of the spectrum, another driver likely to experience a sleepless night is Chase Elliott, who qualified 34th in his No. 24 Hendrick Motorsports Chevrolet.

Elliott starts the night eight points ahead of Dillon and 17 ahead of McMurray. All three drivers share one hope, however—that there's not a new 2016 winner currently outside the Chase grid to reduce the number of Chase spots available on points from three to two (assuming Buescher remains in the top 30).

"We're just not going fast enough, for sure," Elliott said after failing to reach the second round. "I really don't know what our problem is, but we struggled in our mock runs earlier today, too. So, we just need to think about it, I guess, and try to go to work tonight.

"We're giving it our best effort. It just hasn't been where we need to be. The bad news is that it's a terrible starting spot; but the good news is that it's a long race tomorrow night. We have some teammates that are fast, so hopefully we can lean on them and try to get our Chevrolet a little better."

Matt Kenseth, Hamlin's teammate, qualified third. Kurt Busch, who paced the first two rounds, slipped to fifth in the session that decided the starting order of the top 12.