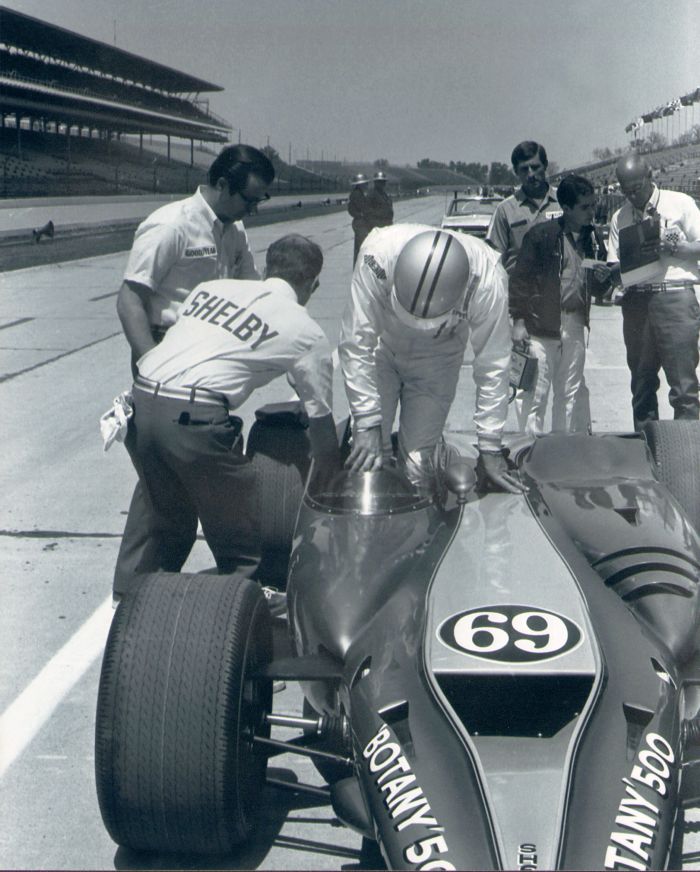 (Read Part 1 by clicking here) Ken Wallis was running out of time. Both of Carroll Shelby's turbine-powered cars were now at Indianapolis but they were nowhere near race-ready condition. His drivers, McLaren and Hulme, had only a six-day window before they returned to Europe for the Spanish Grand Prix.

In a desperate bid to make the cars competitive, Wallis used a liberal interpretation of USAC's rules to design a new annulus (the engine opening that fed air to the turbine). When measured by technical inspectors, the annulus was under the legal 16-inch limit. But at full throttle on the race track, a variable valve system opened to permit greater air flow into the turbine.

At best, this was a careful translation of the rules. If they were caught there was no guarantee that USAC wouldn't immediately disqualify the Shelby/Wallis Turbines. Such a move would be an unmitigated disaster not only for the team principals, but also for Goodyear, their drivers and their sponsors.

May 1st and 2nd were set aside to get Bruce McLaren through his mandatory rookie test at Indy. Over the May 4-5 weekend, Denny Hulme practiced at 157.2 mph and found that even the variable annulus wasn't providing the answers they hoped for.

The cars handled poorly. The brake system was never sufficient and although McLaren had supreme confidence in the turbine's ability to go, he was never quite sure of its ability to stop. But perhaps the biggest drawback of all was the car's power delivery.

[adinserter name="GOOGLE AD"]"Driving the thing is weird," McLaren said to a reporter at Indy. "You sit in it and press the brake pedal. They plug in a starter and it gradually winds up til it's whistling and then they flick some switches and it sort of goes 'Booo… whoosh.' You open the throttle and it still just coasts along, for about three seconds, that is. And then you've got 600, 700 or 800 horsepower… all at once. It's like trying to write with a rubber pen."

By Tuesday afternoon, May 7th, neither driver had exceeded 162 mph. The team was a full 10 miles per hour too slow.

According to Norton, the rumor along pit road was that USAC had been informed of the variable annulus on the Shelby/Wallis Turbines and was preparing a surprise inspection late that evening. Sponsors were embarrassed. Drivers were unhappy. Everyone associated with the effort was losing confidence.

Late on Tuesday, a turbine driver on a different team crashed heavily in Turn 1. Englishman Mike Spence was driving for Lotus when he hit the wall and was taken to the hospital with life threatening injuries. Now the reputation of all the turbines was at stake, and what began as a disappointment was spiraling into an out-of-control disaster.

A secret meeting was hastily organized in a nearby motel room between Shelby, their sponsors, Wallis, and a handful of team representatives. Nobody wanted to wait around for USAC's surprise inspection.

Clearly, the team wasn't going to win the race and at this rate they might not even qualify. Lotus turbine driver Mike Spence was in the hospital and not expected to live (he would die later that evening), and neither McLaren nor Hulme were comfortable in the Shelby/Wallis cars. USAC had made it obvious that the day of the turbine was coming to an end.

The decision was made. McLaren and Hulme took the next flight to Europe for the Spanish Grand Prix. Team members were quietly dismissed. A note was left on the garage door on pit road indicating that the team had withdrawn from the Indianapolis 500.

Under cover of darkness, the Shelby/Wallis Turbines were loaded onto a trailer and whisked away without turning a single lap of competition in the race they were supposed to dominate.

Their departure signaled the end of an era in the history of the Indianapolis 500. The once-great turbine-powered cars were outlawed. So was the thinking that created them. Neither would ever return to the speedway.

"It was the end of the golden days at Indianapolis, when out of the box thinking and creativity was the norm," Norton remembered.

"You just don't have the Novis and the turbines and the diesels any more. That sort of innovation is gone."