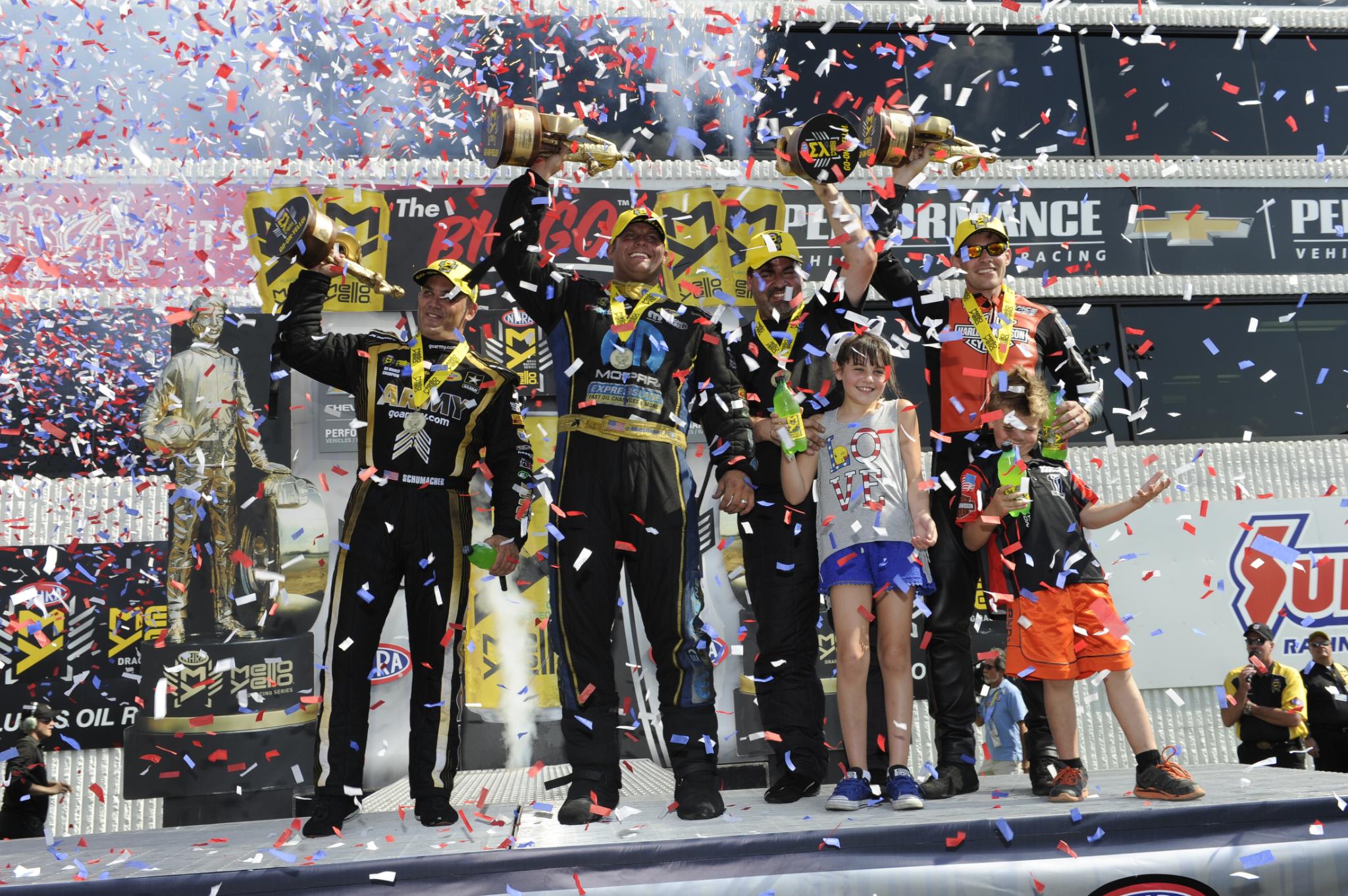 Tony Schumacher sprinted to victory on Labor Day at the Chevrolet Performance U.S. Nationals at Lucas Oil Raceway at Indianapolis.

Schumacher claimed his 82nd career win when he powered his dragster to a 3.806-second pass at 317.64 mph to beat Steve Torrence's 3.803 at 325.06 during the final round on Monday. The winningest Top Fuel driver in NHRA Top Fuel history also became the winningest driver in Lucas Oil Raceway history by tallying his 10th career victory at the venerable track. Schumacher outran Tripp Tatum, reigning world champ Antron Brown and Sonoma, Calif., event winner J.R. Todd in the earlier rounds before facing Torrence.

"I didn't see (Steve Torrence) for one second but I heard him," said Schumacher. "It was a great final round, live on FOX and I had my chance to win my 10th at Indy. The fans got a close race. It's been such a great career and it's been so much fun. I've had great teams, one after another, and it's a blessing to be a part of this and have a chance. I love my job and I love drag racing cars."

Schumacher, who also won the Top Fuel portion of the lucrative NHRA Traxxas Nitro Shootout this weekend, will enter the NHRA Mello Yello Countdown to the Championship six-race playoff as the No. 4 seed.

Torrence, competing in his sixth final round of the season, beat Bruce Litton, Shawn Langdon and Doug Kalitta in the earlier rounds. He is a three-time runner-up at Indianapolis and has two wins so far this season, which came at Pomona, Calif., and Englishtown, N.J. Torrence will enter the Countdown as the third seed.

Leah Pritchett, driver of the Papa John's dragster, clinched the 10th and final spot in the Countdown to the Championship after Terry McMillen redlighted in the first round in his Amalie Motor Oil dragster. Pritchett, who also lost in the first round, had a one-point lead over McMillen entering eliminations.

Hagan pushed Funny Car to a 3.964 at 327.43 to better reigning world champion Del Worsham's 3.958 at 324.20. This is Hagan's 21st career win and first at the Chevrolet Performance U.S. Nationals. The two-time world champ has three wins so far this season and enters the playoffs as the third seed. Hagan sprinted past John Bojec, Robert Hight and Tommy Johnson Jr. en route to making his fifth final round appearance of the season.

"It's incredible," said Hagan. "This is something for the last nine years that I've been driving for Don Schumacher Racing we have been trying to accomplish and it's not an easy task. I have the parts and pieces and people around me, especially (crew chief) Dickie Venables. I'm just proud to be a part of it. The fans got what they paid for today. I'm tickled to death to be up here right now. This is something that I've wanted to check off for a long time."

Worsham, who won four of the six Countdown races last year en route to his first Funny Car world championship, beat Alexis DeJoria, Dave Richards and points leader Ron Capps in the earlier rounds. Worsham has one win this season and enters the Countdown in the No. 2 slot.

Alexis DeJoria, driver of the Tequila Patron Toyota Camry, clinched the final Funny Car spot when Chad Head lost to Capps in the second round.

In Pro Stock, McGaha tallied his first win in 2016 by racing his Chevy Camaro to a 6.688 at 207.15 to defeat Allen Johnson's 6.715 at 207.09 in his Dodge Dart. McGaha, who was the runner-up at Phoenix earlier this year, has four wins in his career. This was his first final round appearance at Indianapolis. The Texan will enter the Countdown as the No. 7 seed. He outlasted Matt Hartford, Curt Steinbach and two-time 2016 runner-up Vincent Nobile en route to the final round.

"We got to keep doing what we were doing today," said McGaha about his chances of winning the championship. "If we keep doing what we were doing today, we'll definitely have a shot. I botched a lot of runs along the way. We shouldn't even be in seventh. Between tire shaking and making bad calls and flat getting our butt kicked, we should be a lot higher. It's not impossible at this point. Just got to keep winning."

Hines took over the Pro Stock Motorcycle points lead by riding his Harley-Davidson to a 6.682 at 194.63 in the final round to beat Hector Arana Jr., who redlighted on his Buell. He earned his 47th career win, fifth of the 2016 season and second at Lucas Oil Raceway with the effort. The winningest Pro Stock Motorcycle racer in NHRA history beat rookie Melissa Surber, alligator farmer Jerry Savoie and Sonoma winner LE Tonglet in the earlier rounds.

Arana Jr. made his first final round appearance of the season by riding past Michael Ray, Chip Ellis and rookie Cory Reed in the first three rounds. The 2011 Indianapolis winner will head into the playoffs as the No. 7 seed.

LE Tonglet, Chip Ellis, Hector Arana Sr., Matt Smith and Reed all clinched spots into the Countdown to the Championship.

The 2016 NHRA Mello Yello Drag Racing Series will continue with the NHRA Carolina Nationals, Sept. 16-18, at zMAX Dragway in Charlotte, N.C. The event is the first race of the six-race NHRA Mello Yello Countdown to the Championship playoffs.