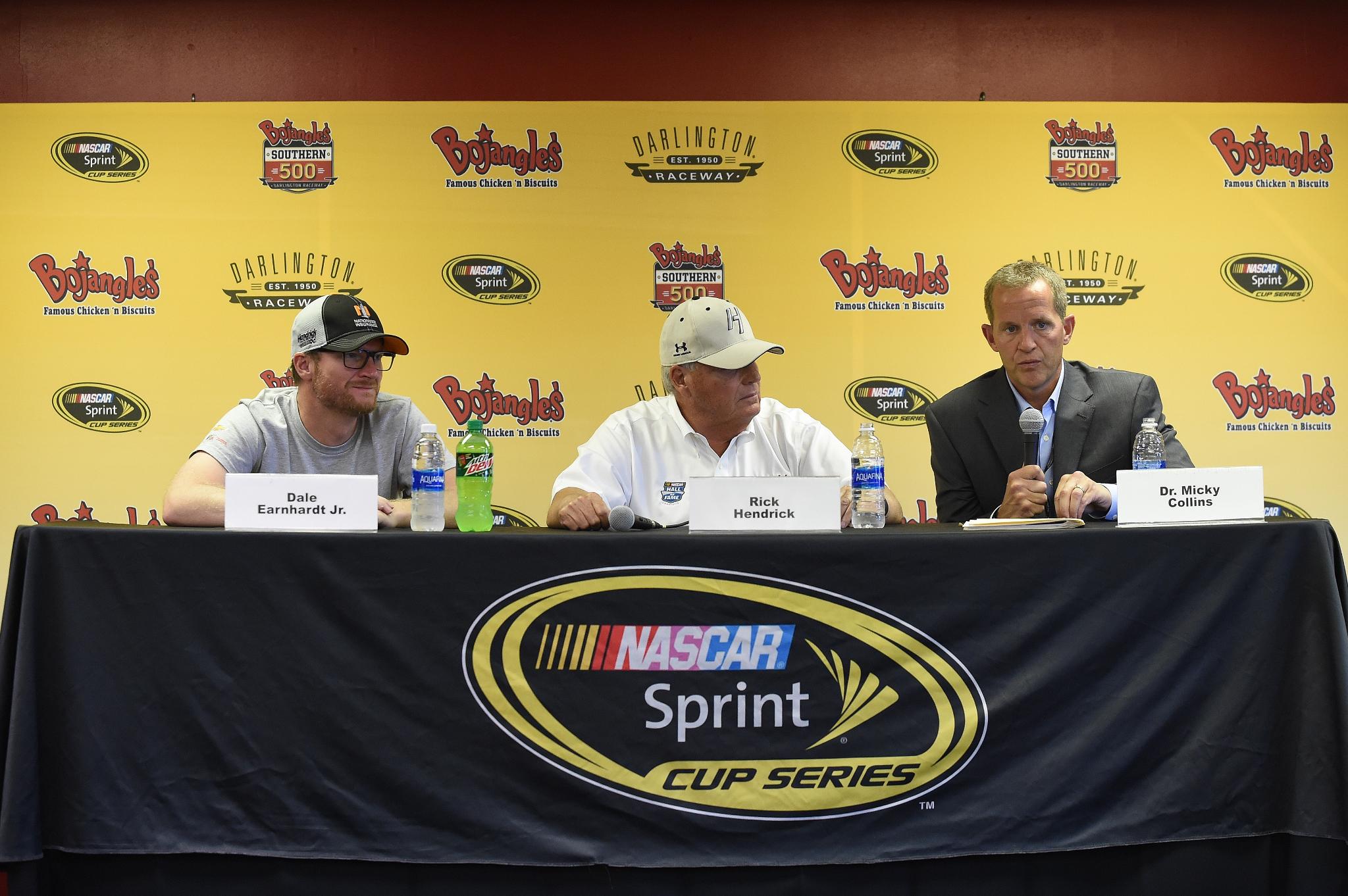 Dale Earnhardt, Jr. quashed any talk of retirement on Sunday and promised to return to compete full time in the Sprint Cup Series in 2017.

Addressing the media Sunday afternoon at Darlington Raceway for the first time since Hendrick Motorsports announced Friday that he would miss the rest of the 2016 Sprint Cup season, Earnhardt, Jr. said he was pleased with his progress and looks forward to being back in the car for Speedweeks at Daytona in February of next year.

Earnhardt, Jr. has faced a long and difficult road to recovery – missing seven races so far since he started feeling symptoms following a crash at Michigan International Speedway on June 12.

"It's been a real interesting experience," said Earnhardt, Jr. "I struggled with my eyes for a while – I'm starting to see improvements there. My stability is started to improve which was a major relief for me because that was probably the most difficult thing to deal with throughout the day because it was there 24 hours a day. My balance is miles better than it was.

"It's been a good experience. I'm looking forward to getting well, and we're definitely on the right track."

Dr. Collins had previously treated Earnhardt, Jr. for a concussion in 2012, where he missed two races following a hard crash at Talladega in October, however he stressed that Earnhardt, Jr.'s current concussion symptoms are different from the one he suffered in 2012.

[adinserter name="GOOGLE AD"] "I treated Dale in 2012. I can tell you some of the exam findings and findings that we found with this injury were different, they were more extensive," said Dr. Collins. "Different types of injuries that we see and now you understand better perhaps why that is there are different types of concussions. We see different symptom profiles. The injury at Michigan kind of broke the seal on this injury and when we saw him he was having a lot of problems, but clearly we are seeing Dale improve at this point in time and we are excited about his progress."

Earnhardt, Jr. had hoped to miss only a handful of races, and had even mentioned on his official Twitter feed that he felt his symptoms were improving, however his doctors have refused to medically clear him to return to the track this season.

"I definitely don't belong in a race car today by any stretch of the imagination," said Earnhardt, Jr. "You don't know how long this process is going to take and we want to be healthy and able to compete at some point, but also we don't want to take any risks and re-injury ourselves or put ourselves in a situation where we can basically erase all the hard work that we have done to get better."

By taking Earnhardt, Jr. out of the car, Dr. Collins hopes that eliminating the stress of trying to get back in the car would help Earnhardt, Jr.'s treatment.

"Though he is improving it is very clear that his test result and our findings, the things we look at are not back to normal," said Dr. Collins. "Dale is a competitor. He wants to be back in a race car like no other. The stress that he puts on himself for that is very apparent when I sit down and talk to Dale, he wants to race. I felt that myself and Dr. Petty….we sat down and I feel very strongly the right decision was made to take Dale out of racing, so we can focus on getting him better and reduce the stress that is associated with that.

"Stress and concussion don't get along well and we see stress can really exacerbate and worsen things. I don't think its coincidence that since we made that decision we are starting to see a lot of progress here that I'm excited about."

With Earnhardt, Jr.'s history of concussions, the question of whether Earnhardt, Jr. might retire has been foremost on the mind of his fans and the media.

Earnhardt, Jr. himself says that he has no plans to hang up his helmet yet.

"I have the passion and desire to drive. I enjoy it," said Earnhardt, Jr. "I have an amazing team, and I'm in such a great position and enjoy being part of this sport. My heart is there to continue, and if my doctor says that I'm physically able to continue, that's an easier decision for me to make.

"It's not something that I think about, we're trying to focus on just getting well and getting normal. I intentionally all those thoughts on the backburner until I can really just say that I feel normal, because getting normal and having a good quality of life going forward is the first goal.

"My heart wants me to continue. I'm only 41; I think I have some good years left. Rick likes to says we have unfinished business, and I certainly feel the same way – we have races to win.

"I want him to race for me as long as he can and he wants to be there. The seat is his," said Hendrick. "We're excited about Dale Earnhardt, Jr. being in the car at Daytona, and excited about him racing beyond 2017."

Earnhardt, Jr. said was confident about his treatment and believes he can come back a strong as he did back in 2012, and pick up right where they left off in 2016.

"We went through this process in 2012, it was very scary and difficult, but (Dr.) Micky (Collins) told me that I would one day be well and I would win races again and he was right – we got well and I had some of the great years and greatest experiences of my career," said Earnhardt, Jr. "He's telling me that this is possible again and I believe it. If we work hard enough and we rehab these systems, anything is possible from here on out, so I'm feeling very good and confident for the future."