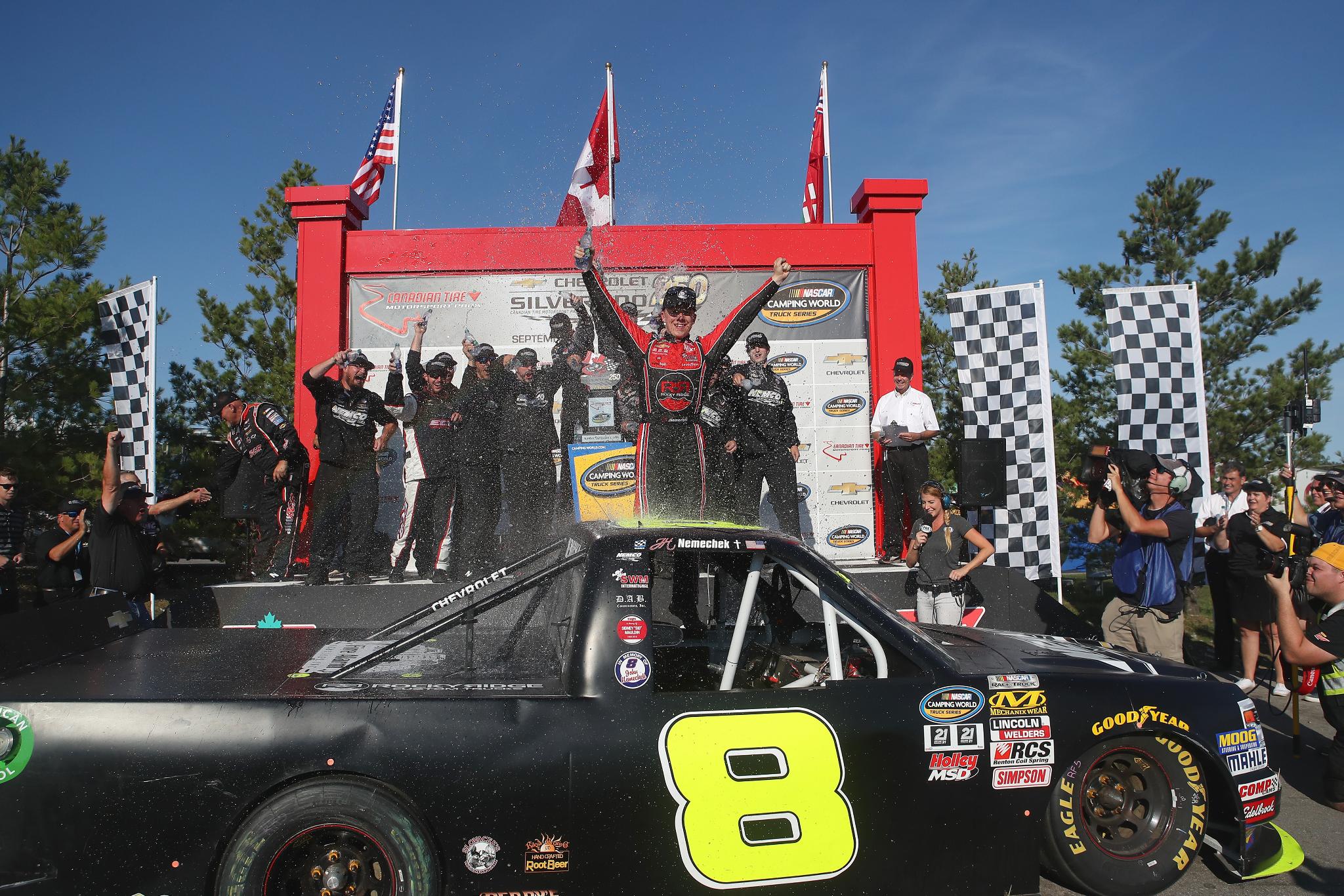 In what has quickly become tradition for the NASCAR Camping World Truck Series when it races north of the border, the Chevrolet Silverado 250 produced yet another wild and memorable finish.

This time around at Canadian Tire Motorsport Park, John Hunter Nemechek and Cole Custer made contact on the last corner of the last lap and crossed the start-finish line in the grass in a virtual tie.

Daniel Hemric – who was briefly shown as the winner on the official timing and scoring feed before NASCAR officials sorted out the photo finish between Nemechek and Custer – was third, defending champion Matt Crafton finished fourth and rookie Christopher Bell came home fifth.

"It was exciting to say the least. I can't thank all of my guys enough for the hard work they put into this truck," Nemechek said.

Despite not leading the most laps, Nemechek's No. 8 NEMCO Motorsports Chevrolet proved be a strong runner, particularly in the latter stages of the race, as the second-generation NASCAR driver led 19 laps and was able to stay in touch with the front-running Custer on consecutive late-race restarts.

As for the contact with Custer at the finish and the ensuing tussle that took place between the two on the frontstretch post-race, Nemechek chalked it up to the burning desire to win.

"Cole and I, we're very competitive racers and we would have done anything in the same position to make sure we get that win," he said.

For Custer, however, the result was an especially tough one to swallow.

The 18-year-old Californian was a dominant force all weekend in the No. 00 Haas Automation Chevrolet, winning the pole in record-setting fashion and leading for a total of 39 laps during the race in a bid to secure a spot in the inaugural eight-driver NASCAR Camping World Truck Series Chase.

His anger and disappointment was palpable when he spoke with reporters afterwards.

"I was expecting it, kinda, because he's raced a lot of people like that but it's just a shame because it was a great chance to get into the Chase and he took it away from us," he continued.

Despite the missed opportunity, Custer will have one more chance to qualify for the Chase if he can win the final race of the regular season at Chicagoland Speedway on Sept. 16.

Nemechek was already locked in to the Chase coming into the weekend by virtue of his win at Atlanta in February.