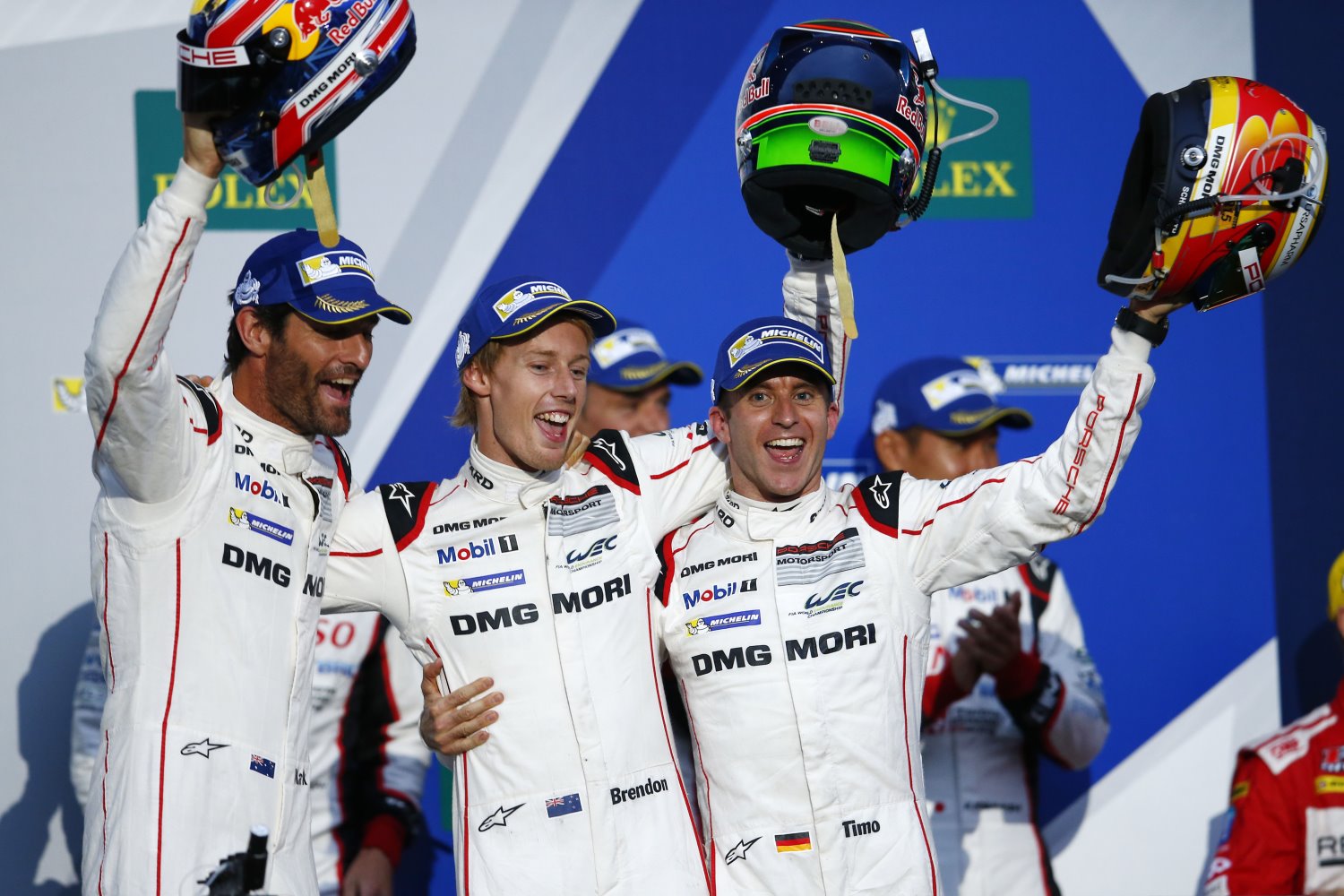 Mark Webber, Timo Bernhard and Brendon Hartley swept to their second consecutive win of the 2016 FIA World Endurance Championship season at the 6 Hours of Mexico presented by AT&T today.

Rebellion Racing took a straight forward win with the No.13 Rebellion R-One-AER of Alexandre Imperatori, Mattheo Tuscher and Dominik Kraihamer.

LMP2 was won by local favorites RGR Sport who sent the crowd in to rapture by winning the class in the final hour after the leading G-Drive Racing Oreca-Nissan suffered a brake problem.

The LMGTE Pro and Am classes were claimed by the No.97 Aston Martin Racing car of Darren Turner and Richie Stanaway and the No.88 Abu-Dhabi Proton Racing Porsche 911 RSR of Pat Long, David Heinemeier-Hansson and Khaled Al Qubaisi.

Porsche has claimed its fourth FIA World Endurance Championship victory of the season, in a rain-affected and incident-filled Six Hours of Mexico.

Timo Bernhard took the No. 1 Porsche 919 Hybrid across the line 1 minute and 1-second ahead of the No. 7 Audi R18 of Andre Lotterer, in wet conditions, following a second batch of rain that arrived in the final 20 minutes of the race.

The No. 1 Porsche clawed back a nearly 40-second deficit in the fourth hour after a drive-through penalty for crossing the pit entry line, but made good calls on tires, first going for wets before transitioning to intermediates and then to slicks for the final stint.

As previously at the Nurburgring, Audi fought a close battle for victory with Porsche. In the first half of the race, the number 8 Audi R18 had the best chance for victory. Lucas di Grassi (BR) took the lead early from his teammate Andre Lotterer (D) and, running in position one, turned driving duties over to Loic Duval (F).

The Frenchman maintained his place in the group of front runners as well. When Oliver Jarvis (GB) took over car number 8, a technical defect occurred on his first lap. The left front wheel bearing failed so that the Briton had no chance when braking to enter the next turn and drove into a tire barrier. The subsequent repairs cost the squad more than 30 minutes.

[adinserter name="GOOGLE AD"]At this point in time, when rain set in, Audi Sport Team Joest opted for intermediate tires. Andre Lotterer proved it was a perfect choice for the shower. The German recovered to the front of the field in this stage: a remarkable performance as car number 7 had previously dropped to fifth place.

In spite of correct calculations and impeccable pit stop instructions, the race car with Marcel Fassler (CH) at the wheel had run out of fuel in the pit lane so the team had to push it into its correct position and lost a lot of time. While Lotterer was battling for victory in the final stage a defect in the brake system occurred. This cost additional time, so the team ultimately had to settle for position two after six hours of racing.

Bernhard’s lead was consolidated in the final hour when the No. 7 Audi of Lotterer lost more than 30 seconds after locking up his brakes and brushing the wall, following a charge through the field on slicks on the drying track.

The German, however, made up ground again in the closing stages, after opting for intermediates on his final stop with 13 minutes to go and Bernhard losing 20 seconds after hitting a curb and nearly making impact with a barrier with six minutes remaining.

Despite the late-race scare, it marked the second consecutive win for defending World Champions Bernhard, Mark Webber and Brendon Hartley, who have extended Porsche’s lead in the manufacturers title race.

The No. 7 Audi of Lotterer and Marcel Fassler, again without Benoit Treluyer, was second, after battling early grip issues and running out of fuel in the third hour, and losing considerable time before that due to an ill-timed Full Course Yellow.

Stephane Sarrazin, Mike Conway and Kamui Kobayashi completed the podium in third in the No. 6 Toyota TS050 Hybrid, rebounding from an accident on Thursday, subsequent tub change and gearbox issues prior to the race.

Romain Dumas took the No. 2 Porsche to a fourth place result after fading in the late stages after electing to stay longer on wets during the first rain spell. The car also lost time due to a rear deck change after contact from a LMP2 car.

Quotes after the race:
Fritz Enzinger, Vice President LMP1: “This was one of the most thrilling races I have ever seen – because of the enormous competition and also due to the changing track conditions. First and fourth means we’ve got a lot: another race win plus extending the lead in both the manufacturers’ and the drivers’ world championship. Many thanks to everybody! Now we return home to Weissach to make in-depth preparations for the coming race in Austin. In two weeks we want to push our mission further to defend both titles."

Andreas Seidl, Team Principal: “What a race – once again all three manufacturers were on the podium. We managed to extend our lead in both championships, which means another step on the way to our mission of defending both World Championship titles. Congratulations to the entire team for this challenging weekend and race. Today it was difficult to get all the decisions right. For the number 1 car it worked perfectly and they deserved to win the race. For the number 2 crew our strategy didn’t work out in the changing weather conditions. On top of that, we had an incident when a LMP2 car touched the rear of our car. Afterwards we focussed on bringing home points for the championship. Also on this special circuit we have proven that our car can win a race. This makes us confident for the remaining rounds of the championship."

Drivers Porsche 919 Hybrid number 1
Timo Bernhard (35, Germany): “Sports car racing couldn’t be any better! I was third in the car and opened a good gap on the number 8 Audi. During my second stint in the last third of the race the final 20 minutes especially turned out to be very difficult. In sector three, as it was suddenly wetter than the lap before and I made a small mistake. Luckily I didn’t touch anything and was able to continue. It was outstanding how the team prepared the 919 Hybrid for these special conditions, the new track and the altitude."

Brendon Hartley (26, New Zealand): “What a race, I’m very happy about this race win. It was a good start, I was able to overtake Marc in turn one for P3. You could see the Audis were struggling a bit. I was unlucky with traffic, and so Di Grassi was able to make a gap of ten seconds. But then I was able to get in front of Lotterer, and it was a good battle. Later I took the lead. The stop-and-go penalty threw me back to third for a while, but the car was feeling mega and the boys did fantastic pit stops."

Mark Webber (40, Australia): “Another race win for Porsche and the number 1 crew. During my stint in the first third of the race I had a great battle with Lucas Di Grassi, and he was hunting me down for almost the entire stint. The call of the day was to manage traffic and find a rhythm. Also the track was pretty changeable. Not only when it rained, but also earlier. Sunshine was not what we wanted today. We had set-up the car in a way that it would become better the cooler the track became. Also the difficult decisions on tyres worked well for us, the team once again did a great job."

Drivers Porsche 919 Hybrid number 2
Romain Dumas (38, France): “I did the third stint in our car and managed to make up a few seconds. However, some of that was lost again at the pit stop because we stopped with both cars at the same time and, therefore, I had to be pushed back. Again in the final stint of the race I did my best and managed to catch up. But in the end for us more than 12 points weren’t possible today."

Neel Jani (32, Switzerland): “Unfortunately we have outbraked ourselves today. Because of weather forecasts not becoming reality, we were on the wrong tyres for the conditions more than once. Today we could have gained more than 12 points in the drivers’ championship because our strongest rival dropped back. It is a missed chance. Nevertheless, I’m happy for the sister car and for Porsche’s points in the manufacturers’ championship."

Marc Lieb (36, Ludwigsburg): “Having started second, finishing fourth is not what we had hoped for. The start wasn’t easy. The Audis played very well together and I was surprised by Brendon. On my first stint especially I had difficult situations in traffic. Later in the race, when we had drizzle and rain, the track conditions were tricky. Several times our tyre choice wasn’t right. For us there was more within reach today and, therefore, we feel a bit disappointed."