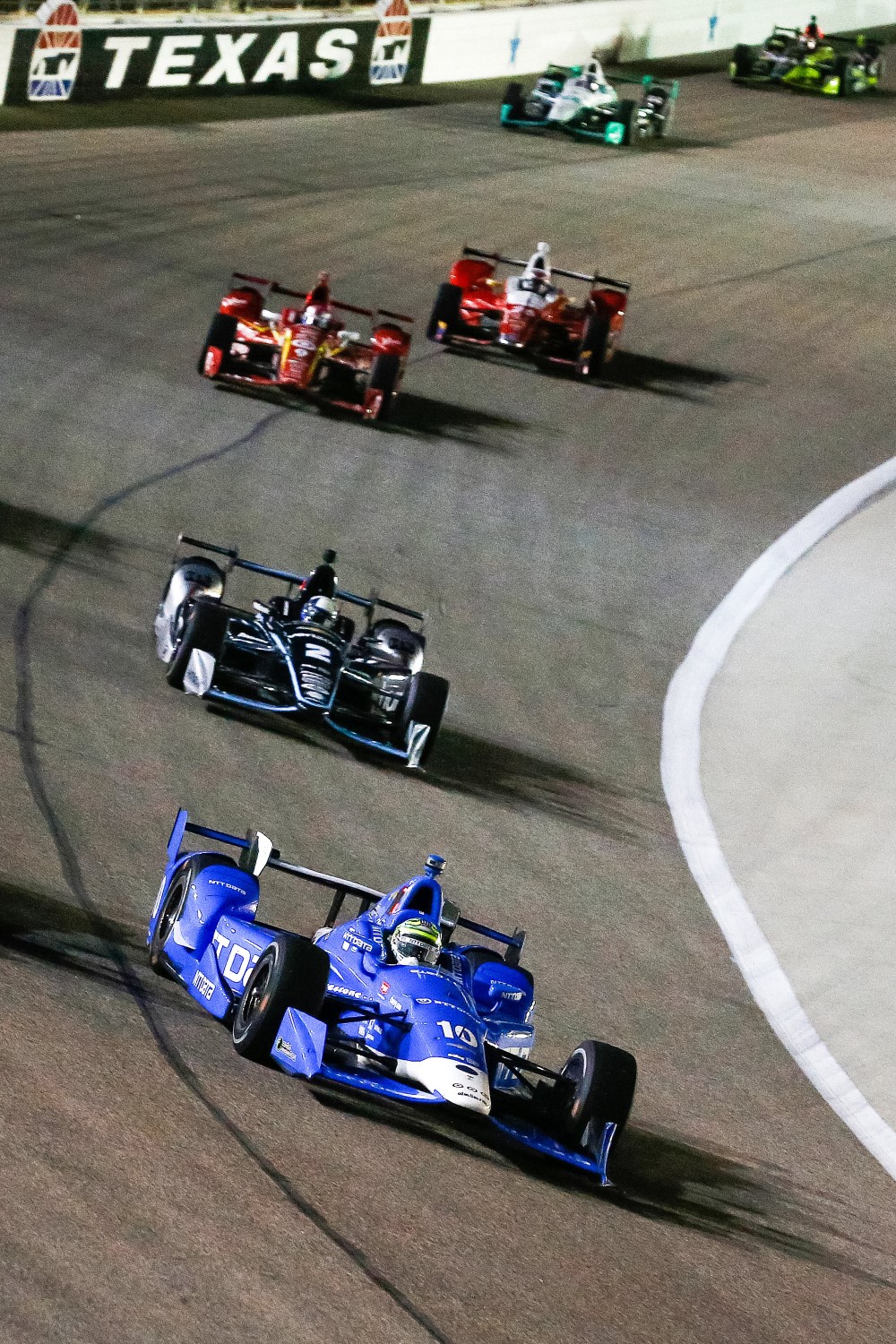 I'm going to do something a little different today.

Typically, in these postscripts I elaborate on a number of the subjects du jour in the Verizon IndyCar Series. However, given that I covered some of those in last week's Pocono Postscript, IndyCar's return to Texas was such an abbreviated affair, and I'll have a postscript after Watkins Glen, I figured this might be a good time to do something different.

Furthermore, Saturday evening's restart/conclusion of the Firestone 600 at Texas Motor Speedway brought a topic to the fore that has been hotly-debated in recent years: the style of racing IndyCar should pursue on high speed banked ovals.

Sure, Saturday's race was not the purest display of driving talent I've ever seen. Likewise, it became somewhat dull during the middle of the race, as the dominant James Hinchcliffe at one point lapped up to fourth place.

But was the insanity of three, sometimes four-wide action at 220 miles per hour in the closing laps, and Graham Rahal's last lap gutsy pass to edge Hinchcliffe by 0.008s for the win, an absolutely thrilling spectacle? No question!

And lets' give credit where credit is due. Rahal, Hinchcliffe, and 18 other drivers laid it on all the line Saturday evening. They laid it on the line absent the prospect of an enormous payday (Rahal netted a pathetic $30,000 for winning). In the case of Hinchcliffe, he laid it on the line a mere 15 months removed from an accident in which his legs were shish-kebabed together and he nearly bled to death. Yet there was the beloved Mayor running full throttle without hesitation and cars mere inches away on either side, battling for the win.

[adinserter name="GOOGLE AD"]Say what you will about the style of racing we saw (we'll get to the criticisms) but make no mistake: Saturday race's was a showcase of PASSION and watermelon-sized BALLS a special few possess. And that shouldn't be forgotten.

But as we know, it's rarely simple in the fractured, balkanized world of IndyCar. In fact, as we saw in the aftermath of Fontana last season, IndyCar drivers and fans can be bitterly divided over whether or not a certain style of racing should be enjoyed. Critics of the race noted Fontana drifted uncomfortably close to the disaster that was Las Vegas 2011. And undoubtedly, there was a collective sigh when all 20 drivers came home, limbs and lives intact Saturday evening.

So, what is it? Does the series continue to pursue such exciting shows, danger be damned? Or does such racing present an unacceptable level of danger that does not justify whatever excitement we may derive?

Working with the presumption that such racing is entertaining, yet also poses greater dangers than other races, let's explore this issue further using a question-statement/elaboration format.

Racing is dangerous and always will be. Can we stop being pansies, accept that and move on?

In the literal sense, yes, I accept the above premise that racing is dangerous and always will be. However the undertone of such a sentiment and its manipulation is where I have objections.

Yes, drivers assume certain risks but they don't assume any risk. If drivers assumed any risk, then why not instead of running Watkins Glen and Sonoma, we have Will Power and Simon Pagenaud wrestle lions to determine a champion? It would sure as heck be entertaining.

But the series has, in the aftermath of Vegas 2011, attempted to mitigate certain risks, most notably cars getting airborne. Running around in packs, however, increases the prospect of cars getting airborne, as it does the possibility of a T-Boning situation as we saw with Scott Dixon.

Granted, you could say this about nearly any IndyCar race save for the Indianapolis 500. Also, this isn't to say such racing marketed and packaged in a certain way couldn't help attract more fans. This is merely to say there is no evidence of this. Remember, when this style of racing was en vogue during the IRL days, audiences were on the consistent decline. The suggestion that such racing will appeal to people is rooted only in reactions to recent races such as Texas and Fontana, which may have some merit, but offer nothing empirical.

The simple fact is as things stand now Indy car drivers are assuming enormous risks racing in a vacuum.

To be clear, should the series continue to pursue this pack-style racing I am of the opinion that a future calamity is not a question of if, but when. And when it does happen the ‘perfect storm' type explanation will not suffice. Simply put, there are too many voices that have spoken up and too much evidence highlighting the dangers involved.

And if a care ever gets into the stands, rest assured, it's ALL OVER!

I'm not an engineer but I remain of the belief that a greater differential between cornering and straightaway speeds is crucial to reviving Indy car racing on ovals. Further, drivers cornering at decreased speeds will increase safety.

Of course, the M.O. in recent years has been to create speed differentials through tire wear. This has proven only a band-aid solution, as long green flag stints have become something of an exercise in tire conservation, something the average fan sitting in the stands does not comprehend.

In short: the tires should allow the drivers to race powerful, twitchy machines. The tires should not the racing itself. Cars with greater horsepower, less aero and an approach to tire construction focused on the racing would produce the most compelling show in my opinion.

If you insist on such racing, putting canopies on Indy Cars would mitigate some (although not all) of the dangers present.

AutoRacing1 has of course, long championed canopies on Indy cars. Also, as I wrote last week I'm shocked this even remains a discussion. However, canopies would lessen the head dangers that are involved in such racing. They would not lessen the side-impact or T-Boning issues.

Granted, cockpit protection and side-impact are not merely concerns confined to high-speed ovals. Still, But canopies would allow for greater protection, something indicated to Mark Cipolloni and I in a conversation we had with two multiple race-winning IndyCar drivers last season at Milwaukee – two weeks after the Fontana race.

I think as we've outlined INDYCAR has a rather complex issue on their hands. Unfortunately, many of the elements in place with the current car (low horsepower, high downforce, etc.) work counter to the goals of getting away from pack racing. Further, the car seems very weather sensitive. Remember, at both Fontana and Texas temperatures lower than what was originally anticipated created more downforce than the series wanted.

Of course, some will argue this is good thing. And I can't dispute that Fontana or Texas were thrilling shows. They were. Furthermore, you have to admire the courage shown by the drivers who placed themselves in the arena.

But I fear the series may be falling into the trap of allowing the outcome to dictate the narrative. Like the drunk who drives home safe without being caught by the cops, the outcome may create a false, and lethal, sense of security. Sadly, I think this is exactly the situation INDYCAR has on its hands. And I hope they're smart enough to recognize it.