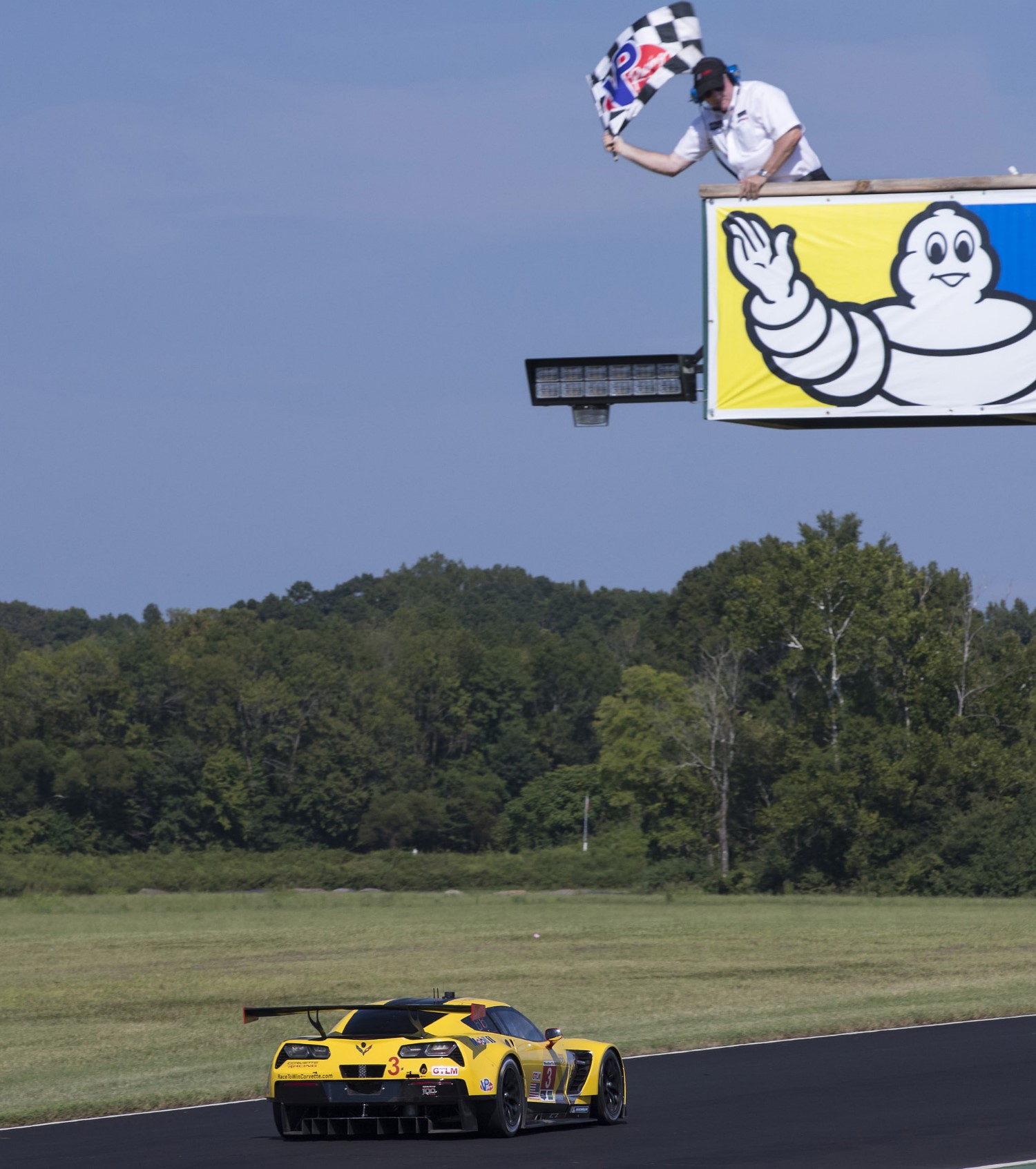 Danville, Va. — As strong as the two-car Chevrolet Corvette Racing C7.Rs have been in the IMSA WeatherTech SportsCar Championship GT Le Mans class, it's hard to believe that the No. 3 Corvette of Jan Magnussen and Antonio Garcia hasn't won since the Mobil 1 Twelve Hours of Sebring in March — of 2015.

"It's been a long time," Magnussen said. "We just haven't had things go our way."

But things did today in the Michelin GT Challenge at Virginia International Raceway, with Magnussen qualifying on the pole and driving a near-flawless first stint before turning it over to Garcia, who kept the car ahead of a powerful Ford GT, the No. 66 Ford Chip Ganassi Racing entry of Dirk Mueller and Joey Hand.

How close were the two cars? Garcia's best lap in the Corvette was 1 minute, 42.776 seconds. Mueller's fastest lap in the Ford GT was 1:42.771, just five thousandths of a second apart.

Third was the No. 912 Porsche North America 911 RSR of Earl Bamber and Frederic Makowiecki, which finished just ahead of the team Ford GT, the No. 67 car of Ryan Briscoe and Richard Westbrook. Until the very last lap, the No. 62 Ferrari 488 GTE of Risi Competizione and drivers Toni Vilander and Giancarlo Fisichella held the last spot on the podium, but contact between Vilander and Bamber sent the Ferrari off the track, and to a seventh-place finish.

Jan Magnussen insisted that while he was behind the wheel, he wasn't thinking of his son Kevin Magnussen's massive crash in his Renault in the Formula 1 race at Spa early this morning, "but when I was out of the car, it was certainly on my mind." Kevin walked away, albeit with a limp, but Jan said he had spoken to his son, and the injuries were very minor. This was the third straight win for a Corvette, but the last two were by the No. 4 car.

In GT Daytona — the Prototype and Prototype Challenge classes had the weekend off, as the spotlight turned to the GT cars — Madison Snow and Bryan Sellers absolutely dominated the weekend, with Snow qualifying on the pole, and giving Lamborghini its first win since it joined the WeatherTech Championship this year. "The car was just super-strong all weekend," Snow said.

[adinserter name="GOOGLE AD"]Snow and Sellers drive the No. 48 Castrol Lamborghini Huracan GT3 for Paul Miller Racing, and they were never seriously challenged for the win. Second in GT Daytona was the No. 9 Audi R8 LMS GT3 of Stevenson Racing's Lawson Aschenbach and Robin Liddell. Andy Lally and John Potter crossed the finish line third in the No. 44 Magnus Racing Audi R8 LMS, but were excluded from the final race results when a minimum ride height infraction was discovered in post-race technical inspection, moving the No. 6 Audi of Robin Liddell and Andrew Davis into the final podium spot.

The fastest time in the GT Daytona class was set by Spencer Pumpelly in the No. 16 Change Racing Lamborghini, which finished fifth.

Since the Audi and the Lamborghini are virtually the same under the skin, to say Virginia International Raceway seems to favor this particular chassis and engine package would be an understatement. Why? "The Lamborghini has a very high top speed," said winning racer Sellers. It brakes well, and works very well in higher-speed corners "of long duration," he said, all of which VIR delivers.

The only outsider to make the top five was the only Porsche in the GT Daytona field, which has had as many as four in recent races. The No. 23 Team Seattle/Alex Job Racing Porsche 911 GT3 R finished fourth in class with drivers Alex Riberas and Mario Farnbacher.

Despite multiple off-road excursions by nearly every team — which typically meant that they plowed through the newly-mown grass, then had to visit the pits to have the grass cleaned out of the radiator — the race went caution-free until the last six minutes of the race, when Oliver Gavin, in the No. 4 Corvette, went off course and hit the tire wall. He was able to drive away, but the resulting caution meant the race would end in a one-lap shootout, bad news for the No. 62 GTLM Ferrari, but the rest of the field was essentially unaffected.

It was one of the hottest days of the year at VIR — Michelin engineers pegged the track temperature at 133 degrees during most of the two-hour, 40-minute race. Drivers said that when they got off the line on the newly repaved track, it was extremely slick, and that's what caused so many cars to veer off the pavement. Adding to the problem: "The line got narrower and narrower as the race went on," said Garcia.

Standings at the top of the points didn't change: In GT Le Mans, Oliver Gavin and Tommy Milner of the No. 4 Corvette C7.R still lead, and in GT Daytona, it's the No. 63 Ferrari 488 GT3 of Scuderia Corsa and drivers Christina Nielsen and Alessandro Balzan.

And since Prototype and Prototype Challenge didn't race this weekend, Joao Barbosa and Christian Fittipaldi of the No. 5 Action Express Corvette DP take their Prototype lead to the next race — the Lone Star Le Mans September 14-17 at Circuit of the Americas in Austin, Texas — as do Renger van der Zande and Alex Popow, drivers of the No. 8 Starworks ORECA-Chevrolet in Prototype Challenge.

JAN MAGNUSSEN, NO. 3 MOBIL 1/SiriusXM CHEVROLET CORVETTE C7.R – OVERALL AND GTLM RACE-WINNER: "We were all pretty equal all day in the class. The Corvette Racing team did a great job with the tire pressures. We had a plan where we would be better from the middle of the stint and not so much in the beginning. It wasn't much fun early on with the tires but as things went on our Corvette got better and better. I'm super happy. It's our first win in a long time. We have had plenty of opportunities, so I'm really pleased and hopefully this starts a streak for us now!"

[adinserter name="GOOGLE AD"]WE TALKED EARLIER AND YOU THOUGHT THE FIRST STINT WAS SPECTACULAR, BUT WHAT DO YOU THINK ABOUT ANTONIO'S STINT? "It was a fantastic drive by Antonio. He kept the gaps and opened them a little bit. I know it got a little scary at the end with one lap to go. It scared the hell out of me. But he did a fantastic drive and always does."

WINNING FIRST RACE OF 2016: "Oh man! It's about time! It was a great job by the whole team all week. Green with one lap to go… I don't know what that was about; it scared the hell out of me. The No. 3 Corvette team has had a tough run this year and it's great to be back in the Winner's Circle."

ANTONIO GARCIA, NO. 3 MOBIL 1/SiriusXM CHEVROLET CORVETTE C7.R – OVERALL AND GTLM RACE-WINNER: "It was really hot and super close. It was a very difficult, tricky race. The racing line was super narrow; I think that's why we saw some mistakes at the end. I had a few up and downs in the race. Our pit stops were perfect. After the tire pressures went up and stabilized, the Corvette felt great. I was able to make a little bit of a gap in traffic but it went back and forth. It was just like qualifying except you are trying to save fuel. Luckily I was able to run a good pace and economy with our Chevy engine. I got a really good job on the restart and already had a good gap at the start-finish line. I'm happy for Jan and everyone at Corvette Racing. We have been so close so many times this year that I really think our No. 3 Corvette crew deserved it today."

YOU HAD TO SAVE FUEL AT TIMES AND THEN YOU SAW THAT FULL COURSE CAUTION AT THE END. FUEL WAS NO LONGER A CONCERN, I THINK IT WAS MORE ABOUT THE CARS BEHIND YOU? "Yeah, it was a very hard race. My team got me a three- to four-second gap and then it was a classic green/white/checkered. Not even green then white, it was like white and checkered. It was an amazing race and the Corvette was brilliant. So I just need to thank the whole Corvette team and Chevy. Corvette Racing did a fantastic job today. It really paid off to be out testing on Monday and Tuesday (at Road Atlanta). I have to say, because the car was fantastic."

OLIVER GAVIN, NO. 4 MOBIL 1/SiriusXM CHEVROLET CORVETTE C7.R – FINISHED NINTH IN GTLM: "It's obviously a disappointing way to end the day. We heard reports that there may have been oil or fluid down near the final turn so maybe that contributed to the incident. The Corvette C7.R is a very strong and well-built car, and we are always thankful for that. It seemed like today we got behind and never could catch up. That is how difficult it is in this championship. We are still thankful to maintain a points lead and will do whatever we can to protect that lead over the final two races."

TOMMY MILNER, NO. 4 MOBIL 1/SiriusXM CHEVROLET CORVETTE C7.R – FINISHED NINTH IN GTLM: "It's hard to pass and make up ground. I kind of got hung out at Turn One and didn't have much grip. I had to play some avoidance also with a couple of the cars in there and had some junk on my tires. My first lap free from the pitlane was a case of me going too fast and got loose. The car would understeer behind everyone else, and I didn't realize how loose it was. It was a mistake on my part."

DOUG FEHAN, CORVETTE RACING PROGRAM MANAGER: "This race today was victorious today on two different levels. Obviously for the Corvette Racing team, Jan and Antonio to bring the No. 3 Corvette home first after battling all day against the best competition of the world speaks very highly of not only the crew work but the engineers that put together a setup that they could race for an entire day in this extreme heat. That should never be overlooked. On another level, I think this is one of the best races we have had since the sports car merger in 2014. The Balance of Performance was very, very tight. You only had to look at the practice times, qualifying or the race times to see that any of the cars that started the race today had the capacity to win. And that's what makes great racing. So we were all winners today – everyone who participated today in the IMSA WeatherTech SportsCar Championship."