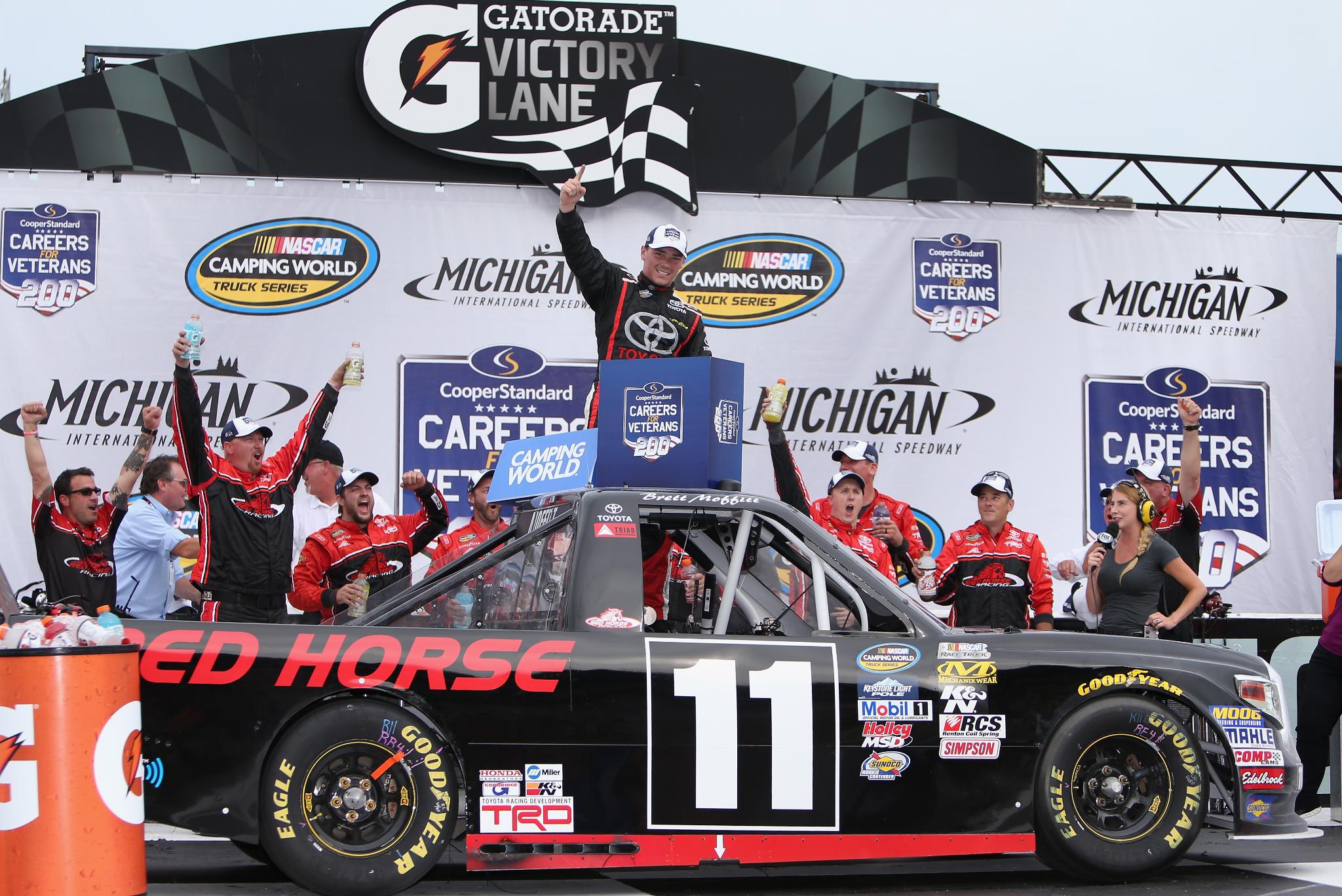 But in Saturday's Careers for Veterans 200 at Michigan International Speedway, Moffitt picked the perfect time to take the point for the first time.

Powering around Red Horse Racing teammate Timothy Peters and five-time series winner William Byron off the second corner of the final lap at the two-mile track, Moffitt held off Peters by .098 seconds to win a NASCAR national series race for the first time.

Moffitt's victory, however, left Shane Huffman, Peters' crew chief, slapping his seat on the pit box in frustration. Peters, who led a race-high 42 laps, could have locked himself into the inaugural Camping World Truck Series Chase with a victory. Running a limited schedule this season, Moffitt is ineligible for the championship this year.

[adinserter name="GOOGLE AD"] But Moffitt made no apologies for taking advantage of the opportunity that presented itself when Byron pushed Peters into Turn 3 on the white-flag lap, cut to the inside and slowed both trucks down. Moffitt cruised around the outside off Turn 2 on the final lap and kept Peters behind him.

"I'm here to win," Moffitt said. "I said it earlier and I'll say it again. I'm not going to wreck him (Peters) for it. I'm going to race him clean because I know he needs to get in the Chase, but this team needs to win and these guys deserve to win.

"That's what we come to do, and our partners at Toyota want to do the same, and we got it."

Daniel Hemric passed Byron on the last lap to come home third, with Byron following in fourth and Cameron Hayley in fifth.

The good news for both Peters and Hemric was the wide margin both drivers opened over their closest pursuers in the race to make the Chase. Though winless this year, Hemric and Peters lead Cameron Hayley by 55 and 47 points, respectively, in the battle for the last two Chase spots.

If no new winner surfaces in the final two regular-season races, both Hemric and Peters are highly likely to qualify on points.

"It's a good day for Red Horse Racing," Peters said. "Congrats to Brett Moffitt. One-two finish. I wish we were ‘one,' but all in all, the company brings the trophy back. The 9 (Byron) locked onto our bumper there in Turn 2 and pushed us really hard down into Turn 3.

"We had to do all we had to do to stay in front. … Tough to swallow right there, but it felt good to run the way we did all day."

Both Cole Custer and Tyler Reddick entered the race needing to win to make the Chase. Reddick's Ford bounced off the side of Johhny Sauter's Chevrolet on Lap 70 and sustained heavy damage during contact with the Turn 3 wall.

Custer, however, had the lead for a restart on Lap 84, only to lose control and spin into the Turn 4 wall, grazing the left rear of Moffitt's No. 11 Toyota in the process.

"We didn't have the raw speed of the guys up front, but it drove pretty well, and it was hard to keep those guys off of me," Custer said. "The 11 (Moffitt) stopped pushing me — which it's his right to do that.

"We were kind of losing the 17 (Peters) there. He (Moffitt) went to the outside and I started getting tight. Once he got on my door, I got loose and over-corrected it. I just hate it for my guys that brought a great truck."

Like Hayley, Custer and Reddick will have two more chances to force their way into the Chase by winning one of the final two regular-season races.