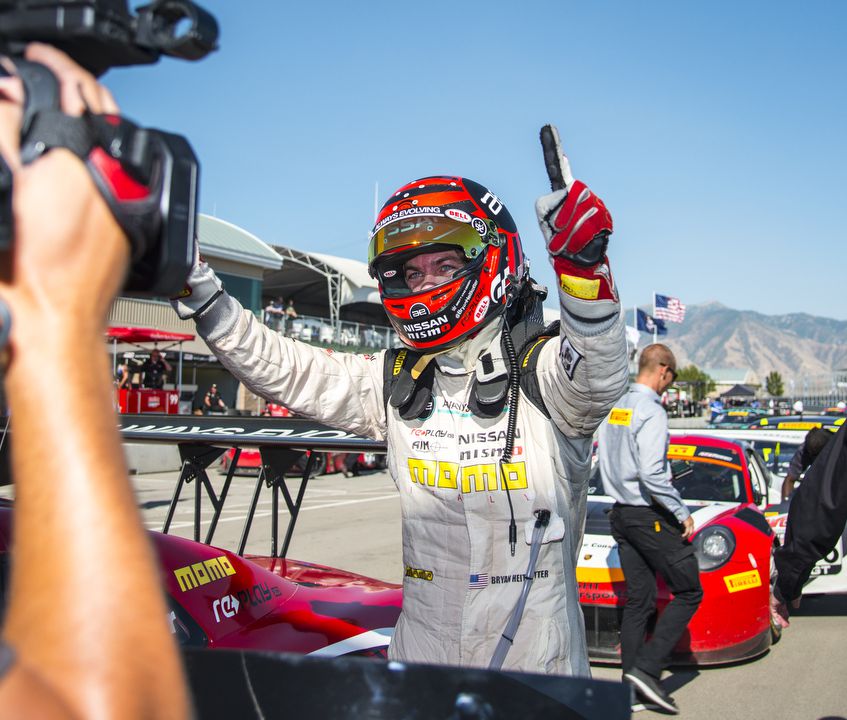 Heitkotter, who gained notoriety when he won the Nissan GT Academy scholarship in 2011 on the Gran Turismo 5 video game, vaulted to the lead Sunday from his No. 2 starting spot and never looked back as second place Adderly Fong and third place Patrick Long attempted to apply pressure on the Nissan driver in the middle of the 28-lap, 50-minute GT main event with temperatures reaching near triple digits in the Tooele Valley southwest of Salt Lake City. Fong, the Hong Kong driver of the No. 88 Bentley Team Absolute Bentley Continental GT3, closed to within .432 seconds on lap 12 before Heitkotter opened his advantage in traffic at the halfway point of the race.

At one point, Heitkotter, Fong and Long, the Manhattan Beach, Calif., veteran in the No. 58 Wright Motorsports Porsche 911 GT3 R, were only a few car lengths apart as the 2011 PWC GT champion moved under a second from the Nissan driver. But Heitkotter put in a tremendous lap on the 17th circuit to stretch his margin by an extra half second. Then Heitkotter took advantage of traffic in the back section of the 3.048-mile, 15-turn outer circuit at Utah Motorsports Campus. The Nissan racer extended his gap to nearly two seconds over Fong and Long as those two fought for the No. 2 spot.

Ironically, both GT races in Utah saw the same 1-2-3 finish in the GT division. Pole sitter Michael Lewis of Laguna Beach, Calif., drove the No. 98 Calvert Dynamics/Curb-Agajanian Porsche 911 GT3 R to the fourth position Sunday, just 4.25 seconds back of Heitkotter. Rounding out the top-five in GT was sports car veteran Jon Fogarty of Bend, Ore., who drove the No. 99 Gainsco Auto Insurance "Red Dragon" McLaren 650S in a tremendous fight with Mid-Ohio winner Michael Cooper of Syosset, N.Y., in the No. 8 Cadillac Racing Cadillac ATS-V.R.

Long's third place finish Sunday moves him into the GT point lead after Saturday's pole-winner Alvaro Parente of Porto, Portugal suffered a tough weekend in the No. 9 K-PAX McLaren 650S with a DNF on Saturday and an 11th place Sunday.

"The way the race played out at the start, it really worked to my advantage," said Heitkotter, 35. "I got a good start, the guys behind me started battling a little bit so I was able to open the gap on the first couple of laps. It was constant pressure from Adderly (Fong). He was really strong and I know his car is good on the long runs; same with Pat Long right behind him. I think the track was pretty similar to yesterday – very little breeze, hot and greasy – and we made the car just that little bit better in the high-speed corners today. Traffic actually worked out pretty well for me. When you're the leader and you catch traffic first, you don't know if they're looking in the mirrors or if they're ready for you to come up."

[adinserter name="GOOGLE AD"]Heitkotter said, closing, "This weekend is what I've dreamed for my whole life. Since I was a little kid I always dreamed of being a racing driver and winning races. It took a while but here I am now and I'm racing with some of the best in the world. It's a world-class racing series with a lot of top teams and drivers, so to be up front in both races, get P1 and close the deal, two in a row – it feels really good."

"I managed to stay with Heitkotter from the start," said Fong. "I think the guys in the fourth and fifth rows got hung out. So we managed to have a clean gap into turn one. I tried to hold the inside line because looking from yesterday it would all go outside of turn one. I saw everything spaced out quickly. I tried to attack Bryan as best I could and see if he made any mistakes which he didn't. Pat put on a lot of pressure towards the end, I got up on Bryan and got into his aero-wash. I got up on the GT Cup traffic and it really slowed me down but a great race. I'm really happy."

"A really solid weekend," Long stated. "It comes timely after a rough Mid-Ohio that we are going to put behind us. This was about longevity, both yesterday and today. Really yesterday, after getting hit by some very enthusiastic and optimistic drivers. We didn't have a corner of the car that we did not get stuffed into. So to come back today with a clean race and back it up two podiums and the championship lead feels really good."

In the GTA category, Martin Fuentes of Mexico City, Mex., set a class win record with his ninth victory of the 2016 season Sunday in the No. 07 Scuderia Corsa Ferrari 458 Italia when early leader Frankie Montecalvo of Highlands, N.J., had difficulty in his No. 66 DIME Racing Mercedes AMG SLS GT3. Michael Schein, a winner this year at CTMP, Lime Rock, Road America and Mid-Ohio, pressured Fuentes to the checkered flag in the No. 16 Wright Motorsports Porsche 911 GT3 R before settling for second, just 0.240-seconds behind the Ferrari driver. Veteran Brent Holden of Newport Beach, Calif., notched a podium finish Sunday in the No. 14 GMG Racing Porsche 911 GT3 R.

"Yeah, (Montecalvo) lost pace at the end of the race," said Fuentes. "I was catching up to him and my team was telling me that he was losing pace, so I was just concentrating on catching Frankie. Once I passed him, I was just trying to keep up the speed but I saw that Mike (Schein) was catching up as well so it was a very tough race for us, and for the team, and we were just happy to pull another victory. We're so happy (to set the nine-win record), the team did a great job. We just tried to find a good pace and we knew that at the end of the race that we would struggle, but we pulled it through with teamwork. It was, of course, a lot hotter (today) but my car was handling really bad on the back, with the rear tires. So I'm just happy we finished another race, no mistakes, and ended with another victory."

"McKay (Snow) gave me a run for the money," said Udell. "He pulled away from us at the very beginning and they're saying he might have bent a shock in The Attitudes back there. That's really a problem on these cars. Through a lot of preparation from the guys at Global Motorsports Group we were able to keep the car together in one piece and finish on top again. It's just another great finish for the GMG Racing Porsche. (When Snow had issues), I was able to capitalize on that and I was able to put my head down and run away. Not really run away, since Sloan (Urry) was right on me for a long time."

In GT competition, the fast lap belonged to Adderly Fong, in the No. 88 Bentley Team Absolute Bentley Continental GT3 with a 1:49.370 lap.

[adinserter name="GOOGLE AD"]Frankie Montecalvo, in the No. 66 DIME Racing Mercedes AMG SLS GT3 lapped the circuit in 1:50.433 to capture the fast lap of the race in GTA.

The award winners for Round 17 GT/GTA, Round 16 GT Cup race at Utah Motorspots Campus were awarded as follows:
The Optima Batteries Best Start award was given to GT No. 2 Kyle Marcelli in the CRP Racing Audi R8 LMS GT3 for his five-position gain at the start. The KIA Turning Point of the race was issued for the incident where GT Cup No. 20 Sloan Urry in the TruSpeed Autosports SecurityNational Mortgage/Avasis/TruSpeed Autosport Porsche 911 GT3 Cup car went off-course at turn 15 with only seven-minutes remaining in the race, attributed to a mechanical issue. The Cadillac ATS-V Best Move Award was given to Heitkotter in the No. 05 Nissan GT-R NISMO GT3 for his move on GT No. 98 Michael Lewis in the Calvert Dynamics/Curb-Agajanian Porsche 911 GT3 R. The MotorTrendOnDemand.com Clean Pass Award was given to GT Cup No. 17 Alec Udell in the GMG Porsche 911 GT3 Cup for his pass on GT Cup No. 56 McKay Snow in the Wright Motorsports GT3 Cup car in lap 20 at Turn 11 to take the lead. The VP Racing Fuels Hard Charger Award was issued to Alvaro Parente in the No. 9 K-PAX Racing McLaren 650S GT3 for his six-position gain through the race.