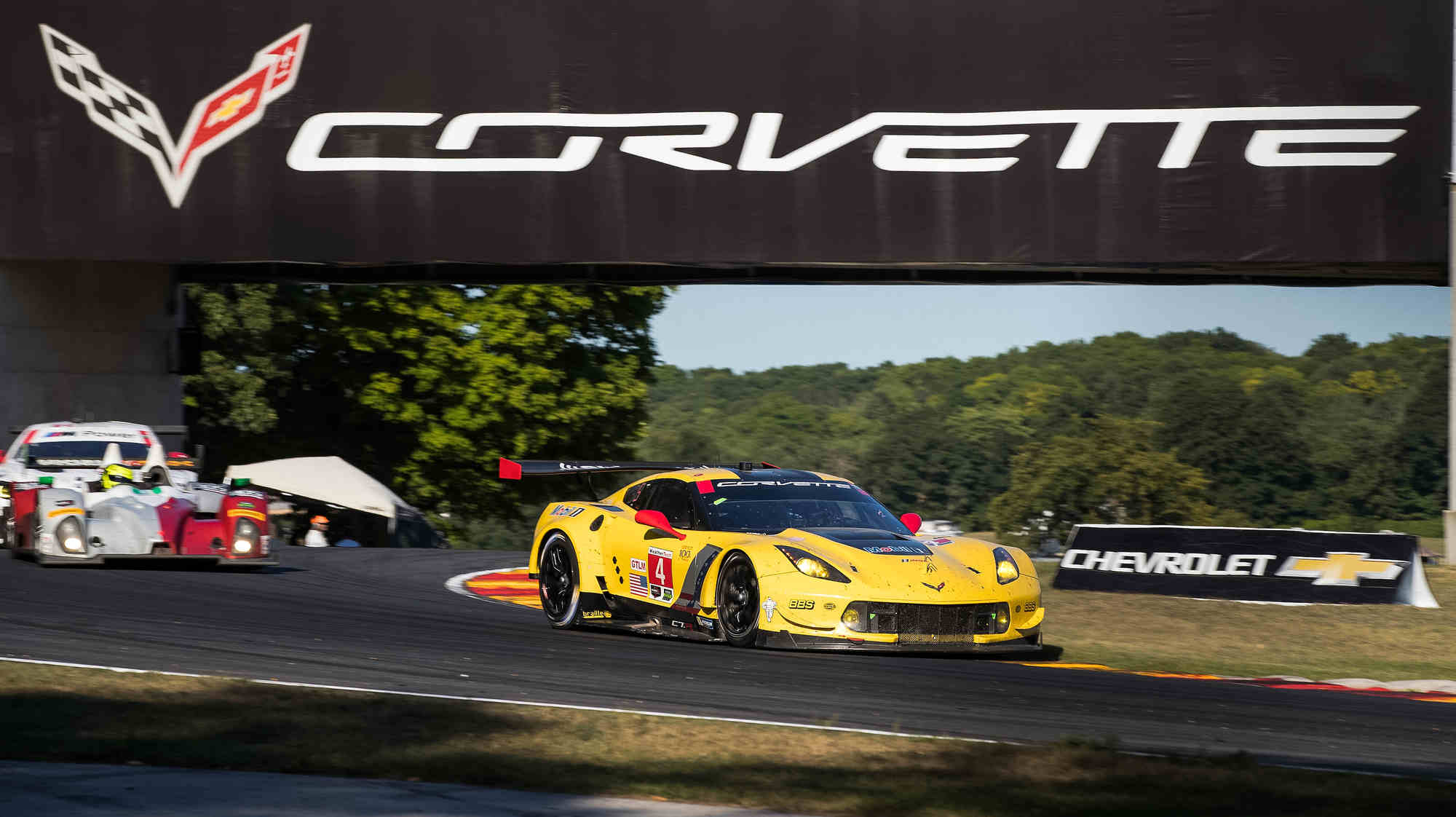 Corvette Racing Kicked off Journey To 200 Wins With Surprise Victory

If there’s one lesson to be learned from the race, it’s that we should stay in our seats, or stay tuned if you’re watching on TV, for those last 10 minutes.

In case you missed it: The previous race, at the 1.5-mile Lime Rock Park, was dominated by the two Chevrolet Corvette Racing C7.Rs, with the team scoring its 100th win and 60th one-two finish. Then comes the 4.0-mile Road America, and the Corvettes seem to barely be a factor, qualifying sixth and seventh, more than a second off the pace of the polesitting No. 66 Ford Chip Ganassi Ford GT of Dirk Mueller and Joey Hand.

[adinserter name="GOOGLE AD"]And that’s pretty much how the race went until the final caution flag, which flew with about 12 minutes to go for a wreck between two Prototype Challenge cars. Tommy Milner, sharing the No. 4 Corvette with Oliver Gavin – the slower of the two Corvettes in qualifying – lined up in fifth place when the final green flag came out with about five minutes to go. Richard Westbrook, in the No. 67 Ford GT, led the class at the start, just ahead of the No. 62 Ferrari 488 GTE of Toni Vilander, when the third-place car, the No. 911 Porsche North America Porsche 911 RSR of Nick Tandy, tried an improbable inside pass on both cars and spun out.

By then, Milner had passed Tandy’s teammate, Fred Makowiecki in the No. 912 Porsche for fourth, then found himself in third with the No. 911’s spin. Then Vilander’s Ferrari spun after making contact with the No. 55 Mazda Prototype of Tristan Nunez, and suddenly Milner was in second place, but well behind Westbrook in the No. 67.

And that’s where Milner figured he’d finish, well ahead of where he expected. But to his surprise, he quickly closed up on the Ford GT and passed Westbrook for the lead, and the victory. Westbrook at the Ford team were crestfallen – something happened that caused the engine to lose some of its power, and, said a Ford spokesman, “We knew we were a sitting duck."

“I just had nothing on the restart," Westbrook said, who held on for second.

“I’m speechless," Milner said. “I know everybody says that, but literally… With two laps to go, there is nothing more that you could ask for than everyone in front of you, and a Corvette underneath you!"

Milner and Gavin came to Road America with the points lead, just ahead of Westbrook and co-driver Ryan Briscoe. Had Westbrook managed to stay out front, the points battle would have tightened considerably, but the teams left Wisconsin with Milner and Gavin out front with 264 points, Westbrook and Briscoe in second with 251 points. With three races left for the GT Le Mans cars, that is, by no means, a comfortable lead for the Corvette.

Worth mentioning, too, in regard to Chevrolet’s dream day: It was enhanced considerably by a 1-2-3 finish for the Corvette Daytona Prototypes, led by the winning team, the No. 31 Action Express Whelen car of Dane Cameron and Eric Curran, followed by the No. 5 team Action Express entry, and then the No. 10 Wayne Taylor Racing Konica Minolta car.

AND ONE MORE CORVETTE MENTION: The weekend’s annual auction for Camp Anokijig, a youth camp located a few miles from Road America, raised more than $26,400 to benefit the camp. Corvette Racing crew chief Dan Binks spearheads the event – he is part owner of the property with his father, and both are former campers at the 90-year-old facility.

The auction was held at Road America’s Corvette Corral, and featured Corvette Racing and Chevrolet memorabilia, spare bodywork and parts from past race cars. Corvette Racing Program Manager Doug Fehan served as the auctioneer with assistance from Binks, Corvette Racing/Team Chevy team members and many of the Corvette Corral volunteers. The 356-acre Camp Anokijig, which is Native American for “We Serve", hosts more than 11,000 campers each year.

ONE MORE HEARTBREAK FOR MAZDA: The two-car Mazda Prototype team has been battling for a win for nearly three years now, the first two years with a diesel engine, and now that the team switched to a gasoline-powered four-cylinder at the start of 2016, they have often been the fasted car on the track.

That was the case at Road America, where Jonathan Bomarito qualified the No. 55 car on the pole, more than a second ahead of the No. 5 Action Express Corvette DP. Bomarito led early on, then turned the car over to Tristan Nunez. But a gamble on pit strategy didn’t pay off, and the No. 55 ended up in fifth. Even worse was the last-place finish of the No. 70 team car, which Tom Long had qualified in fourth: The car managed just six laps before a bad oil pump ended the day. Mazda has two more races left this season to score that first win. “We know the cars have the pace," said No. 70 co-driver Joel Miller, “but we just have to look ahead and figure how to get them to the end."

PROTOTYPE CHALLENGE POINTS BATTLE TIGHT: A late-race crash for the No. 8 Starworks ORECA-Chevrolet of Renger van der Zande and Alex Popow cost the current Prototype Challenge points leaders a good finish, but it made the day for the race-winning No. 52 PR1/Mathiasen entry of Tom Kimber-Smith and Robert Alon.

[adinserter name="GOOGLE AD"]The team’s second win of the season put Alon and Kimber-Smith just seven points behind the No. 8 car. Kimber-Smith led the final 39 laps en route to the checkered flag: “We rolled the car off the truck at the start of the weekend, and it was pretty quick during all of the sessions. All credit goes to the team there for all the hard work they’ve put in to get the car set up so nicely for Road America," he said.

ALL GT AT VIRGINIA INTERNATIONAL RACEWAY: The Prototype and Prototype Challenge teams get the weekend off on August 26-28, when the WeatherTech Championship turns the spotlight on the GT cars, (GTLM & GT Daytona) as well as the other IMSA series – the Continental Tire SportsCar Challenge for the Oak Tree Grand Prix, and the Porsche GT3 Cup USA and Lamborghini Super Trofeo series. The Mazda MX-5 Cup, a series that many IMSA regulars got their start in, will also be in action at VIRginia International Raceway, making for arguably the most action-packed sports car weekend so far this year.

The event also attracts a lot of car clubs – walking through the car corrals in the parking lot can be almost as exciting as touring the race paddock. Log onto VIRnow.com or IMSA.com for more information on the Michelin GT Challenge at VIR.