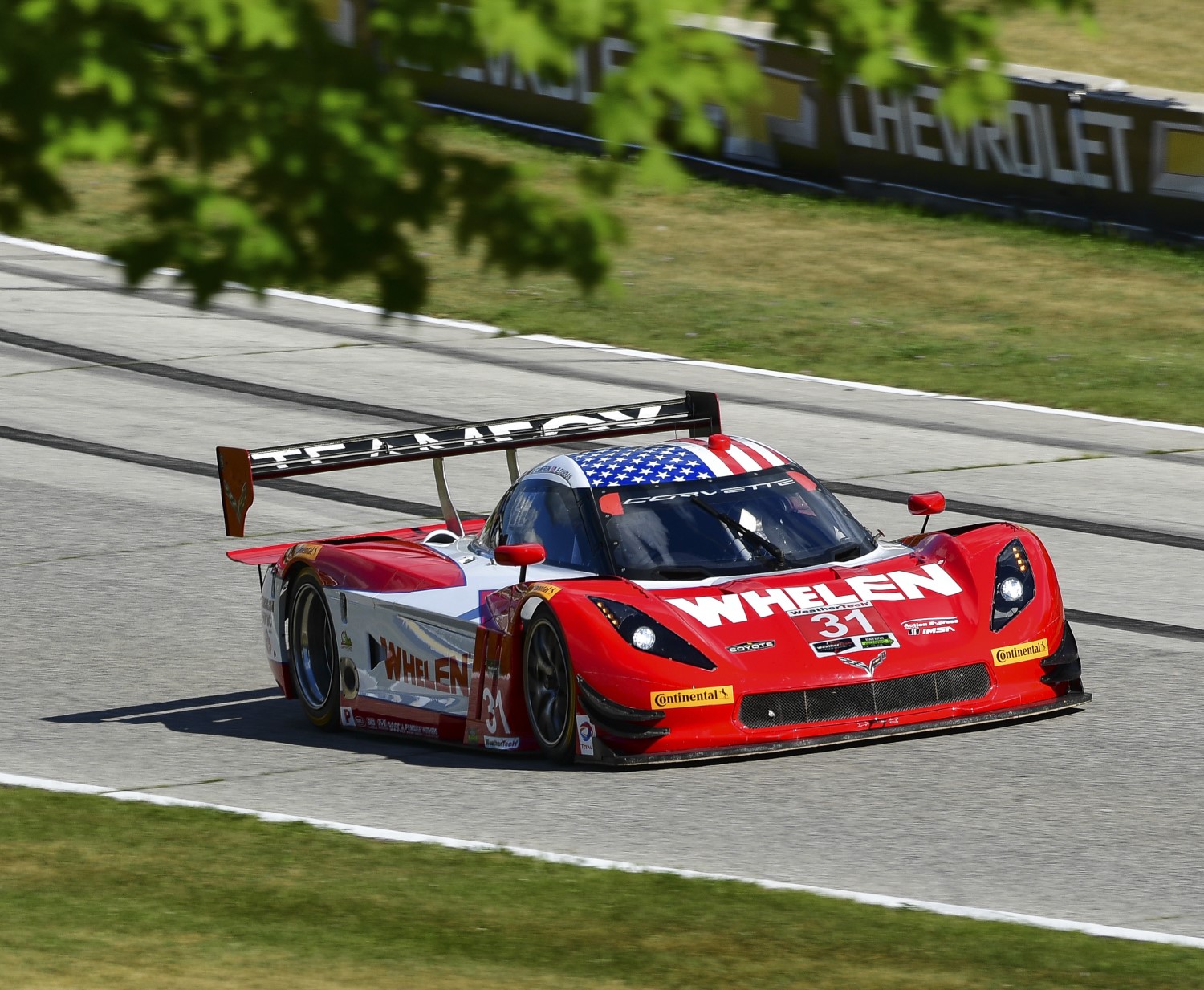 The two-car Action Express team finished the Continental Tire Road Race Showcase at Road America first and second, just as they did at the last Prototype race at Canadian Tire Motorsport Park. And the one before that, at Watkins Glen International.

Three straight races, three straight one-two finishes for the team and their Chevrolet Corvette Daytona Prototypes. Sunday, it was the No. 31 Whelen Engineering car of Dane Cameron and Eric Curran, finishing 0.626 seconds ahead of the No. 5 Mustang Sampling entry of Christian Fittipaldi and Joao Barbosa.

The win for the No. 31 tightened up the season points battle, elevating the team to just one point behind the No. 5 car. With only two races left for the Prototypes (three for the GT cars), the 2016 championship should come down to the season-ending Petit Le Mans at Road Atlanta Oct. 1.

Early on it looked like it might finally be Mazda's day — Jonathan Bomarito put the No. 55 on the pole, qualifying more than a full second ahead of Fittipaldi, with Tom Long close behind in fourth in the No. 70 Mazda team car. But after just six laps, Long steered his car to the pits and straight behind the wall, victim of an oil pump failure. It was an issue that had occurred the day before, but the team thought it was fixed.

[adinserter name="GOOGLE AD"]Bomarito stretched out a comfortable lead, and turned the car over to Tristan Nunez in solid shape for the remainder of the race. But a yellow flag on Lap 28 — there were three caution flags, all caused by Prototype Challenge cars spinning off the track — the No. 55 Mazda didn't pit, surprising all the other Prototype cars, which did.

It threw the Mazda off sequence, and when the car finally did pit, the No. 55 was well back in the field, eventually finishing fifth, even though it was the fastest car in the race, with a best lap of 1 minute, 55.458 seconds. Not pitting with the other cars seemed like a "pretty risky move for them," Fittipaldi said, and that's how it turned out.

Finishing third in Prototype was another Corvette DP, the No. 10 Wayne Taylor Racing Konica Minolta entry, driven by brothers Ricky and Jordan Taylor. They remain third in points, but they'll need luck — good luck for them, bad luck for the Action Express cars — to move up any higher.

In Prototype Challenge, simply remaining on track guaranteed a good finish, and that's what happened to the winning No. 52 PR1/Mathiasen ORECA-Chevrolet of Tom Kimber-Smith and Robert Alon. They moved up in the championship standings, with 286 points, compared to 293 points for the leading No. 8 Starworks Motorsport car of Renger van der Zande and Alex Popow.

"They had to have a bad race if we were going to have a shot at the championship," Alon said, "And that's what happened."

Van der Zande and the No. 85 JDC-Miller MotorSports car of Stephen Simpson collided, bringing out the third and final yellow flag with twelve minutes left in the two-hour, 40-minute race, dropping the No. 8 to a sixth-place finish.

Second in Prototype Challenge was the No. 54 CORE autosport car of Colin Braun and Jon Bennett. Third was the polesitting No. 38 Performance Tech car of James French and Kyle Marcelli.

The finish in the GT Le Mans race was the most surprising development in the race — the No. 66 Ford Chip Ganassi Ford GT of Dirk Mueller and Joey Hand qualified on the pole, but suffered suspension damage on lap three, and was never a factor.

That left it to the team car, the No. 67 of Richard Westbrook and Ryan Briscoe, to carry the flag for Ford, and they took it straight to the front, and stayed there until the last few minutes of the race.

The No. 4 Corvette Racing Chevrolet Corvette C7.R of Tommy Milner and Oliver Gavin was mired in fourth, but suddenly the No. 911 Porsche North America car of Patrick Pilet tried an inside pass of the No. 67 and the No. 62 Ferrari of Toni Vilander, and spun.

Milner, driving the No. 4, then got by the Ferrari, which spun in Turn 1 on the second-to-last lap, and was looking at a second-place finish to the No. 67 Ford GT.

But Milner passed the No. 67 like it was standing still — which it sort of was, as Ford reported later that the car had, for unknown reasons, lost quite a bit of power, and Milner won over Westbrook and the Ford GT by .730 seconds.

[adinserter name="GOOGLE AD"]At the last race, at Lime Rock Park, the Corvette team scored its 100th win since the team formed in 2000, and they had no idea that number 101 would come so quickly. Said Gavin: "Everyone on the team was standing there in a little bit of disbelief."

The No. 4 car remains in the season points lead, and the No. 67 team remains in second, but the gap is considerably larger than it would have been had the No. 67 been able to stay ahead for the final five minutes, which is all the time there was after the green flag flew following the final caution flag.

Finishing third behind the Ford GT was the No. 100 BMW Team RLL M6 GTLM of Lucas Luhr and John Edwards.

And in GT Daytona, after a miserable race at Lime Rock, the No. 33 ViperExchange.com Dodge Viper GT3-R qualified fourth at Road America, and steadily worked its way to the front, with driver Jeroen Bleekemolen, who co-drivers with car owner Ben Keating, winning the class by 1.762 seconds over the No. 73 Park Place Porsche 911 GT3 R of Patrick Lindsey and Joerg Bergmeister.

Third was the No. 63 Scuderia Corsa Ferrari 488 GT3 of Alessandro Balzan and Christina Nielsen, who retain a healthy points lead.

Next up for the IMSA WeatherTech SportsCar Championship: The Michelin GT Challenge at Virginia International Raceway August 26-28. It features the GT Le Mans and GT Daytona classes — the Prototype and Prototype Challenge classes rejoin the series for the final two races at Circuit of The Americas in Texas, and Petit Le Mans at Road Atlanta.

OLIVER GAVIN, CORVETTE RACING NO. 4 MOBIL 1/SiriusXM CHEVROLET CORVETTE C7.R – GTLM RACE WINNER: “An extraordinary finish! It was an amazing, amazing job by Tommy, the crew … the strategy at the end there! It just seemed like the car came alive. We made a change on that last stop, and it just brought the car to life. That was what we were missing in the first part of the race. I don't think Tommy can believe it. We were looking at fifth, then that caution came and it mixed everything up. There was contact and crazy stuff happening. It is just wonderful. This is such an amazing result for us and it is big, big, big for the championship. I’m so thrilled!"

TOMMY MILNER, CORVETTE RACING NO. 4 MOBIL 1/SiriusXM CHEVROLET CORVETTE C7.R – GTLM RACE WINNER: “I’m speechless! I know everybody says that, but literally… We did not have a very good car at the start; it was super loose. But Chuck (Houghton, No. 4 Corvette engineer) made a great change there at the very end; new tires, a bit more wing in the Corvette and it was the best race car I have ever had. I know I said that at Sebring, but this one somehow topped it. This is the best race car I've ever had in my life right there. At the end there, it seemed like the other guys couldn't get their tires up to temp, and mine were ready to go and were there. With two laps to go, there is nothing more that you could ask for than everyone in front of you and a Corvette underneath you!"

ERIC CURRAN, ACTION EXPRESS RACING NO. 31 WHELEN ENGINEERING/TEAM FOX CORVETTE DP – PROTOTYPE WINNER: "This is good stuff. It is awesome to win two races in a row in the IMSA WeatherTech SportsCar Championship. I’m really happy. We have three podiums in a row, and three races in a row for Action Express and one-two finishes. It’s pretty awesome stuff. It helps Dane (Cameron) and I in the championship. It is going to jump us up to our teammates in the No. 5 car. Dane did an awesome job all day today. The Whelan Engineering Corvette was spot-on. It wasn't a perfect race by any means. We had a few little issues. But at the end of the day, it all worked out for us. I don't know where we stand in the points, but it has to be close now. It's been a good year for us, we are trying to win a championship here. It’s fun to have another win."

DANE CAMERON, ACTION EXPRESS RACING NO. 31 WHELEN ENGINEERING/TEAM FOX CORVETTE DP – PROTOTYPE WINNER: “It was certainly a really tough one here all day. Tire wear is pretty high here. Fuel consumption is high. The competition level in Prototype in certainly really top-notch right now. It is really tough to win races in this category so I’m really proud to be in this Action Express Whelen Corvette Daytona Prototype and to get two in a row. Three one-two finishes in a row for Action Express is something really special. I'm proud to be a part of it. There are two more big races to push forward for the championship, so we will see what happens."