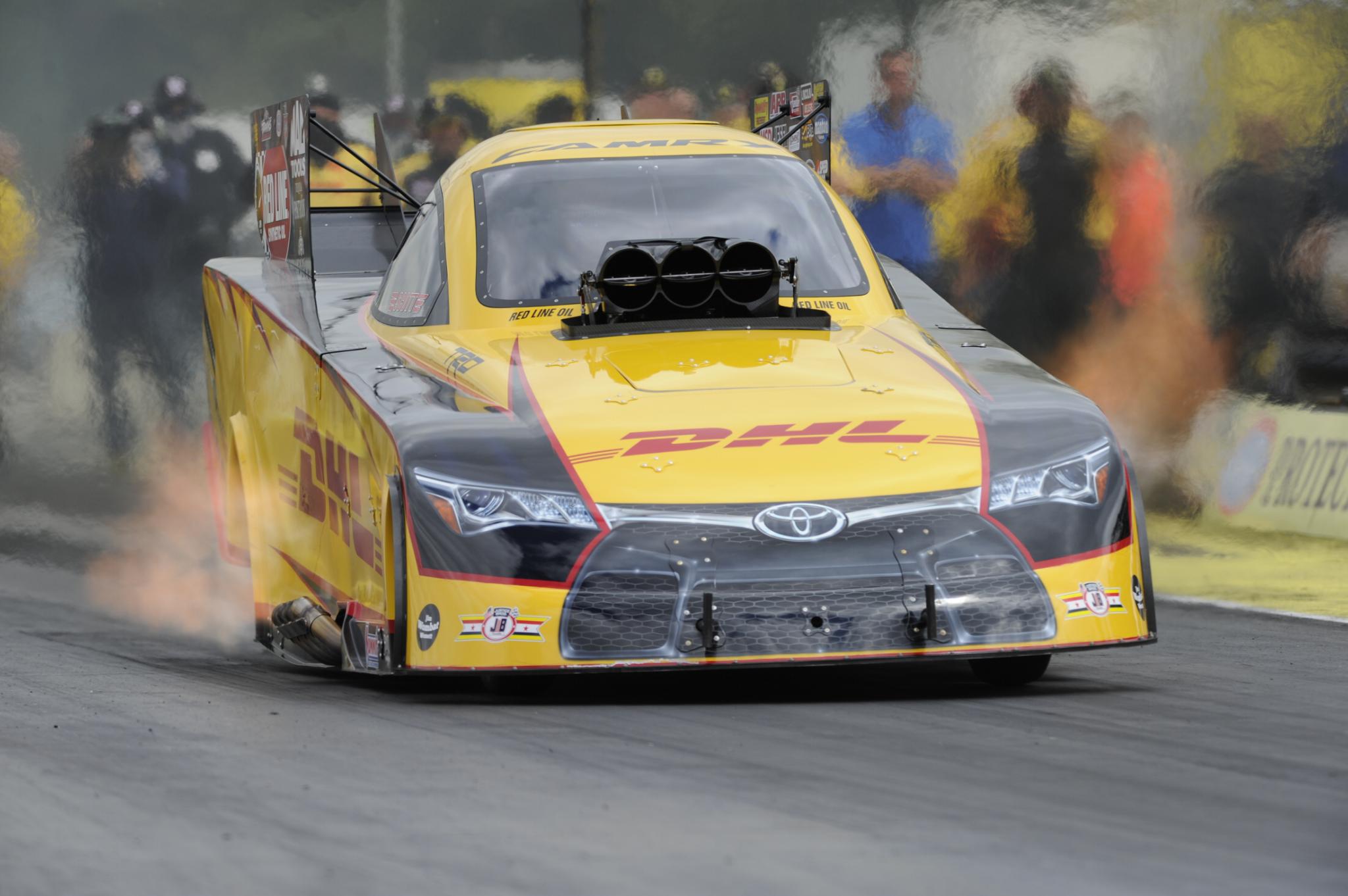 Del Worsham reset the Funny Car elapsed time national record twice on Saturday en route to claiming the No. 1 qualifier at the Protect the Harvest NHRA Northwest Nationals presented by Lucas Oil at Pacific Raceways just outside of Seattle.

It was an extraordinary day for the entire Funny Car class, as it featured the top-five quickest passes in category history.

Tony Schumacher (Top Fuel) and Vincent Nobile (Pro Stock) also were qualifying leaders in their respective categories at the 16th event of 24 on the 2016 NHRA Mello Yello Drag Racing Series schedule. The Protect the Harvest NHRA Northwest Nationals presented by Lucas Oil is the final of three stops on the famed NHRA Western Swing.

Worsham, the reigning Funny Car world champion took full advantage of good weather conditions during Saturday's first session to reset the elapsed time national record with a 3.841-second pass at 330.15 mph in his DHL Toyota Camry. Then, in the day's second session, Worsham notched the quickest Funny Car pass in NHRA history with a 3.832 at 330.88 to again reset the elapsed time national record.

[adinserter name="GOOGLE AD"]With the effort, Worsham claimed his second consecutive No. 1 qualifier, third of the season and 20th of his career. This is the first time he has claimed back-to-back top qualifiers in Funny Car. Worsham will face Tim Gibbons in the first round of eliminations, which will be shown live on the FOX national broadcast channel on Sunday from 4 to 7 p.m. ET.

"We brought this car out at Denver and this thing has just been on fire," said Worsham, who has victories at Seattle in both Funny Car (1999) and Top Fuel (2011). "The car ran great numbers at Denver, went to Sonoma and qualified No. 1, and came here to Seattle and ran record times. It's coming together at the right time of the year, but tomorrow is when it counts."

Ron Capps posted the second quickest pass in Funny Car history and qualified second with a 3.843 at 329.91 in his NAPA Auto Parts Dodge Charger R/T. Capps, a four-time winner this season, will go heads-up with Brandon Welch in the first round on Sunday.

Courtney Force is third with a 3.855 at 328.14, the third quickest pass in category history. Force, in her Traxxas Chevy Camaro SS, will hope to outlast Jeff Diehl in the first round. Jack Beckman, who clinched his spot in the Countdown to the Championship, is fourth with a 3.861 at 332.26 and is followed by Matt Hagan with a 3.872 at 332.51.

John Force, a 16-time Funny Car world champion, qualified seventh. Force won the first two races of the Western Swing in Denver and Sonoma, Calif. He swept the Swing in 1994 and will look to become the first driver to ever do it twice when he races Tommy Johnson Jr. in the first round Sunday morning.

In Top Fuel, Schumacher claimed his 80th No. 1 qualifier of his career and his first of the season with a Pacific Raceways track record time of 3.686 at 323.58 in his U.S. Army dragster. Schumacher, who clinched his spot in the Countdown, is a three-time Seattle winner. The eight-time world champion has raced to one victory in three final round appearances this season and will go head-to-head with Ron Smith in Sunday's first round.

"There were a lot of good cars and we weren't the last one to go down the track so we thought somebody was going to go faster," said Schumacher, who grabbed his first No. 1 since 2015 in Bristol, Tenn. "We're happy to go into race day as the No. 1 qualifier. We've had some serious problems to work through and figure out, and once we did, the small moves that bring you to that .68 run. That run won't win you races, though. It'll qualify you really well, but you still have to go out on race day when it's hot and run really well."

Steve Torrence enters eliminations in the No. 2 spot after pushing his Capco Contractors / Torrence Racing dragster to a 3.701 at 328.54. The Texan has won two races in four final round appearances this season. He will race Scott Palmer in the first round.

Recent Sonoma winner J.R. Todd is third with a 3.706 at 328.14 in his SealMaster dragster. He will battle Troy Buff to open eliminations. Reigning world champ Antron Brown is fourth, Clay Millican is fifth and two-time 2016 event winner Brittany Force is sixth.

Nobile sprinted to the No. 1 spot in Pro Stock with a 6.527 at 211.49 in his Mountain View Tire Chevy Camaro. The 2013 Seattle winner claimed his first top qualifier of the season and fifth of his career. Nobile, who is currently fifth in points, posted a runner-up finish two weeks ago in Denver. He will begin eliminations with a first round bye.

"Today the weather got a little bit better and the track got extremely better, so if we didn't improve our time, someone was definitely coming around us," said Nobile, who also led qualifying Friday night with a 6.549. "I know there was a little bit more in that run we made today, which is definitely comforting. Being No. 1 and knowing you can go a little bit faster is really cool. The car is on a rail. It's real consistent and it's real fast. Now it's up to the driver."

Bo Butner, who has raced to four runner-up finishes this season, qualified second in his Jim Butner Auto Chevy Camaro with a 6.530 at 211.73. Butner will race Alan Prusiensky in the first round. Points leader Greg Anderson is third with a 6.544 at 210.77 in his Summit Racing Equipment Chevy Camaro. Anderson, a seven-time 2016 winner and three-time Seattle winner, is matched up with Aaron Strong. His teammate and six-time 2016 winner Jason Line is fourth and is followed by Denver winner Allen Johnson in fifth.

Eliminations are set to begin at 11 a.m. PT on Sunday at Pacific Raceways.