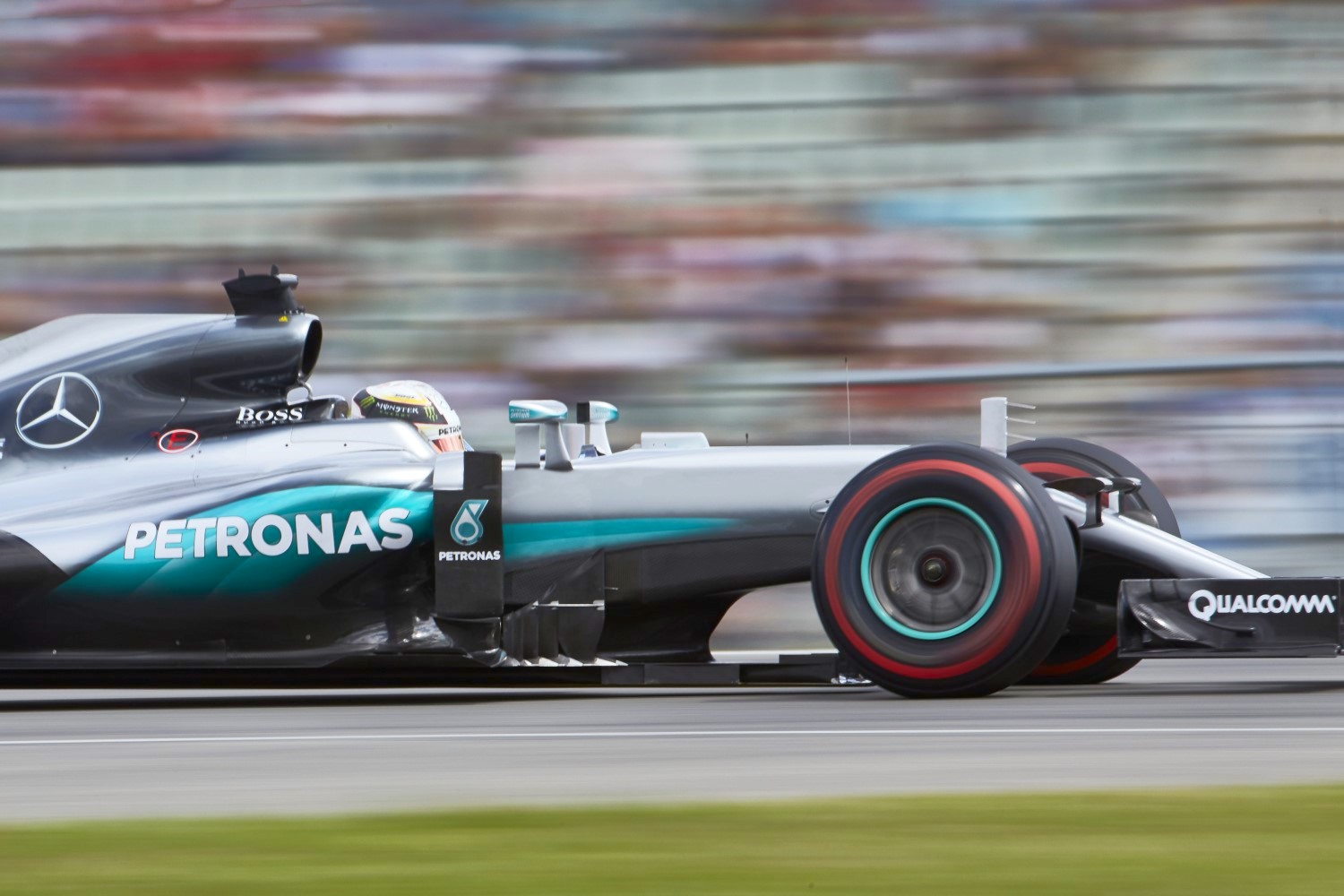 When polesitter Nico Rosberg choked in front of his home crowd and blew the start and fell to 4th, Mercedes teammate Lewis Hamilton took the lead in Turn 1 and by the end of the first lap his lead was over 1 second.

The race was over. No one was going to touch the Aldo Costa creation and Hamilton drove a perfectly controlled race.

Hamilton drove away and controlled the gap to second the rest of the way for his 6th win in the last 7 races.

Despite being beaten to the second corner by Verstappen, who made a superb start from fourth place, a rapid second stint by Ricciardo – as Red Bull split the strategies – would see the pair swap positions with Ricciardo able to carry the RB12 home to second place, with Verstappen completing the podium as Red Bull got both of its drivers onto the rostrum for the first time in 2016.

Verstappen passed Ricciardo around the outside of Turn 1 at the start and ran ahead of the Australian as their strategies diverged, with Verstappen on Super Softs and Ricciardo on the Softs.

Ricciardo moved closer to Verstappen during the third stint of the race when the roles were reversed and breezed past along the Parabolika, as the Red Bull drivers switched positions.

Ricciardo and Verstappen maintained their places until the end of the race, with the result moving Red Bull into second in the Constructors' Championship, 14 points clear of Ferrari.

"We had good start; from there on I think the pace was pretty good," explained Verstappen.

"I was enjoying it. We chose to do two different strategies on the cars, so I let Daniel by and from there I think we played really well as a team to get a double podium finish.

"That was the main target, to score more points than Ferrari, and that's what we did."

Rosberg, whose season is quickly becoming unraveled, came home 4th ahead of Ferrari's Sebastian Vettel in 5th as Red Bull has now pulled ahead of Ferrari in the F1 Constructors championship as the series heads into the summer break.

Rosberg made another stupid mistake and had to serve a 5-second penalty for forcing Max Verstappen off track while overtaking him under braking. He just does not have championship DNA.

Lewis Hamilton
What a day! Just awesome! I wasn't expecting to be as strong as I was today. I had a great start. We have been working really hard to get off the line faster and more consistently and that hard work has clearly paid off. A big thanks also to the guys in the garage, I'm glad they get a well-earned break now as they really deserve it. I'm super happy with today – especially after yesterday. When I personally fail, knowing from 23 years of experience that I could definitely have done better, I really kick myself. Today, I have the opposite feeling. I delivered the way I'm supposed to. I know that I had the pace, I worked the tires just right and I was never under threat from the guys behind. No mistakes this time either, so I'm very happy with that. It's awesome to go into the break on such a high. I was 43 points behind at one stage, so to keep working on the gap turn it around like that is great. Lastly, I just want to say a big thank you to the fans. So many of them have turned up here in Germany and they've been so supportive. That positive energy really drives me on, so a big thank you once again to them and I hope they have a great holiday. I'm definitely going to!

Nico Rosberg
[adinserter name="GOOGLE AD"]It was a difficult and disappointing day for me. I had a lot of wheel spin at the start. That was strange, because my start during the formation lap was good. That cost me the lead and then the next two places as well, which meant it was always going to be a difficult race from there. I was happy to fight back to P2 after a tough battle with Max and was very surprised that I got penalized. We also lost a lot of time in the pits, so a lot of things went wrong today. But that didn't count really at the end. The penalty made it impossible beat the Red Bulls. In general, I didn't feel as comfortable in the car as I have done in the past – especially with the rear tires. I had some problems with them today, so I need to get my head down and find out with my engineers what went wrong. I look forward to the summer break now and want to come back stronger. I hope everybody in the team can charge the batteries. It's very well-deserved.

Toto Wolff, Head of Mercedes-Benz Motorsport
First of all, what a fantastic drive from Lewis and a great feeling to win the German Grand Prix once again with Mercedes. This has been a very special weekend for the team and Lewis delivered a pretty perfect drive today: great start, great speed, great management. He's gone from a big deficit to now leading the championship, so it's been a very good streak. We have seen these waves of momentum in both directions and he is riding the crest right now. But as well as the sweet part of the afternoon, for Nico it was more bitter. The start didn't go well for him with big wheel spin but then he struggled for pace in the race, too. There were two big talking points. First the penalty. I think you will find lots of opinions but what we really look for is consistency in the decision making. Sometimes you see cars battling and there is no consequence, other times penalties are handed out. Today's felt tough because I think the fans want to see hard racing – and that's what it was. Then there was the pit stop to serve the penalty. In such a high-tech sport, we don't often have to use a stop watch in a manual process. Today, it didn't start, so we had to take the safe option to make sure Nico observed the right amount of time. Sometimes these things happen. Overall, I think we can be very pleased with our first part of the year. 11 wins from 12 is a nice statistic to take into the summer break – but we know that our rivals are continuing to improve, too. We will take the break, recharge the batteries and come back with fresh energy in Spa.

Paddy Lowe, Executive Director (Technical)
First, huge congratulations to Lewis and the team for a great victory at our home race here in Germany in front of our very supportive colleagues from Mercedes-Benz. It was enormously important to us to do a great job here, representing the 280,000 Mercedes employees worldwide. Lewis managed the race faultlessly from start to finish – delivering pace when necessary and saving the tires when required. The pit crew, too, did a great job on all three of his stops, allowing him to maintain the gap he had worked hard to build to those behind. For Nico, it was a less straightforward afternoon. His clutch was over-engaged at the start, leading to excessive wheel spin and an instant drop to P4. That gave us some work to do to get him back up to second – which we managed through a combination of a good strategy and some bold overtaking on Nico's part. Unfortunately, he was then given a five second penalty for the latter – which dropped him back once more. We did lose some time in the box as we took more safety margin than was required. But, as it turned out, this didn't affect the result. It became clear quite soon into the final stint that we didn't have the pace to compensate for the penalty. We were hoping that, with no soft tires remaining, we would manage to catch and pass the Red Bulls at the end once they ran out of rubber on the super soft – but to their credit they managed it very well, so all respect to them. As they say in motorsport, you're only as good as your last race – so it's good to have something to savor over the next month, as that's something we hadn't managed in either of the previous two seasons. A very nice way to pick up the holidays, which will provide everyone with a very well-earned break before we come back even harder in the second half of the season.