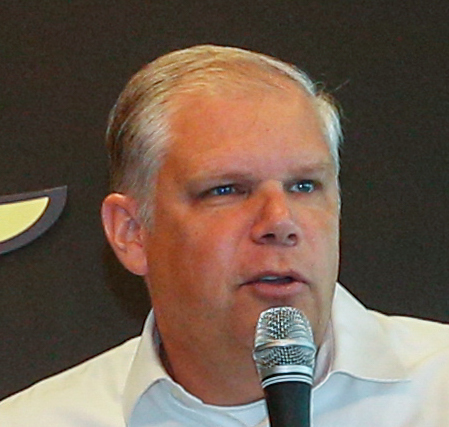 T.E. McHALE: Good morning, everybody. Thanks for joining us for this latest in our series of media briefings throughout the 2016 I'm going to say motorsports season, because while our focus is normally on IndyCar activities during these, today we're going to divert a little bit and talk about the advent of a very exciting program that got its debut in front of the public on Thursday with the NSX GT test sessions.

Our guests today, to my right, most of you know, Art St. Cyr, president of Honda Performance Development. We're also joined by Lee Niffenegger, who is the project leader on the NSX GT project development.

We'll start getting a comment from Lee, kind of an overview of Thursday's activity and what was accomplished and how we feel coming out of those two, albeit very brief sessions, but there was a session early Thursday morning and midday on Thursday, a car was out for both of those. Give us a little sense of the postmortem.

LEE NIFFENEGGER: I mean, the main point of us being here on Thursday, unfortunately we didn't get to run yesterday because of the weather, was for us to get an opportunity to run against multiple cars in the category. Obviously everybody who is racing this weekend was also out on the test day. It gave us an opportunity to see where we stand.

We did some additional tuning activity based on some of our previous private testing, then we'll carry that program on in the future.

T.E. McHALE: As Lee suggested, we had hoped to get the car out for yesterday's practice session as well. Obviously the weather made that impossible. I guess the next question would be, going forward, what are we looking at in terms of the next opportunity to put the car on the racetrack?

LEE NIFFENEGGER: We have some further private tests planned coming up in the next few weeks. We have FIA homologation testing coming up in September that's a fixed week every year. So between now and then we have several different types of tests as well as onâ€'track tests.

As far as any other public running, we're not really sure about that. We'll see how things go in the next few weeks. But may or may not do that in the near future.

ART ST. CYR: First of all, before I get into that one specifically, I do want to talk about, this is really an exciting weekend for us. We've been planning on this NSX GT3 car for a really long time. The fact that we actually are at this point is very exciting for us and we're really thrilled with the interest that this has garnered through people walking through the paddock.

Obviously moving further along the lines, since this is a GT3 program, we do look at having other teams run this vehicle. We have been pretty overwhelmed by the interest from private teams and that type of stuff looking to run this car. Right now we're not prepared to announce any of that, but we are looking at all of those types of things that we're doing moving forward from now.

But right now our immediate focus is our FIA homologation testing, as Lee said, in September.

LEE NIFFENEGGER: Homologation, for those of you not familiar, there's a dynamic test where they measure downforce, horsepower. Basically they set the basic vehicle parameters. But there also can be a long process of documentation and inspection that takes place. Even though you go to a test in September, it can be one, two, three months, depending on what the FIA is looking for as far as documentation, any things they want you to change on the car for safety, could be anything.

Obviously Honda, through our Japan counterparts, HRD, our other technical partners, we've been in close contact with FIA over this entire process. But as the car evolves, they'll go through and look at all our paperwork and make sure everything is what they want to see, make sure everything matches. That way, when the car does go out into competition, it's easy for World Challenge, any of the other series, to be able to understand what the car is and how it should be.

T.E. McHALE: With that we will open it to a few questions from the floor.

Q: What is the timing for announcement of teams that are going to participate in the NSX GT program?

ART ST. CYR: We don't have a specific timeframe when we're going to do that. Obviously we're evaluating the different series it's legal to run this car in. As I mentioned before, there's a lot of interest in running this car. We're evaluating that. It's pretty much an independent schedule for homologation. We will decide the teams. We want to get them as soon as possible, right, to start testing the car and start running the car.

Pretty much as soon as possible for us is when we want to start announcing our teams on that. But I don't have a solid date for that.

Sorry about the nonâ€'answer on that one. We don't know. We don't have a fixed deadline, By this date we're going to have a team. When we've checked all the boxes, that's when we'll announce the teams.

LEE NIFFENEGGER: I don't think it's necessarily involved with homologation. The intention is to go [with our announcements as soon as possible].

Q: Have there been any changes to the TL aero since last year?

LEE NIFFENEGER: There have been absolutely no changes to the aero package from where we ended in 2015.

Q: Will the car be able to run in Europe?

LEE NIFFENEGGER: Are you talking about the TLX?

LEE NIFFENEGGER: I mean, in theory you could [run the TLX in Europe], because we've worked with the SRO process of the G3 homologation, which is kind of like a preâ€'homologation that Lamborghini did with the Huracan. It's over in Europe, so it isn't something that has even been considered, because our emphasis at HPD is North American racing.

Q: What is it about sports car racing that draws universal interest from manufacturers?

ART ST. CYR: The obvious one is that, especially in GT3, it's the actual car, right? So it's based on the production model that you see out in the real world.

I can't speak for the other manufacturers, but from Acura's viewpoint, we want to compete on the racetrack. As we've always said that Honda and Acura racing is in our DNA, that's what we do. So to be able to race the Acura NSX and the TLX with other vehicles that it competes with in the marketplace, especially with Acura, kind of our mantra is precision crafted performance.

Working with American Honda, the performance side, this has a big P, this is the epitome of performance on the Acura side. This supports our brand building, racing, everything that we want Acura to be known as. That's what the interest is for us. I assume the McLarens and Mercedes and other manufacturers have a similar viewpoint on that.

ART ST. CYR: We get into speculation at this point when you talk about that stuff. The one very clear difference is that the GT3 side, the GTLMs, those types of cars are based off of a production model. Whereas IndyCar is a bespoke car, a bespoke engine. It is a much more upperâ€'level brandâ€'building type of activity from a marketing standpoint. It does have pinnacle technology type interest.

Again, I can only speak for Honda. We're in both because we think both of them are valuable. I can't speak to the other manufacturers on that one.

T.E. McHALE: Thank you all for joining us this morning. Enjoy the rest of your weekend.