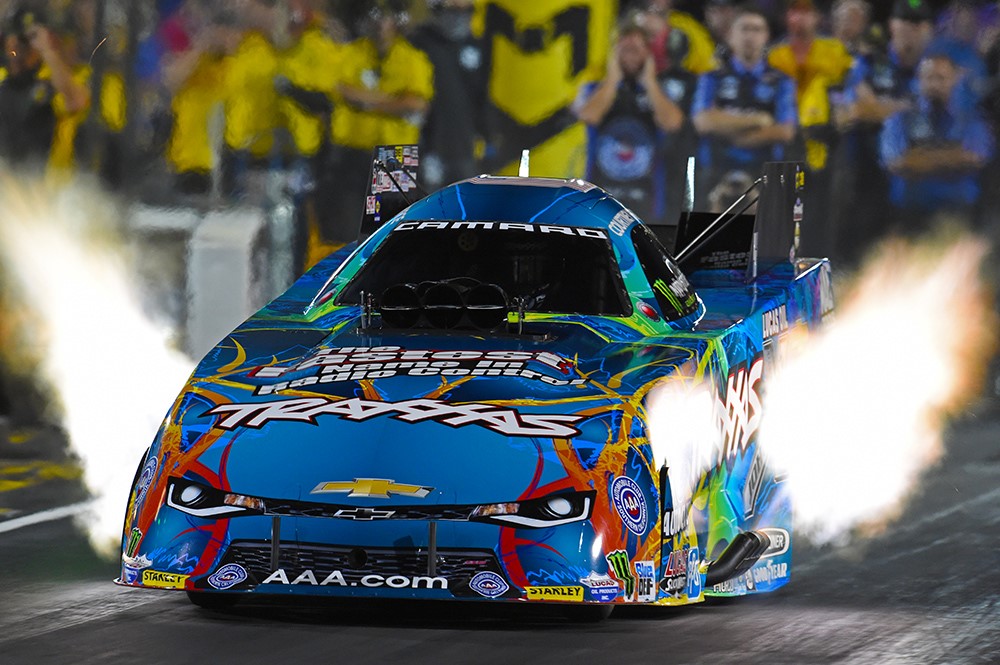 Torrence claimed his seventh No. 1 of the season and 12th of his career with a track record time of 3.776 seconds at 325.14 mph from Friday in his Capco Contractors dragster. He will race legendary Chris Karamesines in round one.

"The way the car has performed has been flawless all weekend," Torrence said. "It does give you a lot of confidence, and we're trying to catch Doug [Kalitta] and Antron [Brown] [in the Top Fuel points standings]. This is a great way to start race day, and you can't sweep the Swing unless you win the first one."

Series points leader and two-time Denver winner Brown qualified second in his Matco Tools dragster and will face Rob Passey in the first round. Richie Crampton will start third in the Lucas Oil dragster with a 3.813 at 310.27 and will meet Bill Litton in the opener.

By qualifying for this weekend's race, Brown and Kalitta became the first Top Fuel drivers to secure berths in the NHRA Mello Yello Countdown to the Championship, NHRA's six-race playoff series.

In Funny Car, Force raced to her first No. 1 of the season and 10th of her career based on her Friday track record time of 3.917 at 318.39 in her Traxxas Chevy Camaro. She was quickest in both Saturday sessions and carries a lot of momentum into her first-round meeting with Jim Campbell as she pursues her second victory of the season.

"It took a lot of hard work this weekend through a lot of late nights, and I am so proud of my guys," Force said. "It's been a lot of fun. I am in the new Traxxas Camaro body, so it's exciting. It's a great way to start the Western Swing by picking up eight bonus points. It's great to see all the fans packing the stands, and I am excited we were able to make all four runs and make some great passes."

[adinserter name="GOOGLE AD"]Six-time Denver winner John Force, who posted the first three-second run in track history on Friday and qualified with a 3.935 at 320.43 in his Realtree Peak Camaro, will race Jeff Diehl in the first round. Defending world champ Del Worsham qualified third with a 3.963 at 322.34 in his DHL Toyota Camry and will meet Todd Simpson in round one. Points leader Ron Capps will start 11th after posting a 4.062 at 309.84 in his NAPA Auto Parts Dodge Charger. He will square off with Don Schumacher Racing teammate Matt Hagan.

In Pro Stock, second-year Pro Laughlin was beaming after scoring his first career No. 1 qualifying position with a performance of 6.926 at 199.02 in his Gas Monkey Garage Chevy Camaro.

"Words can't even describe how I feel right now," Laughlin said. "Our team deserves it, and I want to thank everyone on this team. I am going to be tired tomorrow because I am not going to sleep tonight."

Laughlin, a Texas native, earned his first No. 1 in only his 21st career start. He is the 62nd different Pro Stock driver to claim a No. 1 spot in NHRA history. He said he had a great feeling about his chances to go low prior to that run.

"Honestly, I felt like we could get the No. 1 spot," Laughlin said. "We have the best race car this weekend. We came up and tested last week, and that made all the difference in the world. I have to thank my sponsor [Gas Monkey Garage], my dad [team owner Kenny Laughlin], and everyone at Gray Motorsports. We've had our highs and lows so far this year, and this is the highest of the highs so far."

Defending world champ Erica Enders qualified second with a 6.933 at 199.02 in her Elite Motorsports Dodge Dart and will race fellow Texan Chris McGaha in the opening round. Shane Gray qualified third in his Valvoline Nova Services Camaro with a 6.937 at 197.51 and will face local favorite and Colorado native Deric Kramer in round one.

Hines earned his first top qualifying effort of the season and 37th of his career in Pro Stock Motorcycle by clocking a 7.161 at 185.36 on his Screamin' Eagle Vance & Hines Harley-Davidson. It is his third No. 1 in Denver, and he will go for his fourth career Bandimere victory when he lines up against Scotty Pollacheck in round one.

"I've had great success here," Hines said. "My guys have given me a flawless motorcycle this weekend. Eddie [Krawiec, teammate] has been stealing all the No. 1s here lately, and it's nice to get a No. 1 on my side of the pit. The motorcycle is running pretty well. We are looking good for tomorrow, and we tried some things today, so I think we have a good tune-up for the race."

Krawiec will start second on his Screamin' Eagle Vance & Hines Harley-Davidson with a 7.177 at 186.72, and he will meet Karen Stoffer in round one. Angelle Sampey qualified third on her Precision Service Equipment Buell and will race fellow veteran rider Hector Arana Sr. on his Lucas Oil Buell in the opening round.